As we saw in the previous posting on this subject, there is a problem with having government pay for infrastructure . . . especially when we expect government to pay for everything else!  Of course, what is really at issue is that “the government” doesn’t actually pay for anything.  Either it collects taxes or borrows money . . . which it is supposed to repay by collecting taxes.


The bottom line?  The taxpayer pays for everything, not government.  The only question is whether the taxpayer is going is pay directly and own the infrastructure, or whether the taxpayer is going to pay indirectly and the government will own the infrastructure.
Thus, America and every other country faces a conundrum: Everybody agrees that something needs to be done about crumbling infrastructure, but nobody knows where the money will come from to finance it.
One thing is increasingly clear, government tax dollars will provide at best a fraction of the estimated $1.5 trillion needed (and if government actually does it, multiply that; did you ever hear of a government funded project coming in under budget?).  Adding to that, and as part of the proposed federal budget, state and local public programs will be facing decreased federal assistance. The alternative of private investment would concentrate the ownership and control of roads, bridges, sewage systems, and other basic infrastructure in Wall Street and a wealthy élite. 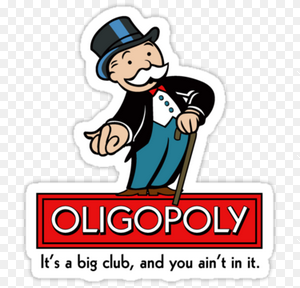 There is, however, an alternative, a “Just Third Way” that goes beyond government or oligopolistic ownership of America’s infrastructure, and its source of financing would come through competitive local banks with access to the discount windows of the twelve regional Federal Reserve Banks.
The for-profit “Citizens Land Development Cooperative” (“CLDC”), also referred to as the for-profit “Citizens Land Bank” (“CLB”) or “Community Investment Corporation” (“CIC”), is one of several innovative credit financing vehicles aimed at realizing a free enterprise vision for “re-people-izing” the future of the American economy and government.
The CLDC is a keystone of a new private sector strategy known as “Capital Homesteading,” which recognizes the ownership of productive capital as a new right of citizenship and supplemental source of personal income. 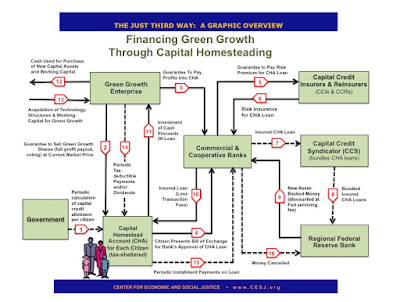 The CLDC is designed to finance livable and inspiring “new communities” in which every worker and resident would be afforded the right and the effective means to participate personally in capital ownership accumulations, profits and local decision-making. It functions just as the Rouse Corporation did in building Columbia, Maryland or the Reston Corporation did in building Reston, Virginia — but with a difference. The CLDC turns community residents into its principal shareholders.
The CLDC offers a planning framework for financing local infrastructure to increase land values and attract new worker-owned industries and entrepreneurial opportunities. It can also provide financing incentives for introducing and commercializing advanced technologies that can be owned by local workers, create new private sector jobs, and enhance the economic growth of the community within local, national and global markets.
Outlined in the diagrams you can see by following this link is a national demonstration project for commercializing advanced technologies linked with broad-based ownership participation in land development among area residents and workers. The CLDC strategy can be implemented at the local, state, regional or national level. Its financing would not depend on existing taxpayer dollars or the past savings of the rich, but on the use of interest-free credit and asset-backed money repaid with future profits to be generated by growing businesses and future user fees.
#30#
Posted by Michael D. Greaney at 6:00 AM