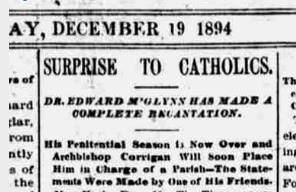 Somehow, today shaped up to be “Fabian Friday.”  It wasn’t planned, it just turned out that way.  It is astonishing, though, how often we find news articles from Days Gone By that contradict “what everybody knows,” e.g., the claim that Father Edward McGlynn, who advocated socialism and was excommunicated for disobedience in 1887, “never recanted” his socialist views, proving that the Catholic Church either never condemned socialism or changed its teachings on private property.   According to the New York Times and a large number of other newspapers, however, Fr. McGlynn recanted on January 19, 1894.  And on to other Media Mythbusters:


• Fascinating Fabian Facts.  While researching possible ties between the New Deal of President Roosevelt and Fabian socialism to compare it with the proposed Green New Deal and its roots in democratic socialism, we came across this statement by noted Fabian socialist George Bernard Shaw: “Under [Joseph Stalin] the Soviet government has turned communism into Fabianism.  But the Communists won’t take our name so we must take theirs.  After all, Russian communism is nothing more than the program the Fabians have been preaching for forty years.”  (The Washington, DC Evening Star, Friday, November 27, 1931, B-11.)  Interestingly, the Fabian Society claims to a socialist organization whose purpose is to advance the principles of democratic socialism.  (Margaret Cole, The Story of Fabian Socialism, 1961; George Thomson, “The Tindemans Report and the European Future,” Address to the European Movement, March 1, 1976.)  Prominent members of the Fabian Society include R.H. Tawney, who was on the Executive of the Society from 1920 to 1933, and John Maynard Keynes’s protégé, E.F. Schumacher, who was a member of the New Fabian Research Bureau.  The coat of arms of the Fabian Society is the Wolf in Sheep’s clothing, adopted because of their tactic of infiltrating organizations to turn them socialist without calling it socialism.
• Socialism That is Not Socialism (Except When It Is).  In today’s Wall Street Journal, Alan Blinder does an excellent job of advancing the Fabian program in “Democrats, Stop Pretending to Be Socialists” (A-17).  As Blinder argues, today’s democratic socialists are not really socialists because they are not in favor of total government ownership — just control.  Interestingly, this was Henry George’s argument (after a fashion) in Progress and Poverty (1879) in which he pointed out that by taking all the usufruct (“fruits of ownership”) in the form of all rent and profits on land use as a 100% tax (“the single tax”), the State could become the universal landlord without actually calling itself so or taking title.  (Progress and Poverty, p. 406.)  Even more interesting, George also claimed that his system was not socialist, but not because of the separation of ownership and control.  Rather, it was because his definition of socialism only applied to primitive and barbarian societies; an advanced industrial society was, according to George, ipso facto not socialist, even if the State owned 100% of everything.  Of course, from a legal (and Just Third Way) perspective, if you take away control or enjoyment of the fruits (income), you have taken away ownership.  This is a fundamental legal principle.  As Louis Kelso noted, “Property in everyday life, is the right of control.” (“Karl Marx: The Almost Capitalist,” American Bar Association Journal, March 1957.)  Blinder’s basic error appears to be that he confuses regulation (a responsibility of the State to back up private efforts to maintain order and prevent or punish harm) and control (property).
• FDR’s Brain(s) Trust.  It turns out that Samuel Rosenman, who suggested the idea of a “Brains Trust” to Franklin Delano Roosevelt, was influenced by Fabian socialism and the proposals of Henry George, having been mentored by Stuart Chase, a big fan of both George and the Fabians.  This makes perfect sense, as George’s book was the inspiration to form the Fabian Society in the 1880s, at least according to Edward Pease, whose idea it was, as he related in his book, A History of the Fabian Society (1925).  Raymond Moley, who was an FDR man until he decided that Roosvelt was undermining the Constitution, confirmed Fabian influence in his book, After Seven Years: A Political Analysis of the New Deal (1939).  The Brains Trust — soon shorted in the media to “Brain Trust” — seems to have been inspired by the New Fabian Research Bureau, on which E.F. Schumacher (author of Small is Beautiful, 1973, and A Guide for the Perplexed, 1977, as well as at least one Fabian Tract, Export Policy and Full Employment: Fabian Research Series No. 77, 1943), a member of the “inner circle” of the Fabian Society, served.
• Is Distributism Socialism?  Although the voices claiming that G.K. Chesterton and Hilaire Belloc’s “distributism” (a policy of small distributed private property with a preference for family-owned farms and artisan-type businesses) is not socialism have been growing much weaker and fainter in recent years, there are still some holdouts.  Some can point to what Chesterton and Belloc really said and note that much of what today’s distributists advocate actually bears very little resemblance to what GKC & HB actually said or did.  Some simply deny it without explanation.  Increasing numbers, however, have found things they can twist and turn to claim that democratic socialism, distributism, and even Catholic social teaching are all just different aspects of the same thing.  We recall Michael Novak’s claim that what he meant by “democratic capitalism” is what Chesterton meant by distributism, and Martin Gardner declaring that what he meant by “democratic socialism” is what Chesterton meant by distributism.  That, of course, makes everything crystal clear.  Evidently it doesn’t matter what you say, as long as you scream loudly enough, and attack anyone who disagrees with you. 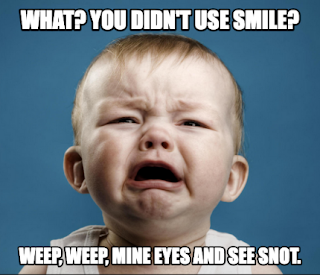 • Shop online and support CESJ’s work! Did you know that by making your purchases through the Amazon Smile program, Amazon will make a contribution to CESJ? Here’s how: First, go to https://smile.amazon.com/.  Next, sign in to your Amazon account.  (If you don’t have an account with Amazon, you can create one by clicking on the tiny little link below the “Sign in using our secure server” button.)  Once you have signed into your account, you need to select CESJ as your charity — and you have to be careful to do it exactly this way: in the space provided for “Or select your own charitable organization” type “Center for Economic and Social Justice Arlington.”  If you type anything else, you will either get no results or more than you want to sift through.  Once you’ve typed (or copied and pasted) “Center for Economic and Social Justice Arlington” into the space provided, hit “Select” — and you will be taken to the Amazon shopping site, all ready to go.
• Blog Readership.  We have had visitors from 34 different countries and 45 states and provinces in the United States and Canada to this blog over the past week. Most visitors are from the United States, Canada, Australia, the United Kingdom, and Kenya.  The most popular postings this past week in descending order were “The Purpose of Production,” “Thomas Hobbes on Private Property,” “A New Vision for Ireland?” “The Social Justice of . . . Adam Smith???” and “News from the Network, Vol. 12, No. 10.”
Those are the happenings for this week, at least those that we know about.  If you have an accomplishment that you think should be listed, send us a note about it at mgreaney [at] cesj [dot] org, and we’ll see that it gets into the next “issue.”  If you have a short (250-400 word) comment on a specific posting, please enter your comments in the blog — do not send them to us to post for you.  All comments are moderated, so we’ll see it before it goes up.
#30#
Posted by Michael D. Greaney at 6:00 AM