One of the most frequently heard questions about the proposed “Green New Deal” is where ire they going to get the long green to pay for it?  For those of you not familiar with 1890s slang, “long green” refers to paper currency — appropriate, since it was in 1893 that the populist leader Jacob Sechler Coxey, a theosophist, proposed measures that many consider the precursor of President Franklin Delano Roosevelt’s New Deal, a rip-off of Theodore Roosevelt’s Square Deal from 1910.


In 1894 Coxey led an army of the unemployed to Washington, DC, where they camped out for months after Coxey was arrested for walking on the grass . . . hence the populist rallying cry, “Keep Off the Grass” . . . no, really!  Once in a blue moon you still hear people say, “As dirty as Coxey’s Army,” or “As hungry as Coxey’s Army.”
Coxey’s program was for the government to carry out public works (infrastructure such as roads, bridges, etc.) to create jobs and rebuild the country.  Many projects had been abandoned after the Panic of 1893 resulted in a “money famine” due to the fact that the U.S. reserve currency, the National Bank Notes, was “inelastic” and backed by government debt instead of private sector hard assets.
To finance the public works, Coxey demanded an increase in government debt, to be used to back new issues of United States Notes (“Greenbacks”) that would be expended on public works.  The program required United States Notes and not National Bank Notes, because United States Notes were direct issues of the U.S. Treasury, while National Bank Notes were issues of the National Banks.  In order to issue currency, the National Banks had to purchase government bonds of greater value than the notes they issued to ensure that they could be redeemed if a bank went out of business, resulting in a net decrease in the money supply!
There was, of course, a small matter that the U.S. government is not authorized under the Constitution even to issue the United States Notes in the first place.  The power to emit such “bills of credit” was removed from the draft of the Constitution during the debates because they didn’t want the government to be able to monetize deficits.  That, however, is a whole other issue, which involves the fact that a lot of people really don’t understand money, thinking somehow it is a special creation of government.
Now, it is not merely a coincidence that Coxey’s Army, the New Deal, and the Green New Deal all rely on exactly the same thing for financing, and it is exactly the wrong way to go about funding anything, especially public works.  There are many reasons for this, one of which has to do with how money is created. 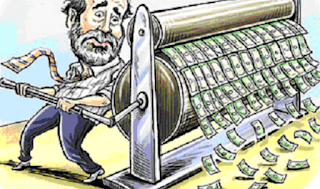 There are two ways two create money.  The way most people and all politicians think is that first you print up a big bunch of money, and then you figure out what to spend it on.  Or — the same thing, really — you want to spend money, so you print up what you want to spend.
Of course, “print money” doesn’t have to mean you actually crank up the printing presses, although it amounts to the same thing.  “Printing money” means printing money, issuing debt to back new currency or demand deposits, creating bits of blockchain and hiding them, and so on, and so forth.
The other way to create money is first to realize that “money” isn’t something independent of what people buy with it.  It’s the means by which you buy things!  In other words, if you buy, say, a loaf of bread for $1, the real price of that bread is not $1, but whatever it was that you exchanged for that dollar, e.g., a tenth of an hour of your labor.  In other words, you didn’t really buy a loaf of bread for $1, you bought a loaf of bread with a tenth of an hour of your labor.
Money comes in handy because the person who sold you a loaf of bread doesn’t want a tenth of an hour of your labor, he wants a pound of ground beef.  When he buys a pound of ground beef, he isn’t really paying a dollar, he’s paying a loaf of bread.
And so on — and on, and on, and on. . . .
Using money makes extremely complicated transactions extremely simple.  Instead of purchasing a new car with 20 bushels of wheat, two cows, forty-three hours of labor, ten ounces of gold, a bag of feathers, a ton of coal, and six pairs of shoes, you give the car dealer $5,000, and the dealer uses those “dollars” to get what he wants, without having to trade a car every time he wants something.
In other words, you create money by producing something, and trading what you produce for what others produce.  If someone creates money without producing something, it’s essentially counterfeiting, even if the government does it.
So you can see what’s wrong with saying that the way to pay for a Green New Deal is to print money.  It won’t even do the trick to raise taxes on the rich.  For a tax to be just, the burden must be distributed equitably among taxpayers.
A tax is also not a punishment or a tool for “social engineering.”  It must also be used only for legitimate purposes of government, or it is unjust.  That means that if you tax the rich to pay for a Green New Deal, you have acted unjustly.
What about cutting military spending.  Fine.  Cut it.  And what are you going to do with all the people you throw out of work?  Where are you going to get the money to create jobs for them?
No, there’s a better way, and one that does not rely on manipulating the tax system or issuing debt-backed money and imposing a “hidden tax” of inflation.  And that is what we will look at in the next posting on this subject.
#30#
Posted by Michael D. Greaney at 6:00 AM