Be prepared for a large leap in the Dow today, probably ’way up, but it could also plunge.  No, that’s not satire, unfortunately.  It’s just the way the Wall Street gambling casino operates.  “Recession signs are increasing” say the pundits, so gamblers might start bidding up prices in order to sell short (most likely) in a later adjustment, or may lock in profits now from having gone long earlier.  The latter is less likely, because the recent decline would decrease profits and a sell-off would drive prices down even more.  If you want to outguess the market, however, just flip a coin . . . or start working on implementing the Just Third Way: 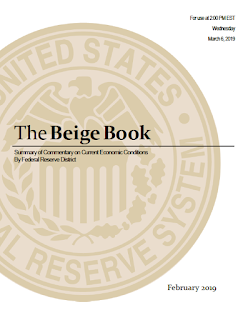 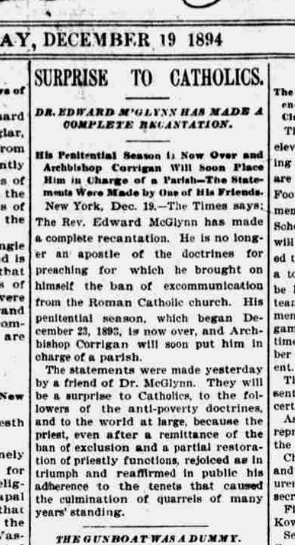 • Was Socialism Condemned?  Yesterday we came across newspaper articles from December 1894 that contradicted the claim made for over a hundred years by supporters of the “New Christian/Neo-Catholic” belief that the Catholic Church changes its doctrines, especially the teaching on private property.  According to legend, Father Edward McGlynn, a priest of the New York Archdiocese, was excommunicated July 5, 1887 for being a socialist.  He was reinstated in 1891 without recanting his socialist views because the Catholic Church changed its teaching on private property.  Legend, however, is not exactly accurate.  First, McGlynn was excommunicated not because he was a socialist, but because he refused repeatedly to go to Rome after being personally commanded by the pope to present himself and explain his views.  Second, McGlynn was reinstated not because the Catholic Church changed its teachings, but because he apologized to the pope, cardinals, bishops, and others he had insulted and lied to, accepted Rerum Novarum, and agreed to go to Rome.  After he returned from Rome, he was a priest in good standing, but his bishop refused to give him an assignment until and unless he recanted his socialist views.  When he did, he received a parish . . . and immediately declared he had not recanted, even though it had been reported in all the newspapers.  His bishop let the matter drop because McGlynn had become widely known as a liar and he did not want to start the whole thing back up again.  A generation later Monsignor John A. Ryan made claims similar to those McGlynn had made, but was more clever about it, and thereby managed to convince many people that the Catholic Church had indeed changed its teaching.

• Video Productions.  A short introductory video in a light vein is almost ready for release, and plans are afoot to experiment with quarter-hour instructional videos that can be distributed free, with a certificate program for those who want recognition for completing a series.  Those who are successful in completing a course would be eligible to receive the CESJ newsletter as well as their certificate of completion.  The idea is that every video should be able to stand alone, but for those who want to go deeper into the subject there would be downloadable study guides and discussion questions, as well as suggested additional readings.
• Anti-Worker Legislation?  A rather odd provision of the new guidelines for SBA loans that goes into effect April 1 of this year appears to deny their application to Coops and ESOPs.  As reported by the NCEO, “The provisions allow SBA-backed loans to finance ‘any transaction costs associated with purchasing a controlling interest in the employer, but not costs associated with setting up the ESOP or cooperative’ and mirror loans to create an ESOP. The guidance also specifies that ‘any seller who remains as an owner, regardless of percentage of ownership, must provide their guaranty.’ (The above is from Chapter 2, paragraph V.H.1-2.) The guidance also appears to deny the use of the expedited preferred lender program for employee ownership transitions, although the guidance only mentions loans for cooperatives, not for ESOPs. The implication is that the SBA will have to approve each loan on a case-by-case basis.”  Weirdly, the guidelines were issued as part of the “Main Street Employee Ownership Act.”
• Educating About Ownership You Can’t Have.  Another provision of the Main Street Employee Ownership Act is for the SBA to encourage education about worker ownership.  Judging from the guidelines just issued (above), what workers are to be taught about ownership is that it isn’t for them if the SBA has anything to say about it.
• Shop online and support CESJ’s work! Did you know that by making your purchases through the Amazon Smile program, Amazon will make a contribution to CESJ? Here’s how: First, go to https://smile.amazon.com/.  Next, sign in to your Amazon account.  (If you don’t have an account with Amazon, you can create one by clicking on the tiny little link below the “Sign in using our secure server” button.)  Once you have signed into your account, you need to select CESJ as your charity — and you have to be careful to do it exactly this way: in the space provided for “Or select your own charitable organization” type “Center for Economic and Social Justice Arlington.”  If you type anything else, you will either get no results or more than you want to sift through.  Once you’ve typed (or copied and pasted) “Center for Economic and Social Justice Arlington” into the space provided, hit “Select” — and you will be taken to the Amazon shopping site, all ready to go.
• Blog Readership.  We have had visitors from 40 different countries and 43 states and provinces in the United States and Canada to this blog over the past week. Most visitors are from the United States, South Africa, Canada, the United Kingdom, and Italy.  The most popular postings this past week in descending order were “Thomas Hobbes on Private Property,” “The Purpose of Production,” “A Just Third Way to Finance Green Infrastructure,” “Just Third Way Podcast 02/18/19,” and “Just Third Way Podcast 03/04/19.”
Those are the happenings for this week, at least those that we know about.  If you have an accomplishment that you think should be listed, send us a note about it at mgreaney [at] cesj [dot] org, and we’ll see that it gets into the next “issue.”  If you have a short (250-400 word) comment on a specific posting, please enter your comments in the blog — do not send them to us to post for you.  All comments are moderated, so we’ll see it before it goes up.
#30#
Posted by Michael D. Greaney at 6:00 AM