We're still having computer problems, but that will not stop "the Happy Revolution" . . . even though such things don't exactly make us completely happy!  (Obviously.)  Today we're featuring the (unedited) exchange we recently had on FaceBook with a commentator who is proposing a reform of the entire tax system, but — injudiciously in our opinion — has not considered the implications of his proposal, nor what taxation really is.


Here are the comments: 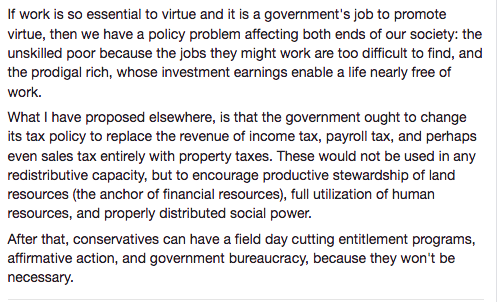 As you can see, there are a number of assertions made in these comments that are not supported.  The odd thing is that they were made in a "distributist" forum, which promotes widespread ownership of capital (whether land or technology), and any tax is a disincentive.  A property tax, therefore, is the last thing any distributist should be advocating.  There's more, however: 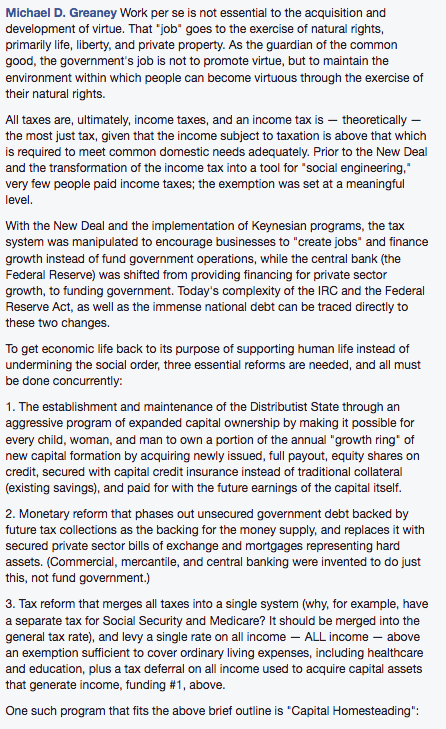 One or two comments need amendment, since we wrote this off the top of our head.  For example, the statement that "very few people paid income taxes" should be changed to "relatively few people paid income taxes," and the tax rate was very low.  Even the Social Security tax was supposed to be capped at 3% of the first $3,000 of income — an immense amount of money at the time the Social Security Act was adopted, 1935.

In any event, here is a link to the Capital Homesteading summary on the CESJ website: