We have a correction to make from our previous News from the Network.  Due to our unfamiliarity with a lot of computer and internet terminology (and just plain ignorance about what was going on), we referred to the broadcasts by Dr. Norman G. Kurland, president of CESJ, as "podcasts."  No, they are broadcasts, not podcasts.  This has caused some confusion, as podcasts are posted on the internet and can be listened to at any time, while a broadcast just goes out, and must be re-broadcast if it is to be heard again.  Still, the audience being reached via these broadcasts is rather phenomenal, as you will agree: 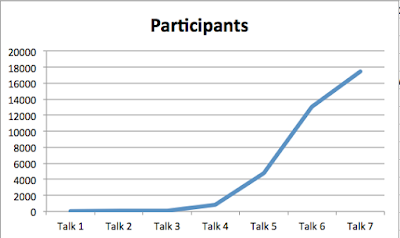 • This past Monday Dr. Norman G. Kurland made his seventh broadcast on the Just Third Way to people in forty-four countries in Asia, the Pacific Rim, the Middle East, and Africa.  About a third more people heard the broadcast as last week, a 33% increase to 17,500 — and (again) the final figures are not yet in from the Philippines — the broadcast is re-transmitted there by some students using a different system that evidently does not generate audience figures immediately.  As can be seen from the graph to the right, participation is still increasing dramatically over seven podcasts.  Interestingly, there were 22,400% more listeners in the United States of Mexico than in both the United States of America and the Confederation of Canada combined.  We also received notice that this last broadcast will be re-broadcast today, Friday, August 25, 2017, at 12:05 pm, Eastern Daylight Saving Time ONLY in North America: "The Just Third Way Hour, our program will be broadcasted at 12.05 p.m. on Friday at:

It can be listened via iTunes (on Mac computers and devices) - bottom link, or via Windows MediaPlayer - the upper link.  This broadcast is intended for listeners mainly in Northern America. (It will not be available for Europe, Africa, Asia).  The broadcast can be listened by up to 1000 listeners at this time. [Please don't ask us what all that means.} 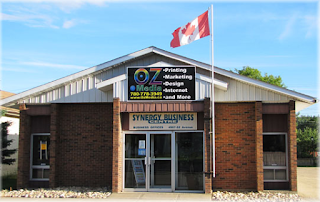 • Mr. Dan Parker of Whitecourt, Alberta, Canada, has accepted an appointment to the CESJ Board of Directors.  A long-time supporter of CESJ, Dan has been maintaining the website for the Global Justice Movement as well as running his full time web design business, OZ Media.  A member of the Whitecourt Chamber of Commerce, Dan has over 20 years experience working in the creative arts, including 8 years as a graphic designer, photographer and videographer in Toronto. He founded, designed and publishes the Community Advisor, a monthly magazine mailed out to every household and business in Whitecourt and the surrounding area.  Dan currently specializes in web design and writing about issues that the mainstream media misses or misrepresents.  Although he has studied the "social credit" proposals of Major Douglas in depth, Dan has stated, "I've looked at many change models and always come back to the fact that CESJ has designed one that is second to none."  He is looking forward to reviving the CESJ newsletter, and making it available both as a print and e-publication.
• Rev. Dr. Robert Brantley has accepted a position on the CESJ Board of Counselors.  Bob, a founding member of CESJ, put in many years as a member of the Board of Directors, and has been a regular participant at the rallies at the Federal Reserve, where he served as Master of Ceremonies.
• Technical difficulties have interfered with the completion of the first draft of Red Star Over Bethlehem, but all chapters are finished, with only the "wrap up" epilogue remaining.  A contact at the Vatican has declared the manuscript "brilliant," while one editor described it as "engrossing."  The intensive research done into the roots of social justice and its "competition" with all the various forms of socialism, ranging from Marxist communism, through Fabian socialism guild socialism, social credit, and the agrarian proposals of Henry George, to "Christian socialism," has clarified what happened over the past two centuries, and why so many people confuse social justice and socialism.
• The corrected manuscript of Ten Battles That Every Catholic Should Know has been submitted.  A new introduction is being drafted.  Even though CESJ is an interfaith group, many members and supporters might find the book interesting.

• Here’s the usual announcement about the Amazon Smile program, albeit moved to the bottom of the page so you don’t get tired of seeing it.  To participate in the Amazon Smile program for CESJ, go to https://smile.amazon.com/.  Next, sign in to your account.  (If you don’t have an account with Amazon, you can create one by clicking on the tiny little link below the “Sign in using our secure server” button.)  Once you have signed into your account, you need to select CESJ as your charity — and you have to be careful to do it exactly this way: in the space provided for “Or select your own charitable organization” type “Center for Economic and Social Justice Arlington.”  If you type anything else, you will either get no results or more than you want to sift through.  Once you’ve typed (or copied and pasted) “Center for Economic and Social Justice Arlington” into the space provided, hit “Select” — and you will be taken to the Amazon shopping site, all ready to go.
• We have had visitors from 20 different countries and 42 states and provinces in the United States and Canada to this blog over the past week. Most visitors are from the United States, Philippines, the United Kingdom, Australia, and Canada.  The most popular postings this past week in descending order were “What is the Common Good?" "Money Creators," "News from the Network, Vol. 10, No. 33,” “Social Justice and the Common Good,” and "Show Me the Money!”
Those are the happenings for this week, at least those that we know about.  If you have an accomplishment that you think should be listed, send us a note about it at mgreaney [at] cesj [dot] org, and we’ll see that it gets into the next “issue.”  If you have a short (250-400 word) comment on a specific posting, please enter your comments in the blog — do not send them to us to post for you.  All comments are moderated, so we’ll see it before it goes up.
#30#
Posted by Michael D. Greaney at 8:43 AM