One of the things we may have mentioned once or twice is that the world’s central banks are being used to fund government, while the tax systems are being used to finance new private sector economic growth.  As a result, there is never enough money so that everybody can become an owner of new capital, but there is always more than enough money for a politician to spend, spend, spend.
The problem is actually very simple once we understand the difference between banking and taxation.  The fact is that central banks were invented to finance private sector economic growth, while taxation was invented to fund government — and never the twain should meet.
Why?  Because central banks can create money, while taxes are drawn from existing money.  Thus, if the system works the way it’s supposed to, there should always be enough money in the private sector to keep the economy going, while the politicians are strictly limited in what they can spend to what the taxpayers give them. 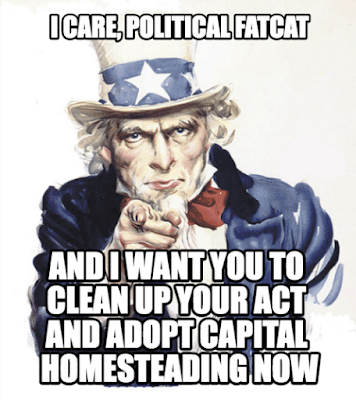 That’s why tax reform and monetary reform necessarily go together.  To make certain the private sector has enough money to meet the needs of commerce, agriculture, and industry for every person, the commercial banks backed up by the central bank create money only when the new money can be backed by private sector hard assets.  In order to ensure that the politicians have only the money they should have (and maybe just a little bit less. . . . to encourage thrift and efficiency), the only money they get should come through direct taxation.
Combine tax and monetary reform with an aggressive program of expanded capital ownership — financed by the commercial banks backed up by the central bank and made more feasible by a drastic overhaul of the tax system — and any country in the world can have a winner . . . to say nothing of a sound and growing economy.  Not growth just for the sake of growth, or to make the rich richer, but because people’s living standards are rising, and the growth comes naturally.
One proposal for achieving such a program is Capital Homesteading.  It might be a good idea to check it out.  It’s not as if the current system couldn’t stand a little reform. . . .
#30#
Posted by Michael D. Greaney at 6:00 AM