According to the Project on Middle East Democracy (POMED), United States Secretary of State Rex Tillerson recently announced that the Department of State is drafting new statements of purpose, mission, and ambition.  These will jettison the U.S.’s commitment to justice, democracy, and personal liberty.  As POMED Executive Director Stephen McInerney said,


Such a move is especially alarming in light of other statements that suggest that this administration may seek to diminish the role of justice and democracy in U.S. foreign policy.  Changing policy in that way would not only be antithetical to basic American ideals, but would also benefit autocratic regimes and jeopardize U.S. security. 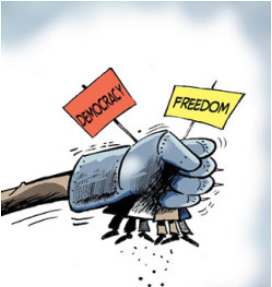