While we have some bad news this week, we thought we’d start out with a little — or a lot — of good news.  Somewhat to our surprise, the weekly talks given by Dr. Norman Kurland have proved phenomenally popular . . . everywhere except in the United States, where many of these ideas originated!  There are more than twice as many listeners tuning in from Russia than from the U.S.  As for the Philippines, roughly a third of the total listeners (numbering in the thousands now) come from that country: 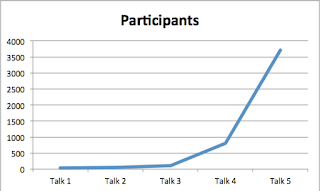 • This past Monday Dr. Norman G. Kurland gave another talk on the Just Third Way over the internet to people in thirty-two countries in Asia, the Pacific Rim, the Middle East, and Africa.  Nearly five times as many people attended the session as last week, a more than 360% increase.  As can be seen from the graph to the right, participation has increased dramatically in just five sessions.  Most of the participants, nearly 33%, came from the Philippines, with the rest of the Pacific Rim countries not far behind.  Interestingly, there were more than twice as many listeners in Russia as in the United States. 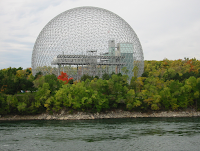 • CESJ was saddened recently to learn of the death of Leslie Dean Price of the CESJ Board of Counselors.  Mr. Price was founder and Chairman of Equitech International, LLC, a Virginia-based systems integration firm whose mission is to meet the challenge of R. Buckminster Fuller: “How do we make the world work for 100% of humanity in the shortest possible time through spontaneous cooperation without ecological offense or the disadvantage of anyone.”  The firm, made up of accomplished architects, engineers, scientists, professional managers and a network of advanced technology companies, focuses on the integration and commercialization of advanced proven technology components to meet the world’s energy, water, waste disposal, telecommunications, human dwelling and other life support and community needs. 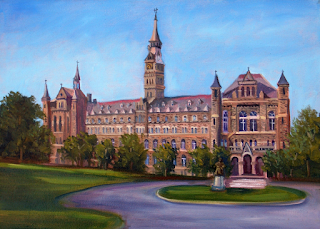 Mr. Price held the position of University Architect and Planner at Georgetown University for 20 years after which he served as Counselor for Federal Relations to the university’s President for 11 years.  Among his most noteworthy accomplishments at Georgetown was the preparation of the NEICES project, a 20-year comprehensive hydrogen age master plan to enable the campus to become energy self-sufficient by converting its medical waste, solid waste, and human waste into hydrogen-based fuels to meet the university’s electricity, water, heating and air conditioning needs.  Components of the NEICES master plan that were completed under Mr. Price’s guidance included: a 2.2 million gallon cryoaquatic reservoir for reducing nighttime energy costs; the first successful 10-megawatt clean coal atmospheric fluidized bed power generator; and the world’s largest (300 KW) photovoltaic array.  The latter became the linchpin of a national consortium between the NEICES team, NASA, Jet Propulsion Lab and other major players developing a stand-alone total energy system for lunar and space projects, an 8-year experimental project completed at Edwards Air Force Base in 1995.  He was also lead investigator for the development of the first Advanced Fuel Cell Bus Project supported by the Federal Government, which produced three near-zero-emission 30-foot buses.
Mr. Price worked with CESJ on several major projects: the New Birth Project for the District of Columbia, the establishment of the Institute for Economic and Social Justice at the University of the District of Columbia, and the New Millennium Project in East St. Louis, where he designed “Jubilee,” an advanced energy self-sufficient satellite new town to incorporate all of the patented technologies developed by Equitech.

Prior to coming to Georgetown, Mr. Price had his own architectural firm in California where he was architect of record for over 100 facilities from 1951-1968 and received several awards for his advanced facility design and planning criteria.  He was hired in 1968 to be Scientific Advisor and Superintendent for Advanced Hospital Systems for a life sciences research and engineering division of North American Rockwell, working with 200 specialists reassigned from the Apollo Programs to develop a 150-bed hospital as a robotics showcase.  He graduated with honors from the School of Architecture at the University of California at Berkeley.  During World War II, as an infantry intelligence sergeant in Europe, he survived Hitler’s attempted counter-offensive in the Ardennes, one of the great battles of the war, costing 60,000 Allied lives and 250,000 German lives.  He was an accomplished artist, painter, sculptor, poet, and cornetist and was the founder of the “Great Spirits Society.”
• Here’s the usual announcement about the Amazon Smile program, albeit moved to the bottom of the page so you don’t get tired of seeing it.  To participate in the Amazon Smile program for CESJ, go to https://smile.amazon.com/.  Next, sign in to your account.  (If you don’t have an account with Amazon, you can create one by clicking on the tiny little link below the “Sign in using our secure server” button.)  Once you have signed into your account, you need to select CESJ as your charity — and you have to be careful to do it exactly this way: in the space provided for “Or select your own charitable organization” type “Center for Economic and Social Justice Arlington.”  If you type anything else, you will either get no results or more than you want to sift through.  Once you’ve typed (or copied and pasted) “Center for Economic and Social Justice Arlington” into the space provided, hit “Select” — and you will be taken to the Amazon shopping site, all ready to go.
• We have had visitors from 32 different countries and 42 states and provinces in the United States and Canada to this blog over the past week. Most visitors are from the United States, Poland, the United Kingdom, Canada, and Ireland.  The most popular postings this past week in descending order were “A Few Essential Tweaks to Social Security,” “News from the Network, Vol. 10, No. 31,” “The Social Security Tontine,” “How Not to Save Social Security,” and “A Taxing Problem.”
Those are the happenings for this week, at least those that we know about.  If you have an accomplishment that you think should be listed, send us a note about it at mgreaney [at] cesj [dot] org, and we’ll see that it gets into the next “issue.”  If you have a short (250-400 word) comment on a specific posting, please enter your comments in the blog — do not send them to us to post for you.  All comments are moderated, so we’ll see it before it goes up.
#30#
Posted by Michael D. Greaney at 9:43 AM