Yesterday we noted that to get Social Security out of the hole it’s in, if everyone (or at least most people) in an economy owned sufficient labor and capital to produce enough marketable goods and services to generate income sufficient to meet the needs of someone and his or her dependents, the economy would be in balance, and justice would have an easier time of it.  Okay, those weren’t our exact words, but they’re close enough to what we meant. 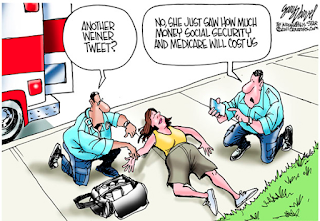 Now, keep in mind that we’re not in any way saying to get rid of Social Security and replace it with what we’re proposing.  All we’re saying is that if you expect Social Security to do anything other than give a big boost to national bankruptcy, you’d better be prepared to take some of the burden off of it.
Keep Social Security as the safety net it was always intended to be, and keep all the promises that have been made, but consider a few "Capital Homesteading" changes, viz.,
·      Make receipt of additional benefits, including increases in current benefit levels, need-based.  After all, for centuries you had people contributing to the upkeep of the poorhouse, but nobody felt cheated if he had paid in for years and never took up residence.  And what you pay into Social Security is not a contribution, but a tax.  Nobody feels cheated if he buys auto insurance and doesn’t have a flaming wreck.  In any event, you don’t own what you pay in.  That’s right.  Read the Social Security Act very carefully, and then look up Flemming v. Nestor (1960).  The Congress giveth, and the Congress can taketh away at any time for reasonable cause . . . and being broke is “reasonable cause.”
·      Merge the payroll tax into the general tax rate.  Stop this nonsense about having an entirely separate tax system for Social Security.  What with the government using any surplus, anyway, it’s going to have to make up any future shortfalls out of general tax revenues, so they might as well stop the sleight-of-hand now while there’s still time.
·      Make everybody eligible to receive benefits at birth . . . if aggregate annual family income from ALL sources falls below a certain threshold, say $100,000 for a “typical” family of four ($30,000 for non-dependents, $20,000 for dependents).  Rather than hand out cash, however, give non-transferable vouchers whenever possible.  Don’t cut off benefits if someone gains two cents worth of income, however.  Have a dollar-for-dollar reduction instead.  People wouldn’t get hurt, but there would be an incentive to become productive — and no tax penalty for doing so.
·      Make certain everybody has the opportunity and means to purchase enough capital to pay for itself and generate an income when someone can’t find work or can’t work, thereby taking a lot of the pressure off of Social Security.
The problem is, Where is the money to come from so that ordinary people without savings or collateral can get some and buy the capital they need to supplement or replace what they can produce by their labor?  After all, why should a rich man lend money to a poor man to buy capital so he can go into business . . . and compete with the rich man?
Well, as Moses Maimonides said, to give a gift or a loan to someone to form capital, or go into partnership with him (or her), is the highest order of charity.  (Mishneh Torah, Laws of Charity, 10.7)  Are you meshega?  The rich, those gonifs, are selfish mamzers.  They don’t lend or give for nothing.
Fortunately, there’s oy weh, oops, a way to finance new capital formation (or even buy existing capital) without going to the rich — and it doesn’t harm the rich, either; it’s probably not a good thing to do, to pretend to help some people only by harming others — and we’ll look at that next Tuesday.  This coming Monday we have something else planned.
#30#
Posted by Michael D. Greaney at 6:00 AM