We’ve been given to understand that the phenomenal increase in listeners to the CESJ weekly podcast featuring Dr. Norman G. Kurland, president of CESJ, is . . . well, phenomenal.  There has been a (try not to gasp too loudly) 33,741% increase in audience size over the past six weeks — and we haven’t even started podcasting to North America.  Tellingly, the ideas of the Just Third Way, while they are based on “traditional” American values, are finding more acceptance overseas than in the U.S.: 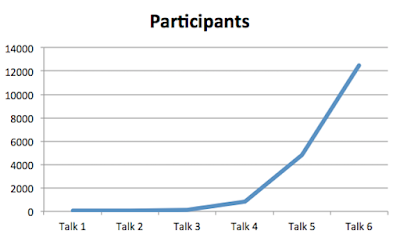 • This past Monday Dr. Norman G. Kurland made his sixth podcast on the Just Third Way to people in forty-one countries in Asia, the Pacific Rim, the Middle East, and Africa.  More than two-and-a-half times as many people attended the session as last week, a 160% increase to 12,500 — and the final figures are not yet in from the Philippines (last week’s preliminary figure for the Philippines was under by more than a thousand listeners; the different system there does not yield the actual amount for several days, as there are always more to be counted).  As can be seen from the graph to the right, participation has increased dramatically in six podcasts.  Most of the participants, nearly a fifth of all listeners, came from the Philippines, with the rest of the Pacific Rim countries not far behind.
• As a result of a meeting with an official in the Arlington Catholic Diocese, CESJ is exploring the possibility of producing some short videos to educate people in the Just Third Way.  A number of people, including a professor of Thomist philosophy, have expressed interest.  It’s felt that an “interfaith” approach would be most useful to everyone, stressing the universal applicability of certain key principles embodied in the social teachings of the Catholic Church, but also being found in all the major religions; what the Anglican writer and professor C.S. Lewis called “the Tao” or the Way, common to every human being.
• Work is almost completed on the first draft of Red Star Over Bethlehem, a look at the development of the idea of “social justice” over the past two centuries.  One reviewer connected with the Vatican has described parts of the draft as “brilliant,” while others have mentioned
• We just received the following comment from a “social crediter” (Major Douglas’s social credit being a spin-off of Fabian socialism) in Canada: “I've looked at many change models and always come back to the fact that CESJ has designed one that is second to none.”
• Here’s the usual announcement about the Amazon Smile program, albeit moved to the bottom of the page so you don’t get tired of seeing it.  To participate in the Amazon Smile program for CESJ, go to https://smile.amazon.com/.  Next, sign in to your account.  (If you don’t have an account with Amazon, you can create one by clicking on the tiny little link below the “Sign in using our secure server” button.)  Once you have signed into your account, you need to select CESJ as your charity — and you have to be careful to do it exactly this way: in the space provided for “Or select your own charitable organization” type “Center for Economic and Social Justice Arlington.”  If you type anything else, you will either get no results or more than you want to sift through.  Once you’ve typed (or copied and pasted) “Center for Economic and Social Justice Arlington” into the space provided, hit “Select” — and you will be taken to the Amazon shopping site, all ready to go.
• We have had visitors from 28 different countries and 37 states and provinces in the United States and Canada to this blog over the past week. Most visitors are from the United States, India, Canada, Australia, and Poland.  The most popular postings this past week in descending order were “News from the Network, Vol. 10, No. 32,” “Democracy, Justice, and . . . Healthcare?” A Few Essential Tweaks to Social Security,” “Democracy and Monetary Justice,” and “Money, Power, Justice, and Democracy.”
Those are the happenings for this week, at least those that we know about.  If you have an accomplishment that you think should be listed, send us a note about it at mgreaney [at] cesj [dot] org, and we’ll see that it gets into the next “issue.”  If you have a short (250-400 word) comment on a specific posting, please enter your comments in the blog — do not send them to us to post for you.  All comments are moderated, so we’ll see it before it goes up.
#30#
Posted by Michael D. Greaney at 2:08 PM