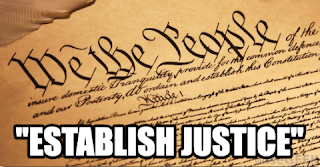 
We, the People of the United States, in Order to form a more perfect Union, establish Justice, insure domestic Tranquility, provide for the common defense, promote the general Welfare, and secure the Blessings of Liberty to ourselves and our Posterity, do ordain and establish this Constitution for the United States of America.
In the modern sense of the word, Justice “recognizes the inherent dignity and equal and inalienable rights of all members of the human family and is the foundation of freedom, justice and peace in the world.” (The first sentence in the Preamble of the United Nations Universal Declaration of Human Rights.)  Article 1 of the Declaration adds to our understanding of Justice as a natural right by declaring that, “All human beings are born free and equal in dignity and rights.”
If you stop to think about it, what else is there that a government should be doing?  Read the rest of the Constitution, and it’s just a list of applications of the virtue of justice.  This makes sense, because justice is the highest natural virtue, and a just and democratic government at any level has no business violating natural law.  Why? Because the State did not, and does not, create human beings . . . and knowledge of natural law comes from observing human nature and applying reason.
Just as we did for all other institutions (“social tools”), human beings create(d) the State.  What makes the State unique as a social tool is that it has a natural monopoly over the use of coercive force — which is only legitimate when those in charge of the State are there with the free consent of the people of the State.  The State is not a god, not even the “Mortall God” that the totalitarian philosopher Thomas Hobbes called it in Leviathan (1651), and cannot legitimately function on its own authority.
The State only has its power to serve people.  This is not only to establish Justice, settle conflicts, and set standards for all citizens and other institutions, but to promote and defend the human rights of all people within its borders, whether or not they are citizens, and to do the same for its citizens, wherever they are.
Since the State has the power to coerce people, however, democracy and justice require that people have some means to keep the State in line — and there is only one way of doing that: control over the purse strings.  As Henry C. Adams noted over a century ago, political power and sovereignty very quickly falls into the hands of those who control where government gets its money.  As ordinary people have lost property, their control over government has decreased in proportion.
That’s why for most people today, “democracy” means the same thing as “socialism” — “equality of results and condition” instead of the real democratic “equality of opportunity and means.”
“Own or be Owned!”  Political democracy is easily corrupted without an effective system of economic democracy.  Economic democracy must be based on universal citizen access to private property rights and profits from land, natural resources, and ever-advancing new physical and social technologies.  These last are important because in today’s world advancing technology of all kinds is increasingly the source of marketable goods and sources.
Fortunately, the world design science ideas of Louis Kelso, Mortimer Adler, Buckminster Fuller, Harold Moulton, Martin Luther King, Jr. and other futurists, give us hope.  Universal personal future access to equal ownership opportunities can be achieved without violating the private property rights of current owners over existing assets, or resorting to class warfare.
Is it possible for all citizens to become capital owners?  Yes.  By using “pure credit” loans from local commercial banks repayable with future profits (“future savings”) and collateralized with capital credit insurance and reinsurance, anybody can acquire capital that pays for itself.
And that is what we’ll look at tomorrow.
#30#
Posted by Michael D. Greaney at 6:00 AM