Guest Blogger: William R. Mansfield, Founder, Mansfield Institute for Public Policy and Social Change, Inc.
In one very real sense, it is extremely misleading to talk about “the Millennial Workplace” as if Millennials are somehow inherently different as human beings from every generation that has gone before.  Obviously that is not true, as basic common sense tells us.  If someone is human, he or she is as fully human, and is human in the same way, as everyone else, no ifs, ands, or buts.
On the other hand, today’s Millennial generation — ages seventeen to thirty-five or thereabouts — does face significantly different challenges from every previous generation in the world’s history.  They are entering the workforce (itself a relatively new concept on the world scene) and bringing with them a new perception of what work should be like.
This new perception affects power relationships in general and, naturally, how specific relationships between employers and employers, employers and employees, and employees and employees should be structured.  In order to create a “Millennial friendly” workplace, there are a few things we should know about the generation that will represent nearly 75 percent of the work force by 2030 — but, fortunately, they are no different from what we need to know about every other worker or person.
First — more than any other generation in history, Millennials are face to face with the specter of becoming “obsolete.”  Since the advent of the Industrial Revolution there has always been the fear of being replaced with a machine.  The answer, however, has always been retraining for another job, even if it is lower paying.
For the last century, the rate of economic growth in global markets hides the fact that all forms of human labor are becoming redundant as robotics, artificial intelligence and other advanced technologies have become increasingly the source of marketable productiveness. With the growing concentration of capital incomes from productive capital assets among fewer and fewer capital owners, however, and the consequent decrease in median consumption power among most citizens everywhere, the economic growth that could formerly be counted on to absorb “excess” labor made redundant has slowed dramatically within productive enterprises.
Added to this is the way in which government redistribution programs have also disguised the fact that fewer and fewer people are able to produce with labor alone, even when combined with technology other people own.  The so-called “Welfare State,” however, is also showing signs that it cannot be sustained for much longer on government deficit spending that now exceeds $66,000 per U.S. citizen.
Finally, the rate of technological advancement is displacing labor at an ever-accelerating rate.  It is not longer a question of whether robots will replace people, but when. 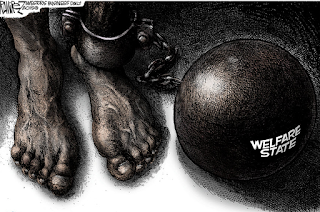 When these factors are combined, the situation appears hopeless for Millennials.  They know there is an extremely high probability that it is only a matter of time before they become completely unnecessary in the production process, and an added burden to overloaded and nearly bankrupt government redistribution programs.
. . . hopeless, that is, within the current paradigm.
What is needed is a drastic shift to a more inclusionary free enterprise paradigm known as the “Just Third Way”, one that enables victims of the system to become its masters, without violating property rights of current owners over their existing capital.  And the only way to do that is by applying the three principles of economic justice (1. Participation, 2. Distribution, 3. Social Justice), and implementing and maintaining the four pillars of an economically just social order:
1.     A limited economic role for the State,
2.     Free and open markets as the best means of determining just prices, just wages, and just profits,
3.     Restoration of the rights of private property, and
4.     Widespread capital ownership. 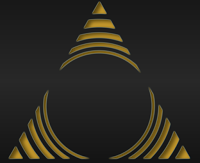 That’s all very nice, but those “four pillars” are a pretty tall order, aren’t they?  How can this be done at the level of the individual enterprise?
It’s not easy, but it can be done to a limited extent within the framework of existing law.  This is through what the Center for Economic and Social Justice (CESJ) calls “The JBM S-Corp ESOP,” where “JBM” means “Justice-Based Management,” and “ESOP” stands for “Employee Stock Ownership Plan.”
So how does this work within the context of the four pillars?
1.     Limited economic role for the State.  Unfortunately, little can be done at this point about limiting the power of the State, except for people to do the best they can to make their companies profitable without government subsidies, including tariffs or trade quotas.  By having a company that is organized as an S-Corp and owned 100% by the workers through an ESOP trust, the corporation pays no income taxes to the government at either the state or federal level, limiting government control to that small degree, at least. 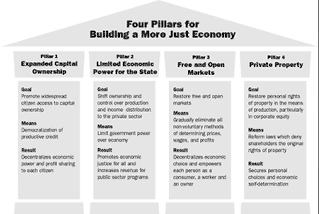 2.     Free and open markets.  Again, not much can be done at this point.  One company cannot buck the system and expect to do anything other than go under.  The best that can be done is what should be done, anyway: be honest and fair in all dealings with workers, customers, and shareholders.
3.     Restoration of the rights of private property.  Now, this is something that can be done if a 100% worker-owned company passes through the vote on all shares, and all future profits are used to (1) pay off loans to purchase new or existing shares that can be tax-sheltered within worker accounts within the ESOP trust; (2) pay out dividends or bonuses to supplement each worker’s incomes; (3) or to finance new capital growth assets of the company in ways that benefit all worker-owners.
4.     Widespread capital ownership.  This is the key, and what makes it possible to restore the rights of private property under existing law is that future profits are tax-deductible at the corporate level if the enterprise is 100%-owned by workers through an S-Corp ESOP. More universal access for every citizen to participate in the productive process as a capital owner is theoretically possible, but will require new Federal laws based on the expanded ownership benefits available to ESOPs.
Yes, this is little enough — but it is a great deal compared to what companies that are not oriented along Just Third Way lines can and will do.  And people can do more than what the economic system allows them to do.
#30#
Posted by Michael D. Greaney at 11:26 AM