3. Is Distributism a Parody of Christianity?

Last Thursday we continued our examination of “The ABC’s of Catholic Economics,” which the author of an article in Regina Magazine claimed was realized in the “distributism” of G.K. Chesterton and Hilaire Belloc.  Going through the letters G through M we found more discrepancies between Chesterton’s and Belloc’s concept of distributism and what the author of the article claimed was their system, and what the Catholic Church actually teaches as opposed to what the author claimed the Catholic Church teaches.
To continue our commentary, we again remind the reader to keep two things in mind, Chesterton’s and Belloc’s definition of distributism, and the first principle of Catholic social doctrine:
Distributism: a loose theory of socio-economics based on the natural law assumption that it is better to be an owner than not to own, with a preference for small, family owned farms and artisan businesses and enterprises.  When enterprises must be large, workers should own the company through equity shares, presumably that carry the vote and pay dividends.
First Principle of Catholic Social Doctrine: Everything in human society, including any program of social betterment, must be subject to the precepts of the natural law.
Keeping in mind that definition and that principle, we continue our commentary:
N is for New Deal, the massive expansion of the State ushered in by President Franklin Roosevelt and emblematic of the Welfare-Warfare State of the Modern Age. Distributists, including Dorothy Day, fiercely opposed this unprecedented government expansion. Peter Maurin criticized State-based welfare (as opposed to personal charity) as merely “passing the buck,” and most un-Christian.
Commentary:

Unqualified yes.  Justified by the economics of John Maynard Keynes (who some authorities believe to have been secretly a member of the Fabian Society), the New Deal was, to all intents and purposes, the implementation of the proposal of Jacob Sechler Coxey, whose “army” descended on Washington in 1894 to demand an increase in government debt to fund public works projects during the Great Depression of 1893-1898.  Coxey, who dabbled in theosophy and the Occult, was strongly influenced by the “New Christian/Neo-Catholic” movement of the nineteenth century that morphed into modernism.  The New Deal’s Catholic champion was Msgr. John A. Ryan of the Catholic University of America, whose doctoral thesis, A Living Wage (1906), was based on the theory that the natural law is changeable whenever the demands of social betterment require it.  Not surprisingly, Msgr. Ryan was in the forefront of those who egregiously misinterpreted Rerum Novarum to justify socialism and a vast increase in State power.  Msgr. Ryan was heavily influenced by the agrarian socialist Henry George, whose notions of Christianity were vague at best and who was involved in the Occult, George’s friend Father Edward McGlynn, a renegade priest of the Archdiocese of New York who promoted Neo-Catholic ideas, and Ignatius Loyola Donnelly, a former Catholic turned spiritualist, who was a strong supporter of George and who was a primary source for Atlantean studies (having been revealed to him by his spirit guides) for Madame Blavatsky’s theosophical “bible,” The Secret Doctrine.  Msgr. Ryan was responsible for destroying Fulton Sheen’s academic career, accusing Sheen of lying, cancelling his classes, and spreading false stories about him.  At one point Msgr. Ryan’s students accused Sheen of being a traitor to Christ and an enemy of the worker.
O is for Obedience.  The Church teaches us that there are two forms of law, divine and man-made. We, as Catholics, are obliged to obey the laws of God as we know them (natural law). As Saint Thomas Aquinas teaches us, “An unjust law (one not in accord with natural law) is no law at all.”
Commentary:
No.  Astonishing many people, it is impossible to obey divine law, that is, natural and supernatural law, at least in the sense that there is a specific legal code to follow.  The natural law (prudence, fortitude, temperance, and justice) and the supernatural law (faith, hope, and charity) give general norms only.  Duly constituted human authority must take the general norms of the natural law and pass laws conforming as far as possible to these norms.  In civil society, human authority is restricted to passing just laws, tempered with prudence, fortitude, and temperance, and may enforce the law with the coercive power of the State.  Religious authority may make rules in matters affecting faith, hope, and charity for those who share their beliefs, but under no circumstances can civil authority enforce these laws — at least, not legitimately.  No one may decide for himself on his own authority which laws to obey.  If a law is clearly wrong, but does not force you to do wrong personally, the proper response in social justice is to organize and get the law changed.  If a law is clearly wrong, and does force you to do wrong, you may disobey it, but you must also be prepared to accept the civil penalty for breaking the law.
P is for Pius XI, the pope of the Inter-War years (1922 – 1939). A great and gifted champion of the Church and humanity, Pius condemned racism and nationalism (Mit brennender Sorge), created the Feast of Christ the King to remind Christians that their first loyalty is to Christ not any earthly sovereign, and expanded Leo XIII’s teachings on politics and economics.
Commentary:
No.  Quas Primas (1925), the encyclical in which Pius XI instituted the Feast of Christ the King, was not a usurpation of civil authority and the establishment of a theocracy.  It was, in a very real sense, an expansion of Jesus’s answer to Pontius Pilate’s question, “Are you a king?” to which Jesus responded, “That is your word for it,” and went on to explain that His kingdom is not of this world, implying that Caesar had nothing to worry about from the Reign of Christ the King.  How, then, can anyone be both a good citizen and a good Catholic (or good religious believer of any faith)?  By having human authority pass laws in conformity with the natural law, and people obeying those laws.  It is, in that sense, not necessary for everyone on earth to be Catholic or even Christian to acknowledge Christ as King of the Universe.
Q is for Quadragesimo Anno, Pius XI’s encyclical issue[d] in 1931 confirming the teachings of Rerum Novarum and expanding them in great detail, praising workers’ co-operatives and family businesses, while condemning socialism and unrestrained capitalism.
Commentary: 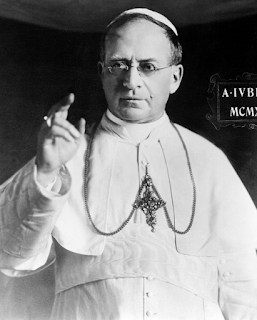 No.  To relegate Quadragesimo Anno (and its “second part” Divini Redemptoris) as a mere expansion of Rerum Novarum is to misunderstand completely what Pius XI was doing.  In Rerum Novarum, Leo XIII explained that it is possible for someone to be both a good Catholic and a good citizen.  This was important, because the claim of the liberals and socialists was and continues to be that it is impossible to be both a good Catholic and a good citizen unless the Church changes its teachings . . . which, in the Neo-Catholic movement and modernism, they proceeded to do.  Leo XIII gave the what and the why in Rerum Novarum, but left out the how.  In Quadragesimo Anno and Divini Redemptoris Pius XI explained the “act of social justice,” by means of which ordinary people can organize and act directly on the common good, reforming those institutions preventing them from being both good Catholics and good citizens.  Unfortunately, both Leo XIII and Pius XI, while identifying the vehicle by means of which ordinary people are empowered (private property in capital), did not explain how people are to become owners, except to suggest raising wages so people could save, which is not a good way of financing ownership.  (In his 1935 counterblast to the New Deal, The Formation of Capital, Dr. Harold Moulton explained in great detail why past savings are usually the worst choice to finance new capital, but we don’t need to go into that now.)  What is needed at this point is an encyclical specifically on the three principles of economic justice (Participation, Distribution, and Social Justice) and an explanation of how modern commercial and central banking can be used to finance widespread capital ownership without redistribution.
Tomorrow we will conclude our commentary on “The ABC’s of Catholic Economics” and answer the question as to whether distributism is a parody of Christianity.
#30#
Posted by Michael D. Greaney at 6:00 AM