2. Is Distributism a Parody of Christianity?

Yesterday we began an examination of “The ABC’s of Catholic Economics,” which the author of an article in Regina Magazine claimed was realized in the “distributism” of G.K. Chesterton and Hilaire Belloc.  The goal was to determine whether it is correct to say that what was presented in the article as “Catholic Economics” was, in fact, the case, or if what was presented was a distorted version of what the Catholic Church teaches.
The results so far have not been encouraging.  Going through the letters A through F we even found some discrepancies between Chesterton’s and Belloc’s concept of distributism and what the author of the article claimed was their system, to say nothing of what the Catholic Church actually teaches as opposed to what the author claimed the Catholic Church teaches.
To continue our commentary, we remind the reader to keep two things in mind.  One, Chesterton’s and Belloc’s definition of distributism (which appears to be consistent with what the Catholic Church teaches), and, two, the first principle of Catholic social doctrine:
Distributism: a loose theory of socio-economics based on the natural law assumption that it is better to be an owner than not to own, with a preference for small, family owned farms and artisan businesses and enterprises.  When enterprises must be large, workers should own the company through equity shares, presumably that carry the vote and pay dividends.
First Principle of Catholic Social Doctrine: Everything in human society, including any program of social betterment, must be subject to the precepts of the natural law.
With that definition and that principle in mind, then, we continue our commentary:
G is for Guild, the traditional way of organizing workers and employers in an harmonious, mutually supportive system. The Medieval guilds worked to care for their members, create self-sustaining economic systems, and give even the poorest members a voice in municipal government. 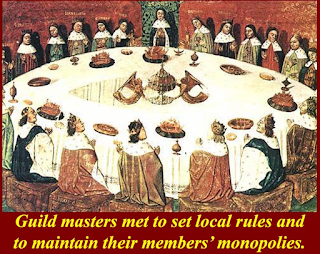 No.  Guilds were organizations for the benefit of masters (owners and employers), not workers.  Everything was stacked in favor of the Master.  Yes, the guilds cared for their members (up to a point) and filled a number of social roles that today have been taken over by the State.  Guild Masters might be permitted to sit on a city council, and sometimes (as with the Hanseatic League) even be the government, but ordinary workers were often in a worse position than many today, with little or no legal protection.  When the final remnants of the guilds were being dissolved in the early nineteenth century, Journeymen and Apprentices led the fight to abolish them.  The Catholic Church has recommended the formation of organizations similar to the guilds, but the idea is not some kind of “Catholic labor union.”  Rather, it is to provide a framework for organization that (unlike the guilds) empowers all the members of an organization so they can work on reforming institutions that inhibit or prevent the realization of essential human dignity.  We advocate the formation of “ownership unions” to fill the economic function of the guild, bringing together everyone as owners, not employer/employee.
H is for Home, the well-kept, safe, and holy environment for the educating and nurturing of children. If Distributism is the economic system of saints, then the home is where those saints are made.
Commentary:
The logic here is a little suspect, but not worth arguing about.  It is expressed as a matter of opinion, not fact, and doesn’t really have anything to do with the subject.
I is for Idolatry, the worship of that other than God. The idols of liberalism are false freedom and the omnipotent invisible hand of the market. The idols of socialism are the State and false progress. Both worship the great evil of untruth that the Church stands against.
Commentary:
No.  The idols of liberalism and socialism are the same thing: Collective Man himself.  This is based on the assumption that the collective created by man has rights that human beings created by God do not have.  Consequently, for the liberal and the socialist, everything — everything — including the natural law must be subordinated to the general betterment of society.  The way to discern true freedom and progress from the false notions of liberalism and socialism is to realize that, in Catholic teaching everything — everything — including social betterment must be subordinated to the natural law.  Further, the Catholic Church understands “the natural law” as based on God’s Nature, self-realized in His Intellect, reflected in each human being, and therefore discernible by the force and light of human reason alone; “law is reason” (lex ratio).  By “the natural law” the Catholic Church does not mean a private interpretation based on someone’s personal understanding of something he takes as “God’s Will.”  Law is not will (lex voluntas).  If something asserted as God’s Will violates or contradicts the natural law based on reason — regardless how strong the faith of the one asserting — it is wrong.  The natural law is based on God’s unchanging Nature, and cannot be tailored to suit someone’s convenience.
J is for Justice, Social, the phrase coined by Pope Leo XIII in the Nineteenth century. True social justice lies in peaceful class relations, natural law, and hierarchy.
Commentary:
No.  Leo XIII never used the term “social justice.”  In his day, it meant a vague program of social betterment that relied on serious, sometimes extreme distortions of Christian principles.  It was associated with the New Christian/Neo Catholic movement and the Occult.  The first pope to use the term was Pius XI in his 1923 encyclical on St. Thomas Aquinas, Studiorum Ducem, when he distinguished legal justice (a general virtue) from social justice (a particular virtue).  Prior to this, “social justice” had simply been a euphemism for socialism, a meaning it retains in many circles even today.  In Quadragesimo Anno (1931) Pius XI explained the problems with “religious socialism,” while in Divini Redemptoris he explained the problems with “scientific socialism” . . . and was immediately and widely misunderstood.  Leo XIII had addressed both in Rerum Novarum, and was also immediately misunderstood.  Properly understood, as presented by Pius XI, social justice is the particular virtue directed to the common good, the common good being understood as that vast network of institutions (social habits) within which people typically realize their individual good.  Social justice does not replace individual justice and charity, but makes individual justice and charity possible.
For some reason the article did not have anything for K or L, although mentioning Bishop Wilhelm Emmanuel, Freiherr von Ketteler (1811-1877) of Mainz or Chesterton’s friend Msgr. Ronald A. Knox for K, and the dignity of labor for L, would seem obvious.
M is for Maurin, Peter, who was Dorothy Day’s mentor and the co-founder of the Catholic Worker.  Maurin was a living example of blessed Franciscan poverty, having once slept in an abandoned coke oven while preaching and working as a miner. Maurin’s radical street preaching constantly stressed the need to live simpler, self-sufficient lives on the land.
Commentary:
No.  As is evident from the reading list that he provided Day, Maurin’s orientation, like that of Day, was that all things, including the natural law, were to be subordinated to the need for social betterment.  Paradoxically, his understanding of “blessed Franciscan poverty” was essentially a carbon copy of that of the Fraticelli, who, in his 1923 book, Saint Francis of Assisi, Chesterton claimed completely misunderstood the “testament of St. Francis.”
We will continue our commentary on Monday.
#30#
Posted by Michael D. Greaney at 6:00 AM