This brief series on “Philosophies at War” is not just of academic interest, nor is it particularly religious, although the issue is being fought out most visibly in religious circles.  Obviously, however, how we view the human person is key to how we understand the role of the State, the natural law, organized religion and, increasingly these days, the family, all of which are under attack today in one way or another.
To close out the series, then, we thought it would be a good idea to show where matters stand today in American Catholic Academia, the hierarchy of the American Catholic Church, and American politics.  The point is driven home by the fact that all three milieux are in better shape than their counterparts in other faiths and other countries, but that is not saying all that much. 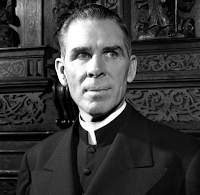 Today’s and tomorrow’s postings are taken almost verbatim from a brief series of emails that were, in large measure, the inspiration for this series.  (The actual trigger was obtaining a rare copy of Fulton Sheen’s Philosophies at War.)  Minor editing has been done to correct grammar and to hide the identities of people who might be offended to learn that their thought is not entirely consistent with the Just Third Way and natural law.
The first three emails resulted from a question regarding whether the supernatural virtue of charity could be considered part of the natural law that had popped up in the newsletter of a conservative American Catholic group.  The brief answer (which had been given before) is, no — the supernatural fulfills and completes, it does not replace or abolish, the natural.  The longer discussion is — 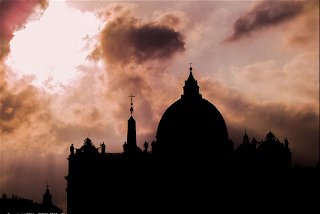 Dear Carlo:
We have to be careful of mixing the natural and the supernatural. Someone who conforms to the precepts of the natural law but does not conform to the supernatural law is not wrong, but incomplete. Christianity fulfills, it does not abolish the natural law; “Do not think that I have come to abolish the Law or the Prophets; I have not come to abolish them but to fulfill them.” (Matt. 5:17)
As Fulton Sheen pointed out in his autobiography, Treasure in Clay (1979), many people think that Jesus actually came to abolish everything that went before.  This, they believe, leaves them free to do as they will.
This, in fact, was the premise of the “New Christians” of the nineteenth century.  The term “New Christian” comes from the socialist Henri de Saint-Simon’s book, Nouveau Christianisme (1825).  Saint-Simon believed that charity, the “Third Dispensation” of the Holy Spirit, abolished justice, and that Heaven could be created on Earth.

This would be by eliminating the precepts of the natural law with respect to prudence, temperance, fortitude, and above all, justice, and substituting the supernatural law of charity. That is why “New Christianity” was often used as another term for socialism, and which Leo XIII made a special focus of his pontificate, culminating in Rerum Novarum, “New Things.”
No, as all recent popes have taken great pains to point out, charity is the soul of justice, not its replacement. Sheen called the natural law “the pagan virtues” and emphasized that one could only become fully human by acquiring and developing them. If, however, one wanted to become a Child of God, one must acquire and develop the supernatural virtues of faith, hope, and above all, charity, and become a Christian — in Sheen’s opinion.
Do not be deceived, however, by Sheen’s language.  As a Catholic priest, he could hardly say anything else. He was, nevertheless, fully aware that non-Christians are as fully human, and are human in the same way as Christians, and thus fall under the duty of conforming to the natural law, the “Reign of Christ the King,” as it manifests in this world . . . always keeping in mind that His kingdom is not of this world . . . which the New Christians forgot. As for the next world — that relies on conforming to both the natural law and the supernatural law, which each person must work out for him- or herself.
Yours in justice,
Just Third Way Blog

In response, we got a brief note from Carlo, saying he wanted to look up a few things before responding.  In the interim, however, we got an email from South America, asking about the contents of the newsletter, and a catalog from a conservative Catholic bookseller.  As this again raised the question of the role of the natural law, we sent another email before receiving the first response.  It was a little repetitive, but not very much.

Dear Carlo:
After we forwarded our comments on The Conservative American Catholic Newsletter today, we received a catalog from a conservative Catholic bookseller.  A significant proportion of the offerings are from the faculty at Conservative Catholic College and individuals involved in various groups dedicated to G.K. Chesterton and distributism.
Sadly, if we are to believe what is in the catalog, it appears that what now passes for “orthodox” Catholic thought in regard to the Church’s social teachings consists largely of warmed-over socialist pabulum and conspiracy theory.  There are books by admitted Fascists, socialists, Jew-haters, monetary crackpots — you name it.
There are, for example, at least a dozen books on “social credit,” a form of socialism based on Georg Friedrich Knapp’s “chartalism” and that spun off from Fabian socialism, yet is presented as “authentic Catholic teaching” despite all the papal warnings against socialism.  One of the books contains essays by a sexual deviant who boasted of his crimes — they are too disgusting to mention — and never repented.
By coincidence, over the past week we think we have discovered a major source of the perversion of Catholic social teaching.  This was the “New Christian” movement of the early nineteenth century that provided the basis for what is known today as Christian socialism, modernism, and the New Age.  This came from the work of the Comte de Saint-Simon who published a book called Nouveau Christianisme (“The New Christianity”) in 1825, which started what we would today call a New Age cult.  Some authorities trace the inspiration for Madame Blavatsky’s version of theosophy (that influenced Nazi occult and racial theories) to this strange body of thought.
According to The Catholic Encyclopedia, “Saint-Simonism” or “Saint-Simonianism” was essentially a new religion under the name of Christianity that attempted to base everything on brotherly love and faith and rejected reason and justice, and blended socialism with Catholicism.  It had its own “pope,” and (according to the Encyclopedia), Leo XIII was referring primarily to Saint-Simon’s “New Christianity” when he spoke of “new things” in Rerum Novarum.
New or Neo Christianity was/is explicitly socialist, and — despite the efforts of people like Chesterton and Fulton Sheen — continues to have a tremendous influence down to the present day in misunderstandings of Catholic social teaching.  Nor should we be particularly surprised at such widespread misunderstanding.  As Maurice Evans noted in his 1938 Le Bas Prize Essay, “Chesterton’s wit has made him one of the best read and least studied of all modern thinkers.” (Maurice Evans, G.K. Chesterton. Cambridge, U.K.: Cambridge University Press, 1938, 134.)
If any Catholic academic has fallen victim to “New Christianity” (as some of the Chesterton people appear to have done — just the other day I found a report of a Chesterton conference devoted to finding common ground with “New Age spirituality”), he will never listen to anything coming out of CESJ.  Sadly, many of the people caught up in this nonsense seem completely unaware that, for all their talk about God and the Church, all they’ve done is re-invent what Fulton Sheen called “Religion Without God,” putting in place something akin to Émile Durkheim’s “divinized society” with Collective Man represented by the “Mortall God” of the State at the center.
Yours in justice,
Just Third Way Blog