Conflict is unavoidable in any situation involving other people.  The art of management (or, if you will, servant leadership) involves to a great extent the ability to resolve conflicts in a just manner. That means respecting the natural dignity of every human person involved in the situation.
Within the Just Third Way, there are three critical factors to resolving conflict.  These are, 1) Solidarity, 2) Institutional structures for resolving conflicts when they arise, and 3) Capital ownership within a business enterprise.
Solidarity 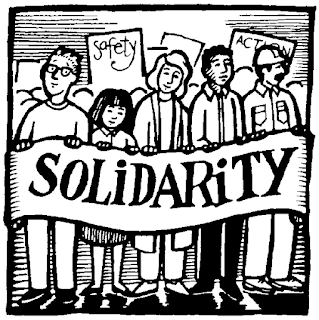 Solidarity, a key element of the Just Third Way, relates to the three principles of economic justice, 1) Participation, 2) Distribution, and 3) Social Justice.  Solidarity is acceptance by all members of the group of the basic principles that define the group as that specific group.
Solidarity is key to the effective functioning of the group as a group, as well as to acceptance of the rights of private property and free association that provide the “glue” holding society together.  Solidarity, however, presumes that all members of the group can understand, and then communicate effectively, the basic principles that define the group as that group.  This presents a problem if communication is ineffective.
The success of a business depends upon effective communication within the organization.  Managing communication and promoting healthy conflict resolution should, therefore, be a goal of management.  If nothing else, effective communication can decrease conflict that interferes with the proper functioning of a business enterprise.
For example, a study commissioned in 2008 by CPP Inc., the Myers-Briggs Company, revealed that workers spend nearly three hours per week dealing with conflict.  Compounded across all workers in the U.S., this results in 385 million working days per year.
This is a significant period of time devoted to activity that does not support productive activity either directly or indirectly.  Businesses cannot afford to lose that much potentially productive effort and resources to conflict.
Unless everyone in an organization or institution accepts the basic assumptions of that organization or institution, and accepts them in the same way, conflict can ignite from the smallest word or action and spark destructive responses and behaviors.  Unresolved or poorly navigated conflict can damage and even destroy relationships.
Conflict, however, does not have to be destructive.  Handled effectively, conflict can actually contribute to stronger, deeper relationships and can help to address ongoing problems and concerns.  Effective communication skills serve a key role in successfully resolving conflict, both in the home and in the workplace.
Institutional Structures for Conflict Resolution
There are two types of conflict in any organization, and thus two general methods of resolving conflict, depending on the kind of conflict involved.
The first type of conflict is that based on flaws in the institution itself.  As a “social tool,” an institution must be designed properly and used correctly, or it won’t work the way intended.  Conflict can — unintentionally — be built in to the organization. 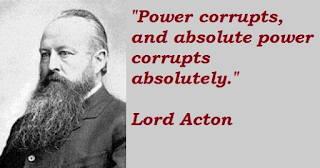 Institutional flaws, however, are often the ones most people ignore: something wrong in the structuring of power relationships at any level or all levels within the institution.  True, as Lord Acton noted, power tends to corrupt, and absolute power tends to corrupt absolutely.  That is why everyone within an institution must have the equal opportunity and means to acquire power so that power is broken up and shared.
Then, while solving institutional conflicts should be the job of those inside the institution or organization, the advice of an outside observer may be essential.  This is because people inside the institution can simply be too “close” to the problem and fail to see it.  Plus, where power is concentrated within an institution, leaders cannot address conflicts among different levels within the institution or recommend corrective actions.
If the institution promotes solidarity, and everyone goes along with it, institutional conflicts can often be resolved very easily.  If everyone within the institution shares power to resolve conflicts, and everyone wants the conflict to be resolved, everyone will work with others to help restructure the institution.
What happens, however, when the institution is restructured to promote the empowerment of all workers, but some feel others in the organization are manipulating them or otherwise taking unfair advantage?  Or suppose there are people who just aren’t getting along with others or with the institution as a whole?
This is the second type of conflict, personal conflict, and it is sometimes the most difficult to resolve.  It most often results from a feeling of powerlessness, which isolates people from their co-workers and others in society. 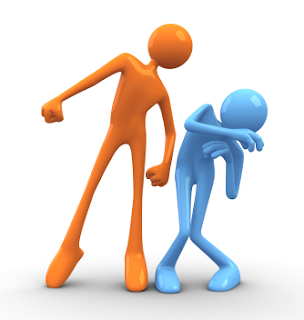 Traditionally, leaders and managers have often tried to resolve personal conflicts informally, on a one to one basis.  This can sometimes work . . . but don’t count on it.  When someone with power relates to someone without power, someone is going to feel as if he was imposed on . . . and it won’t be the one with power.
It is much better that there be some “institutional mechanism” in place to deal with personal conflicts.  This must be a part of the system itself, to deal with this kind of conflict effectively — or at all.
The specific structuring of a means of dealing with personal conflict within an organization must be carefully considered.  It is, after all, far too easy for people with the wrong kind of power to manipulate a grievance committee or arbitration board and use it to get rid of people they don’t want, cover up their own incompetence, or even seize even more power and concentrate it in their own hands to the ultimate detriment of the organization.
Any such mechanism must be objective, fair, and — especially — it must be perceived as such.  An arbitration board or committee can be objective and fair, but if people do not think so, it is useless.
In a “typical” company in which there are owners, managers, and workers, and never shall any of them meet on common ground, the perception of fairness, much less actual fairness, is virtually impossible.  No one is equal in status, so fairness and justice, which can only truly function among equals, are out of the question.
There is, in fact, only one proven method to provide a foundation for fairness and justice in the workplace, and to lay the groundwork for effective conflict resolution.  And that is to make sure that every worker has power, and the only way to do that is to ensure that every worker has the equal opportunity and effective means to become an owner of that organization.
Capital Ownership Within a Business Enterprise
To many people it seems as if expanded capital ownership is touted as a panacea as a result of all the problems it has the potential to solve.  That, however, is a misleading way to look at it.  Expanded capital ownership has the potential to solve so many problems because having ownership — and thus having power — is an inherent part of what it means to be human. 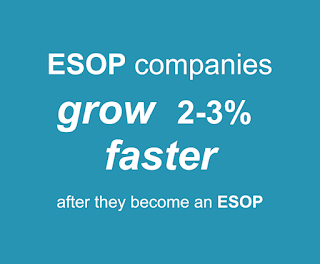 To deprive people of ownership (and thus power), or the means of acquiring and possessing capital, is to deny human nature.  And that causes more problems than anyone ever thought of solving by abolishing private property.  Nature is unforgiving, and always takes revenge.
True conflict resolution depends on people meeting together as “power equals” and getting matters settled, not only with fairness and justice, but with the perception that fairness and justice are the guiding principles.  And that is one reason why having worker-owners, instead of mere workers, is so important to build solidarity and get everyone pulling together in the same direction.
It is, after all, an ancient dictum that “Power naturally and necessarily follows property.”  In order to have the power to change the institutions of your organization or institution, or to resolve conflicts between individuals in a just and fair manner, you must have the power to do so and the right that comes only from ownership.
That is why any system that conforms to the principles of the Just Third Way must include capital ownership as an integral part of that system.  When a society or institution has both people with power, and people without power, there is going to be conflict.  Everyone in an organization must have power.
No leader or manager can truly resolve conflict simply by imposing desired conditions from above or silencing dissent by fiat.  That only whitewashes a problem and lays the groundwork for bigger problems in the future, whether institutional or personal.
True conflict resolution depends on people of equal status, and that means everyone has an equal opportunity and access to the means to become capital owners.  They can then organize to study and correct the problems that are causing the conflict at both the individual and the institutional level.
#30#
Posted by Michael D. Greaney at 10:00 AM