The stock market this week has exhibited its usual complete disconnection from reality.  This is a shame on several levels.  First, of course, it leads people to think that something significant is happening when the secondary market really has no direct effect on the primary market.  That’s why it’s called a “secondary market.”  It’s like expecting to examine the performance of used clothing stores to determine how well new clothing is doing.  Yes, there is some correlation, but used clothing sales don’t drive the retail clothing market.  Second, it diverts from the real purpose of the secondary market: to buy and sell “used” debt and equity.  This is a valuable service, but the experts act as if it doesn’t even exist.  Anyway, to get away from the fantasies of Wall Street, we advocate the Economic Democracy Act: 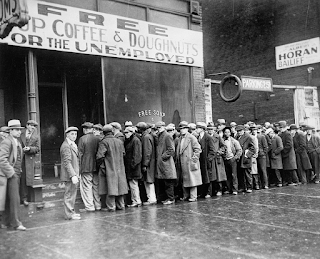 • WHAT “Recovery”?  The headline of an article in today’s Washington Post reads, “New Jobless Claims Increase to 898,000 In a Sign Recovery Could Be Stalling” (10/16/20, A-18).  The first thing that pops into our heads is, “What is this ‘recovery’ to which they refer?”  An economy to be just must function for the benefit of everyone, and that means that every participant in economic life — and all of us are that, given that economics refers to the production, consumption, and transfer of wealth — must be able to 1) produce, 2) consume, and 3) transfer (exchange) wealth.  When you have almost a million NEW “jobless claims” in an economy in which there are 7.2 million “officially” unemployed according to the Bureau of Labor Statistics (and 12.6 million when unofficial figures are added in), serious questions can be raised as to just how the powers-that-be define “recovery.”  If only a few people are growing richer while the rest at best lose ground slowly, something needs to be done to ensure that everyone have the opportunity and access to the means of becoming productive.  We suggest rather strongly that the Economic Democracy Act (formerly known as the Capital Homestead Act) be implemented at the earliest possible date.

• Worker Ownership for a Sustainable Economy.  According to the National Center for Employee Ownership (NCEO), the American Sustainable Business Council is promoting worker ownership as a solid foundation for building sustainable businesses, which translates into a sustainable economy that works for far more people than just the rich.  This doesn’t answer the question of what to do to make non-corporate workers (and non-workers) productive — see the Economic Democracy Act for that — but it certainly points in the right direction, and it is far more effective than printing funny money to “stimulate the economy.”

• Employee Ownership Month.  As we may have mentioned previously, October is “Employee Ownership Month.”  Since it is for the entire month, it bears repeating.  Of course, we shouldn’t stop there.  In September we have Labor Day, which celebrates wage workers for a day.  We kind of skip sennights and fortnights (that’s “weeks” and “two weeks” for those of you less archaically inclined), and go to a month for worker-owners.  It would seem that the next logical step would be to pass the Economic Democracy Act and make every year “Capital Ownership for All” so that everyone is included.  In fact, we’d like to see capital ownership so common that it’s nothing worth celebrating because it’s the usual thing.  What we can look forward to is a “Help the Unfortunate Non-Owners Minute,” since with as many people as possible capital owners, the hardest thing for those who are charitably inclined will be finding enough people to help! 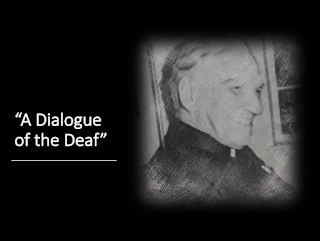 • Sensus Fidelium Videos, Update.  We now have a total of fifteen videos of a projected sixteen we’ve been doing with the “Sensus Fidelium” YouTube channel.  The new one this past week is “A Dialogue of the Deaf.”  For “interfaith” presentations to a Catholic audience they are proving to be popular, with more than 46,000 views to date.  They aren’t really “Just Third Way videos,” but they do incorporate a Just Third Way perspective.  You can access the playlist for the entire series by clicking on the link: “Socialism, Modernism, and the New Age.”  The point of the videos is to explain how socialism and socialist assumptions got such a stranglehold on the understanding of the role of the State and thus the interpretation of Catholic social teaching, and even the way non-Catholics and even non-Christians understand the roles of Church, State, and Family, and the human person’s place in society.

• Blog Readership.  We have had visitors from 43 different countries and 45 states and provinces in the United States and Canada to this blog over the past week. Most visitors are from the United States, Argentina, Canada, the United Kingdom, and India.  The most popular postings this past week in descending order were “JTW Podcast: The Passion of G.K. Chesterton,” “A Question About Fratelli Tutti,” “News from the Network, Vol. 13, No. 41,” “Pope Francis and Fratelli Tutti,” and “Can a Natural Right Be ‘Secondary’?”