As we saw in the previous posting on this subject, Prince Otto von Bismarck had imposed on indemnity on France following the Franco-Prussian War that he intended to break France economically, thereby removing any competition to the new German Second Reich from the French Second Empire.  Unfortunately, believing that specie — gold and silver — were “real money,” the German Chancellor outsmarted himself.

Consequently, Bismarck — in common with today’s academic economists and policymakers — seems to have believed that draining so much financial capital out of France would permanently cripple French industry and economic development.

This was a serious mistake. The world price of silver was dropping rapidly at this time. Not only was production booming, the British had finally given up trying to finance the economic development of India by massive purchases of silver, sometimes more than annual world production. World markets were glutted with a virtual tsunami of silver. This made it much easier for France to purchase silver on the world market cheaply — and ship it to Germany after minting it into Five Franc pieces at the agreed-upon standard.

Unfortunately for the Reich, the massive influx of silver undermined the stability of the German states’ currencies, most of which were based on silver, as they had been for nearly 2,000 years. When Bismarck put through the monetary reform for the new Reich, he found himself forced on to the gold standard, or he would have had to deal with serious inflation as the price of silver plunged. In real terms, the indemnity France paid may have been as low as two-thirds to a half of its nominal value, or even lower.

Spain had suffered from the same problem with the vast amounts of gold and silver shipped in from the New World and spent instead of being used to finance economic development.  As a result, Spain had 400% inflation and widespread poverty instead of any real benefit from their global empire.

The key to understanding Bismarck’s (and Spain’s) mistake is that he clearly didn’t realize that existing accumulations of savings are not generally used to finance capital formation directly. Instead, savings (which necessarily equals investment) most commonly serve as collateral for the extension of bank credit. Just as good as collateral — even better, actually — is a market where people are (in effect) standing in line to purchase everything you can produce.

The fact is you do not need existing assets — savings — in order to borrow from a bank. All you need is a solid contract with someone ready, willing, and eager to buy your good or service. With the high demand for French products at this time, especially wine, wool, and silk, the French had all they needed to generate sufficient cash to pay the indemnity without liquidating existing investment or inhibiting future economic growth.

Ironically, the Iron Chancellor may have done France a favor by imposing the indemnity. The French economy was in ruins as a result of the war. By creating an incentive to rebuild the French economy as fast as possible, Bismarck laid the foundation for what many people still today believe to have been the highpoint of French culture and civilization. He didn’t get any thanks for it (nor did he deserve any), but Bismarck was unable to prevent the good that resulted from his evil. 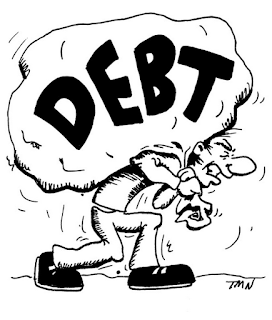 Modern politicians as well as academic economists and policymakers can learn a great deal from France’s experiences — both good and bad. Most obvious, of course, is for them to realize that the State cannot simply continue to create money for government spending, to bailout failed companies, or increase consumer spending (and thus government and consumer debt). Instead, the only safe and sound method of money creation is to back all new money with a private property claim on the present value of existing and future marketable goods and services, not government debt backed by possibly ephemeral tax collections.

Perhaps a more valuable lesson to learn, however (due to its immediacy), is that you cannot get out of a hole by digging it deeper. France did not pay off the Prussian indemnity by printing money and increasing the national debt — inflating and depreciating itself out of the hole it was in. In all likelihood, that would simply have caused another war with Germany when the Second Reich attempted to collect on the depreciated paper.

Instead, the French began to produce marketable goods and services at a tremendous rate in order to generate income with which to pay off the indemnity. They did not redistribute an existing pool of wealth through deflation and devaluation. In this, emulating Borden’s pre-emulation of Pasteur, they took the advice of Harold Moulton more than half a century before he gave it:

Production and employment are basic and ultimate points of reference in modern industrial life. Depression, like prosperity, is a phenomenon which is significant primarily in these terms, and no understanding of the factors of recovery may be gained without a thorough consideration of these two elements of economic activity.

From that perspective, today’s economic crisis is actually an opportunity. If our politicians and policymakers continue on their present path, of course, the situation will only get worse. If, however, they stop throwing good money after bad and start fostering production instead of speculation and gambling and relying on redistribution of existing wealth to meet people’s needs, we can expect to see a phenomenal turnaround in the world’s economy. The only question is, what program would be most effective in fostering production, stabilizing the currency, and increasing and sustaining consumer demand?

That is what we will look at when we post on this subject again.