In a recent article in Catholic World Report (“Why We Are Where We Are“), George Weigel opines that the increasing chaos we see around us these days is the result of the United States having lost its way after being cut loose from the liberal principles of its founding.  There is a good deal of merit in Weigel’s argument, but it doesn’t really explain how the U.S. lost its anchor.  As he says in this edited-for-length extract (since you can read the entire article by clicking on the link; it’s not long):

We got here, in part, because Americans have paid insufficient attention to Ernst-Wolfgang Böckenförde. He diagnosed a primary cause of our current distress over half a century ago: “The liberal secularized state lives on conditions that it cannot guarantee itself.” The liberal institutions of a modern democracy rely for their credibility, and their tensile strength under pressure, on cultural foundations those liberal institutions cannot, by themselves, create or defend.  Thus American democracy is not, and can never be, a machine that runs by itself.  The cultural and moral lubricants of the machinery — indeed, the very rationale for this kind of machinery rather than some other kind — must come from somewhere else.

For over two centuries in the United States, that “somewhere else” was a public moral culture formed by biblical religion and natural law philosophy.  Biblical religion taught Americans the built-in dignity and value of every human person as a person, irrespective of condition.  The philosophy of the natural law taught Americans that there are moral truths inscribed in the world and in us, that we can know those truths by reason, and that knowing them teaches us our duties. These cultural norms underwriting American democracy were sometimes forgotten or ignored. But they were there, and people of character could appeal to them to reform the Republic and help it realize its promise of freedom in solidarity for all Americans.

The constitutional scholar and University of Chicago law professor William Winslow Crosskey (1894-1968) had a somewhat different take on the problem in his book, Politics and the Constitution in the History of the United States (Chicago, Illinois: University of Chicago Press, 1953).  Briefly (according to Crosskey), in an effort to preserve and extend slavery, the U.S. Supreme Court expanded the concept of judicial review in the Constitution far beyond the bounds of what the framers intended, by this means permitting “legislation by judiciary” and the usurpation of the role of Congress by the Court and the Executive.

The issue came to a head with Scott v. Sandford 60 U.S. 393 (1857), the notorious Dred Scott case.  In his opinion, Chief Justice Roger Brooke Taney conflated citizenship conferred by a state, with personality conferred by God by means of the natural rights inherent in every human being.  Dred Scott therefore was not a person, and could not, therefore, be a citizen, and had no standing in the court.  He was a “thing,” not a “person.”

Taney — ironically a Catholic who violated Catholic teaching in rendering his opinion — thereby shifted sovereignty from the human person created by God, to the abstraction of the State created by man.  Interestingly, Fulton Sheen addressed something similar as a philosophical problem in his 1925 doctoral thesis, God and Intelligence in Modern Philosophy, which was published with an introduction by G.K. Chesterton.

Not by coincidence, Taney had earlier been Secretary of the Treasury under Andrew Jackson, attaining the office after Jackson “fired” a number of predecessors for refusing to shut down the Second Bank of the United States.  Taney accepted the appointment on the understanding that he would do whatever Jackson wanted.

Taney continued his philosophy of “might makes right” as Chief Justice by handing down a decision that gave powerful slave-owning interests in the South precisely what they wanted: an official federal government and legal acknowledgement of slavery as a national institution (instead of mere recognition as an affair of the individual states*), and the ability to extend slavery anywhere in the United States after overturning the Missouri Compromise (which the opinion in Scott did).

*  This was supremely ironic, as the constitutional ramifications of the Dred Scott opinion were that the slavery issue was no longer a matter of “state’s rights,” but a constitutional question affecting the entire country.  By taking the issue of slavery out of the hands of the individual states, slavery became de facto legal everywhere in the United States — which was what pro-slavery forces wanted.  It backfired on them with the election of Abraham Lincoln.  Despite Lincoln’s assurance that he would not abolish slavery (based on his “pre-Scott” understanding of the Constitution and the role of the Executive that left the slavery issue to be decided by the individual states), Southern leaders were aware that they could not have their cake and eat it, too.  Having demanded — and gotten — official recognition by the Supreme Court of slavery as a federal issue, they could not very well take refuge in “state’s rights” if abolitionist forces demanded — and got — the federal government to abolish slavery.  Having placed themselves in an untenable position (slavery a federal issue when it suited them, but a state issue when it did not), they were forced — as they saw it — to secede from the Union in order to take back the “state’s rights” to preserve slavery they had surrendered to the federal government in order to extend slavery.  Secession also changed Lincoln’s position on whether the federal government had the power to abolish slavery.  By seceding from the Union on the grounds of “state’s rights,” the Confederacy acknowledged that they had made slavery a federal issue, and thus could be abolished by the federal government as well as extended, but had changed their minds (effectively) and now wanted it back as a state issue in order to preserve slavery. 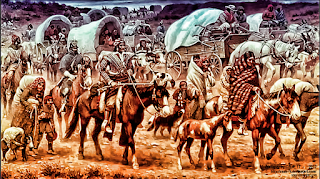 Interestingly, Lincoln’s view of slavery as a state issue was similar to Andrew Jackson’s view of the ability of the individual states to remove the Cherokee from their lands in the East.  Jackson protested, and sent federal troops to protect the Cherokee during the removal, but believed that the federal government had no power to forbid or prevent the removal as it was a matter for the individual states.  It is possible that the “Specie Circular” promulgated by Jackson that in part forbade the sale of government-owned land on credit was to prevent as far as possible the land speculators from profiting from the seizure of the lands of the Cherokee.  It failed, and triggered “Hard Times,” the Depression of the late 1830s and early 1840s.

Under the precedent established by the opinion in Scott, someone could be a human being but not a person.  This, however, would have been an impossibility under the natural law theory embodied in the Declaration of Independence and the U.S. Constitution.  (See The Political Philosophy of Saint Robert Bellarmine, 1926, by Rev. John Clement Rager.)

Following the Civil War, the 14th Amended was adopted in part to overturn Scott, but was effectively nullified by the U.S. Supreme Court in its opinion in the Slaughterhouse Cases 83 U.S. (16 Wall.) 36 (1873).

As Crosskey maintained, the opinion in Slaughterhouse was so vaguely and “craftily” written that it effectively granted the Supreme Court near-absolute power.  As he said,

So, the Court’s opinion in the Slaughter-House Cases was, undoubtedly, most craftily written; written so as to enable the Court, with a good face, in future cases, to jump either way: to observe the intended meaning of the Privileges and Immunities Clause if that seemed unavoidable, or, in the alternative, to destroy the clause utterly if this seemed safe.  And the fact that this elaborate preparation was made also means that the majority Justices saw and fully comprehended the possibility of the intermediate, plain, and sensible meaning of the Privileges and Immunities Clause here expounded, to which, indeed, Justice Bradley called attention, in his dissenting opinion.  So, the majority must, as the minority charged, already have determined, if they dared, to destroy this new provision of the Constitution completely.” (Politics and the Constitution, p. 1130.)

Thus, in a bizarre and horrifying twist, in its opinion in the Slaughterhouse Cases the U.S. Supreme Court put all Americans in the same legal position that Scott v. Sandford imposed on Black Americans!  All human persons — not just Black slaves — were only persons if the Court decided that was the case.  Obviously, under this (re)interpretation of the U.S. Constitution, something like Roe v. Wade 410 U.S. 113 (1973) becomes a mere formality; “raw judicial power” becomes the order of the day because “might makes right.”

With the State sovereign instead of the human person, all it takes is governmental fiat by any branch of the government not merely to create law, but to change the definition of the natural law, and thus of human nature from which we derive our understanding of natural law.  The shift from lex ratio (law is reason) to lex voluntas (law is will) lays the foundation for the current chaos by enshrining “might makes right” as the fundamental precept of the natural law, instead of “good is to be done, evil avoided,” as the solidarist jurist and political scientist Heinrich A. Rommen explained in his book on the natural law:

For Duns Scotus morality depends on the will of God.  A thing is good not because it corresponds to the nature of God or, analogically, to the nature of man, but because God so wills.  Hence the lex naturalis could be other than it is even materially or as to content, because it has no intrinsic connection with God’s essence, which is self-conscious in His intellect.  For Scotus, therefore, the laws of the second table of the Decalogue were no longer unalterable. . . . an evolution set in which, in the doctrine of William of Occam on the natural moral law, would lead to pure moral positivism, indeed to nihilism. (Heinrich A. Rommen, The Natural Law: A Study in Legal and Social History and Philosophy.  Indianapolis, Indiana: Liberty Fund, Inc., 1998, 51-52.)

As a result of this confusion over human nature and the shift from the actuality of the individual human person to the abstraction of the collective, any group that can demonstrate enough power to force its will on others becomes, de facto, right and virtuous as objective standards of right and wrong are abolished.

Is there a solution to this?  Possibly — and that will be covered in the next posting on this subject.