A Way to Finance “Green” Infrastructure

As we saw in the previous posting on this subject, one way to “lure” people back to work when they are (at least temporarily) better off not working, is to make them an offer they can’t refuse, or at least would be extremely foolish to turn down.  The offer we suggested, of course, is that it would be beneficial to offer workers a piece of the action, that is, part ownership of the companies that employ them.

It would also be to everyone’s advantage if as much of the economy as possible were to be automated.  That is, if the workers displaced by the automated machinery owned enough of it to generate at least as much income from dividends as they would get from selling their labor.  That way, consumer demand (which drives the demand for new investment and thus greater production) would be kept up, and Say’s Law of Markets would be restored to full functioning.

Money now being given as “loans” that transform into non-repayable grants to businesses could be turned into actual capital acquisition loans — to be repaid in full once a company becomes productive again.  That way, instead of the money being used to pay workers for not working, it would be giving them a stake in the company’s future and a reason to make the company productive again as soon as possible.

That, however, still leaves out anyone who doesn’t work for a for-profit company, or who maybe doesn’t work at all, for whatever reason.

There are some people who say that there are no such things as difficulties, only opportunities.  We don’t know that we’d go that far, but there is a huge, er, opportunity awaiting the entire population of the United States (and quite a few other countries, as well, for that matter).

We’re talking about the decaying infrastructure problem.  A while back CESJ addressed this problem in “A Just Third Way to Finance Green Infrastructure,” and the situation has deteriorated even more in the interim:

America faces a conundrum: Everybody agrees that something needs to be done about our crumbling infrastructure, but nobody knows where the money will come from to finance it.

One thing is increasingly clear, federal tax dollars will provide at best a fraction of the trillions of dollars needed. As part of the federal budget, state and local public programs will be facing decreased federal assistance. Even if it were sufficient to cover all the costs, conventional private investment would concentrate the ownership and control of roads, bridges, sewage systems, and other basic infrastructure in Wall Street and a wealthy élite.

There is, however, a Just Third Way alternative to government ownership or oligopolistic ownership of America’s infrastructure, and its source of financing would come through competitive local banks with access to the discount windows of the twelve regional Federal Reserve Banks. 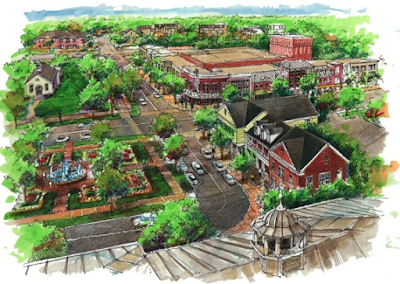 The CLDC is a key vehicle in a national private sector growth strategy known as “Capital Homesteading,” which recognizes the ownership of productive capital as a new right of citizenship and supplemental source of personal income.

The CLDC is designed to finance livable and inspiring “new communities” in which every worker and resident would be afforded the right and the effective means to participate personally in capital ownership accumulations, profits and local decision-making. It functions just as the Rouse Corporation did in building Columbia, Maryland or the Reston Corporation did in building Reston, Virginia — but with a difference. The CLDC turns community residents into its principal shareholders.

The CLDC offers a planning framework for financing local infrastructure and land development to increase land values and attract new worker-owned industries and entrepreneurial opportunities. It can also provide financing incentives for introducing and commercializing advanced technologies that can be owned by local workers, create new private sector jobs, and enhance the economic growth of the community within local, national and global markets.

Through CLDCs and the Capital Homesteading program, financing for planning, construction and operational phases of each green infrastructure operation would: 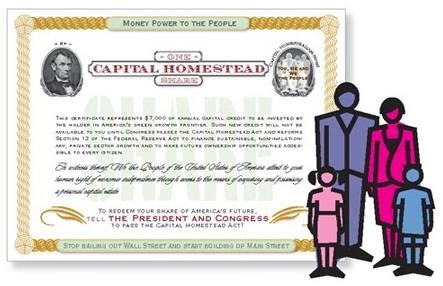 ·      Provide equal opportunity for every citizen to receive an equal annual allotment of capital credit for direct investment in infrastructure projects.

·      Enable citizens to purchase utility shares through local commercial and cooperative banks of infrastructure utilities of their choice throughout the country.

·      Enable citizen-owners to repay their stock purchase loans with the full stream of future pretax profits of the utility issuing those shares.

·      Allow for broad-based citizen-owner representation and participation in the planning process, determination of usage charges, and the profits over all utilities.

·      Structure the decentralization of power and accountability to citizens, reducing the possibility of corruption that occurs when management and ownership powers became monopolized by government bureaucrats and politicians.

Outlined in “The Citizens Land Development Cooperative: Linking People to Land and Technology through Ownership” is a national demonstration project for rebuilding and financing new infrastructure, linked with broad-based ownership participation in land development among area residents and workers. The CLDC strategy can be implemented at the local, state, regional or national level. Its financing would not depend on existing taxpayer dollars or the past savings of the rich, but on the use of interest-free credit and asset-backed money repaid with future profits to be generated by growing businesses and future user fees.