We just got a notice from a religious watchdog group that we usually ignore as it tends to go as far in favor of religion as anti-religious counterparts do against it.  This time, however, they might have had a point: a push by certain anti-religious groups during the Christmas Season to convince people that freedom of religion is the single greatest threat to freedom that exists seems to be a little over the top.


It reminds us of the demand for “choice” that doesn’t include choices with which advocates of “choice” happen to disagree.  What’s the answer?  How about the Just Third Way of Economic Personalism so that people have the economic power to secure their own freedom without worrying about presumed threats from others.  Of course, it’s amazing that when people have control over their own lives they seem to make choices and exercise freedoms that the self-appointed guardians of choice and freedom don’t like:
• Rand Paul on Student Loans. Rand Paul has come out with a proposal that people be allowed to pay off their student loans by taking money out of retirement savings without incurring the usual penalty for premature distributions.  This makes a little bit of sense in one way, for it hardly pays anyone to be saving on one hand while he or she has unpaid debts bearing interest that keep getting larger and larger — and that can’t ordinarily be discharged in a bankruptcy.  Since retirement savings are also ordinarily exempt in bankruptcies, it (sort of) makes sense to get rid of one obligation that is only going to get bigger and bigger with a more or less offsetting asset.  The problem is that as long as saving and investing for retirement is based on past savings and reducing current consumption income, it is slanted heavily in favor of early savers, whose tax-free earnings on the investments are reinvested.  Example: given a 10% average ROI on mutual funds in an IRA, and a $5,000 annual contribution, take twin brothers, one of which goes to work right after high school and the other goes to college and graduate school.  The first brother immediately opens an IRA in a conservative mutual fund and puts in $5,000 every year for ten years, then gets married and has children and finds he can’t afford to contribute any more.  The second brother starts contributing to his identical IRA at the same time his brother stops contributing to his.  Come retirement age and the time to start taking distributions, the brothers are astounded to discover that even though he has not contributed for decades, the first brother has more in his IRA than the second brother!  Why?  Because after ten years the first brother’s IRA was generating more in income that was reinvested than his brother was contributing each year!  Everything else being equal, it’s better to invest early than often.  Thus, taking money out of retirement investments to pay down debt can completely destroy a retirement plan.  The whole question would be moot, of course, under Capital Homesteading, as a Capital Homestead Account would generate income from the beginning that could be used to pay for education, or to make payments on student loans without touching the principal, leaving a retirement program intact.
• Fulton Sheen and the Scandal.  As many people are aware, Abp. Fulton J. Sheen, the author of Freedom Under God (1940) that CESJ has republished in a “Just Third Way Edition,” has had his “cause” for canonization in process for a while.  Canonization is an official declaration by the Catholic Church that an individual is — according to Catholic belief — in Heaven and may be officially termed a “saint.”  Canonization does not, contrary to popular belief, “make someone a saint.”  It simply recognizes what the Catholic Church believes to be true.  Sheen’s “cause” has been subject to a measure of religious politicking that need not concern us (except to note that having a recognized and popular saint buried (or “enshrined”) in your town or church can be quite financially rewarding.  We only bring this up because the Vatican announced last month that Sheen would be “beatified” — the next step to canonization — in December.  Naturally, a large number of people were outraged when at the request of some U.S. bishops the beatification was put on hold until a matter regarding Sheen’s role in the reassignment of a priest identified as a sexual pervert is settled.  It does not appear that Sheen did anything inappropriate or improper, especially since his tenure as Bishop of Rochester, New York, was too brief to do anything except upset a lot of people due to his lack of administrative experience (he all but admits in his autobiography he was not a good administrator), but since Sheen was named in an official investigation, it is clearly prudent that his beatification be held up until the matter is completely resolved.  Had Catholic authorities acted with equal prudence in other instances, finding out the truth before acting (or failing to act), much of the scandal currently shaking that institution could probably have been avoided. 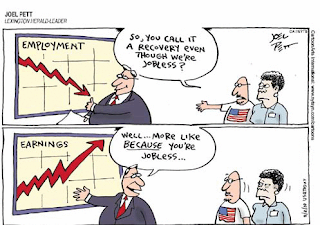 • Jobs Report and Finance.  What possible connection is there between how many people are employed in wage system jobs and the prices of shares on the stock market?  None — unless the only way most people gain their income is from wages and welfare.   The employment rate then becomes a “leading economic indicator,” for if people have “jobs,” they will have income, and with income will have consumption power.  Since consumer demand drives the demand for new capital, then a “good” jobs report within the past savings paradigm that restricts most people to wages and welfare means that the economy should do well.  Of course, if new capital were financed out of future savings in ways that create new owners instead of increasing the wealth of current owners, and most people got increases in income from dividends of ownership instead of wages for labor, the Jobs Report would be pretty much meaningless.  What would matter would be the “Ownership Report” that gave a breakdown of capital ownership patterns, how many people had a level of capital ownership sufficient to meet consumption needs and how many still had to rely on wages and welfare, and so on.  With income going to consumption instead of reinvestment, an Ownership Report would be a much more solid leading economic indicator than a jobs report could ever be. 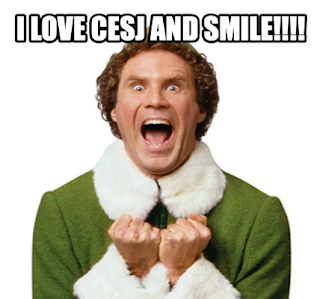 • Shop online and support CESJ’s work! Did you know that by making your purchases through the Amazon Smile program, Amazon will make a contribution to CESJ? Here’s how: First, go to https://smile.amazon.com/.  Next, sign in to your Amazon account.  (If you don’t have an account with Amazon, you can create one by clicking on the tiny little link below the “Sign in using our secure server” button.)  Once you have signed into your account, you need to select CESJ as your charity — and you have to be careful to do it exactly this way: in the space provided for “Or select your own charitable organization” type “Center for Economic and Social Justice Arlington.”  If you type anything else, you will either get no results or more than you want to sift through.  Once you’ve typed (or copied and pasted) “Center for Economic and Social Justice Arlington” into the space provided, hit “Select” — and you will be taken to the Amazon shopping site, all ready to go.
• Blog Readership.  We have had visitors from 17 different countries and 33 states and provinces in the United States and Canada to this blog over the past week. Most visitors are from the United States, India, Spain, Canada, and the Philippines.  The most popular postings this past week in descending order were “Are Computers Taking Over?” “Capital Homesteading and Social Security,” “JTW Vlogcast: Why We Need Justice University (and Capital Homesteading),” “College Versus Childcare,” and “Thomas Hobbes on Private Property.”
Those are the happenings for this week, at least those that we know about.  If you have an accomplishment that you think should be listed, send us a note about it at mgreaney [at] cesj [dot] org, and we’ll see that it gets into the next “issue.”  Due to imprudent language on the part of some commentators, we removed temptation and disabled comments.
#30#
Posted by Michael D. Greaney at 6:00 AM