A Tale of Two Machines, I: The Cotton Gin

Many people are aware that advancing technology has an effect on society and individual behavior.  From the displacement of human labor from the production process to video game or social media addiction, technology often seems to benefit only a relatively small number of people at the expense of everyone else.


This is not really the fault of advancing technology, but of ownership patterns and the financing of new capital.  To illustrate, let us take the example of two inventions that changed the economic and political face of America, the cotton gin and the McCormick reaper.  Today we will look at the cotton gin.
Although it seems counter intuitive, chattel slavery was beginning to look like a dying institution in late eighteenth century America.  The framers of the U.S. Constitution were even able to get a sunset date for the importation of new slaves inserted into the document, with the obvious intent of following the growing anti-slavery sentiment and gradually abolishing the institution.
Then came Eli Whitney’s invention of the cotton gin in 1793.  Whitney began to work on his project after moving to Georgia in search of work.  Farmers were desperately searching for a way to make cotton pay, so a woman named Catharine Green financed Whitney’s invention. Whitney created two types: a small, hand-cranked version and a large one that use horse- or water-power.
Prior to Whitney’s invention, cotton had required considerable labor to clean and separate the fibers from the seeds, taking a slave an average of ten hours to clean a single pound.  The first version of the cotton gin operated by two slaves could clean fifty pounds a day, a 2,500% increase in processing capacity that eliminated the bottleneck to supplying the world with inexpensive fiber. 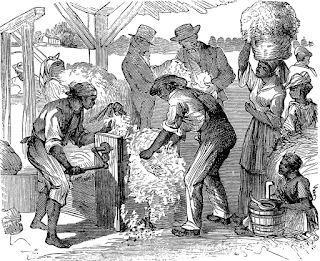