A think tank that shall remain nameless recently presented a study, the point of which was that free childcare is more important than free college.  At first glance this seems like heresy.  For around half a century at least, the constant mantra in the United States was to study hard, get into a good college and you’ll get a good job.  That is, assuming that there are any jobs to get, but that’s another issue. . . .


As many people have been complaining, colleges today seem to be oriented by and large to train people for jobs that either don’t exist, or of which there are not enough of (to torture syntax a trifle).  The usual solution is to call for more job training so that college students can find jobs in their area of study. 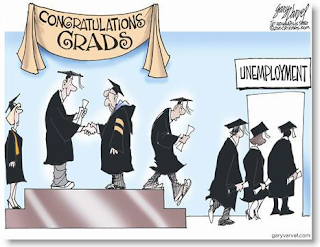 The problem is that most job training is geared toward blue collar- and those “service sector” type jobs that typically do not require a college degree.  A joke that makes the rounds every Spring, therefore (although it’s not much of one), is “What do you call a [fill in the blank] major?”  Answer: “Unemployed.”
Now add in the fact that when the government (or, if you prefer, “gummint” as one lady of our acquaintance insists on as her chosen pejorative) speaks of “job creation” or the “jobs market” (again, some rather interesting concepts there. . . .), it usually refers to blue collar- and many “service sector” type jobs, as those constitute the largest number of jobs in the United States.
Interestingly, there are now more government workers (15%) than blue collar workers (13.9%).  As government produces nothing, and “service sector” workers (71.1%) are not engaged in direct production, according to conventional economics and government policy, 13.9% of the U.S. workforce is responsible for not merely the bulk, but the totality of U.S. production of marketable goods and services. 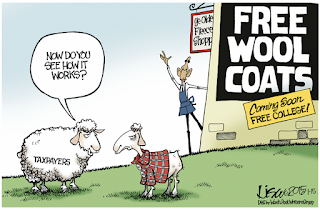 Of course, you could admit that more than human labor is productive.  This contradicts the assumptions of Keynesian economics and the Department of Labor statistics that analyze all production on the basis of labor hours, but you are an Independent Thinker.  You are no more puzzled by that statistic than by the fact that capital is independently productive (which can be either autonomously or interdependently, depending on how far your technology has advanced), and the obvious solution to all of this becomes, well, obvious, as we note below.
Thus, it makes perfect sense that a think tank would come out and say that free childcare (well . . . free for the user, if not free for whoever ends up paying for it . . . sort of like free college) is more important than free college (which, by the way, usually means “free” tuition . . . which also means all other fees are jacked up to make up for the lack of tuition fees. . . .). 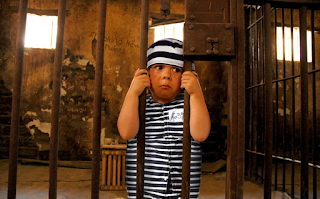 The reasoning is quite simple.  Free college is important if you think that you need a college degree in order to get a job.  The problem these days, however, is that there is no guarantee that any jobs will be available once you have that degree.
So how is free childcare better?  You might need a college degree to get a job that might not exist . . . but when you actually have a job and have children, those children have to be taken care of if both spouses (assuming they are spousified) work.
Unfortunately, since childcare is traditionally “women’s work,” and most children in childcare were born of women one way or another, the cost of childcare is generally weighed against the income the woman in question generates by having a job outside the home.  This can get pricey, as all the costs of work clothing, transportation, lunches (if you really want to look weird these days, brown bag or lunchbox it to work*), and all the et ceterae that go along with holding down an outside- and an inside-the-home job start to add up.
*  Unless you’re in Japan or dwell within a Japanese cultural sphere.  Then it’s cool to bring a bento prepared by your spouse.  This is a Big Thing in the Land of the Rising Sun.  No one ever seems to prepare a bento — a lunch in a box — for him- or herself, but will spend hours preparing elaborate lunches for someone else, as this video shows. 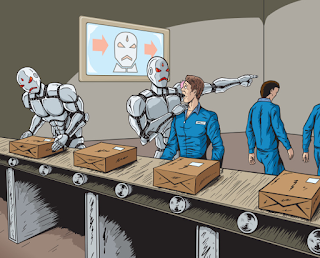 The problem, of course, is that free childcare — like “free” college — (aside from not being free, as we said, for whoever ends up paying for it) completely avoids the entire problem!  Both the need for childcare and for college as some kind of essential career adjunct miss the point.  WHY do people need jobs in the first place?
For the income, of course.  It is generally assumed in our society that unless people are forced to work, they won’t bother.  This necessarily comes into conflict with another generally acknowledged assumption in our society that people should get what they need, in spite of their contribution to business, society, or anything else.
The problem is much deeper than that, however.  What both the needists and the workists are missing is that as technology advances, human labor is being removed at an accelerating rate from both direct and indirect production.  For example, where once you needed one highly trained cobbler to turn out a couple of pairs of shoes a day, nowadays you need one passably trained machine operator to turn out hundreds, if not thousands of pairs of shoes per day. 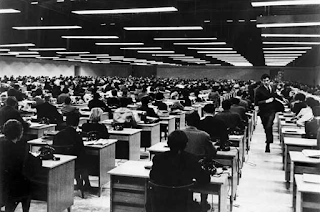 And the same goes for indirect production.  Where before you needed hundreds of stenographers and typists to keep an office running, nowadays a single laptop has replaced the entire “Steno Pool” and almost all typists.  It’s just easier for many executives to type their own letters into a computer word processing program than dictate to a stenographer-typist who, regardless how fast he or she is, isn’t more efficient carrying out multiple tasks than a computer just doing one.
How can this problem be solved?  The first step is to define it.  It’s not a question of not enough jobs, but of a decreasing importance of human labor, whether direct or indirect, in the production of marketable goods and services.
Obviously, it is ludicrous to assume that 13.9% of the workforce is responsible for 100% of direct production.  That leads the objective thinker to examine the situation and conclude that technology — the only thing in the equation that is changing — is responsible for the bulk of production.
At that point a reasonable conclusion is that technology must be what is responsible for producing most goods and services.
Which means? 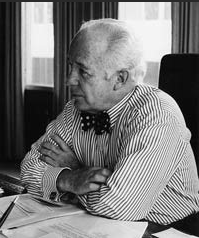 As Louis Kelso noted more than half a century ago, “If the machine wants our job, let’s buy it” (meaning the machine, of course).  If machines (capital) are responsible for most of the production of marketable goods and services, doesn’t it make sense that anyone who consumes must also be a producer by means of machinery?
That being the case, then anyone who wants to consume must also own the means of production, whether that is labor or capital.
And that means?
As human labor becomes increasingly redundant in production, human beings must become owners of capital.  How?  By getting behind the push for a “Capital Homestead Act” so that ordinary people without savings can purchase self-liquidating assets on the same terms as the already-wealthy, that’s how.
Then, if you want to go to college you could afford it without worrying whether or not it is “free.”  You could also afford to take care of children — or even have them! — yourself without the necessity of dumping them on others to raise for you.
#30#
Posted by Michael D. Greaney at 6:00 AM