An Unimportant Shift in Meaning


While the idea that people should be able to have what they need as a basic right sounds good, there is a very subtle and extremely evil implication built into that assumption.  We can see this best by comparing it with the traditional assumption that people have the right to the means to acquire what they need.
Obviously, the right to the means to acquire what you need necessarily implies that you qualify or are able to use the means correctly to attain the desired goal.
For example, someone who wants a loan to acquire a farm is expected to be “creditworthy,” that is, someone with “good credit” who keeps his word, will spend the money for the purpose for which it was intended, and will repay the loan out of the future profits of the farm once it becomes productive.  If, instead, the borrower wants a loan to go to Vegas, will buy luxury goods for his immediate pleasure, or doesn’t pay his debts, he would not qualify for a loan, and thus does not meet the requirements to exercise his right to the means of acquiring what he needs.  He must either make himself creditworthy to be able to exercise his right, or he must find someone willing to give him charity.
Similarly, a right to work implies that you are competent to fulfill the job requirements for the task which you have been hired to carry out.  A bricklayer is expected to be able to lay bricks.  A truck driver is expected to drive trucks.  A ditch digger is expected to dig ditches, and so on.
Now consider the idea that people have the right to have what they need.  As noted, this sounds very well, but there are a number of “catches,” the first of which is, Who decides what someone needs?  Food, clothing, and shelter seem obvious, but even those raise questions of how much and what kind?
Someone living in a grass hut in the Amazon is unlikely to want or need a fur coat, while a native of Nome, Alaska might not have a strong desire for a string bikini.  Jews and Muslims would find no use for a bacon cheeseburger, while an inhabitant of one of the hip districts of the City of Angels might demand tofu turkey in his taco. 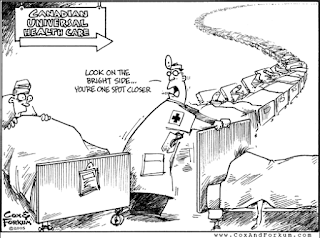 These are obvious problems when dealing with distribution on the basis of need, but there is a far more dangerous implication.  Someone else is going to make the determination what you need, and that means someone else decides whether you need 100 or 5,000 calories per day, or whether that heart operation is warranted in your case.
Waiting lists for operations or even doctors’ appointments in countries with socialized medicine are (not to exaggerate) frightening.  A standard joke about hospitals in the former Soviet bloc was that people are dying to get in.  According to anecdotal evidence we’ve received, the Canadian healthcare system is only bearable because the U.S. system is available as a backup for those who can’t wait years and who are fortunate enough to have the means to pay for what they need across the border.
Not by coincidence, when it comes to allocation of scarce resources (and remember, in economic terms everything is scarce), unpopular people, those with the wrong politics, religious views, opinions, and so on, and so forth, tend to find themselves at the end of the line, and finally pushed out of the queue completely, if not “liquidated.”  Think of the trendy nightclubs where a bouncer stands at the door deciding who is “cool” enough to enter a business legally obligated not to exclude anyone who otherwise meets the requirements for entry (not drunk, is properly dressed).
As Msgr. Ronald Knox noted in his study of what he called “enthusiasm” (which he defined as an excess of charity that threatens unity), to the enthusiast, such as those demanding distribution on the basis of need, the ungodly (or the uncool, the ugly, the smelly, those who talk funny, are smarter or dumber than you, etc., etc., etc.) have no rights.  They are less than human, and you can do anything to them you like.
And who are “the ungodly”?  Why, anyone with whom the enthusiast disagrees, i.e., unpopular people, those with the wrong politics, religious views, opinions, and so on, and so forth.  These are the ones whom the enthusiast turns into “monsters” to be eliminated from society, if only because they consume what should go by right to those regarded as fully human.  They are the useless eaters who endanger society (and your comfort, status, or anything else) by their very existence.
Thus, as we saw in the previous posting on the subject, “National Socialism’s inherently contradictory social and political message . . . was only possible through the widespread inculcation of a supernatural, quasi-mythical vision of the world that accused Jews, communists, freemasons, foreigners and any other scapegoats of monstrous powers and intentions.” (Kurlander, “Hitler’s Monsters,” op. cit., 540.)
The question now becomes how specifically this state of affairs came to be, which we will take up in the next posting on this subject.
#30#
Posted by Michael D. Greaney at 6:00 AM