It’s amazing the stories people will tell when they have no idea what they are talking about.  For example, for years we’ve been hearing that the goal of the Just Third Way is to abolish wages (which are presumably absolutely secure) and force all workers to live on profit sharing alone.


This, of course, is nonsense, as anyone with a grain of common sense would be able to see in an instant.  The goal of the Just Third Way is not the abolition of the wage, but the abolition of the wage system.  The wage is just compensation for labor.  The wage system is when most people gain all their income solely from wages, almost inevitably resulting in injustice, either to the wage earner or the wage payer.
By turning workers (and, ultimately, everyone) in owners of capital, compensation can consist of the market-determined price of labor without regard to what the seller of labor needs to survive.  By taking any increases out of profits due them as owners instead of increasing wages and benefits, worker-owners keep prices low (which benefits them primarily), creates instead of destroys jobs, and increases consumption power without increasing costs.  As the labor-statesman Walter Reuther said in his testimony before Congress,
The breakdown in collective bargaining in recent years is due to the difficulty of labor and management trying to equate the relative equity of the worker and the stockholder and the consumer in advance of the facts….  If the workers get too much, then the argument is that that triggers inflationary pressures, and the counter argument is that if they don’t get their equity, then we have a recession because of inadequate purchasing power. We believe this approach (progress sharing) is a rational approach because you cooperate in creating the abundance that makes the progress possible, and then you share that progress after the fact, and not before the fact.  Profit sharing would resolve the conflict between management apprehensions and worker expectations on the basis of solid economic facts as they materialize rather than on the basis of speculation as to what the future might hold…. If the workers had definite assurance of equitable shares in the profits of the corporations that employ them, they would see less need to seek an equitable balance between their gains and soaring profits through augmented increases in basic wage rates. This would be a desirable result from the standpoint of stabilization policy because profit sharing does not increase costs. Since profits are a residual, after all costs have been met, and since their size is not determinable until after customers have paid the prices charged for the firm’s products, profit sharing as such cannot be said to have any inflationary impact upon costs and prices…. Profit sharing in the form of stock distributions to workers would help to democratize the ownership of America’s vast corporate wealth.  [Testimony before the Joint Economic Committee of Congress, February 20, 1967.] 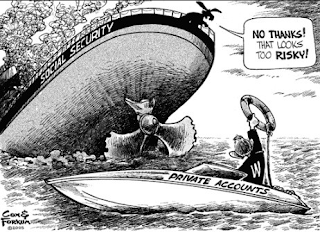 Our subject today, however, is not to counter the bizarre accusation that CESJ is out to abolish wages, but to deal with the equally false idea that we advocate “privatizing” the Social Security system.  As it becomes increasingly obvious that Social Security cannot provide anything more than an often inadequate subsistence on retirement — nor was it ever intended to do anything else — and that efforts to increase the entitlement and fund the increases range from the ridiculous to the even more ridiculous, it becomes just as obvious that Something Must Be Done.
One of the most frequent demands is that the entire Social Security system be “privatized,” that is, the money paid in by participants is used to purchase private sector securities instead of government bonds.  This will ensure a presumably greater return on the participants’ “investment.”
The problem, of course, is that participants don’t own the money they paid into “their” accounts.  It’s a tax, not a contribution to a retirement plan.  It’s plain old redistribution and was never intended to be anything else.  Even the United States Supreme Court agrees.  In 1960 in a landmark case, Fleming v. Nestor, the Court ruled that participants do NOT own what they pay in, and Congress clearly reserved the right to adjust benefits at any time, up or down.
That’s right.  To the best of our knowledge Congress has never actually decreased benefits, only increased them, but it has the authority to decrease them at any time for any reasonable cause without having to satisfy the “takings” clause of the Fifth Amendment.  The “takings” clause requires that OWNERS be justly compensated when the government takes what they own for public use.
The kicker is that not only do participants not own anything in their Social Security accounts . . . there actually isn’t anything in them to own!  No, the money that is collected is either paid out or borrowed and replaced with government bonds. 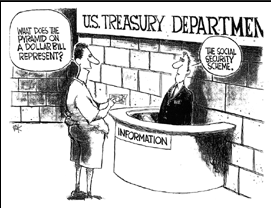 Since the Social Security Administration is part of the government, that means that all the so-called investments in government bonds in the Trust Fund consist of money that the government borrowed from itself and must make good either out of future tax collections or new issues of debt that must be made good out of future tax collections.  In other words, for every dollar that the government pays out of the Social Security Trust Fund, it must collect two dollars in taxes and whatever it costs to administer the fund!
That’s hardly an investment in the traditional sense.  It’s a Ponzi scheme in which the people who got in on the ground floor are paid out of what is collected from people who came in later.
That’s if you regard Social Security as some kind of investment.  It’s not, and was never intended to be.  As an investment it’s a fraud.  As a welfare program, it’s essential, especially at this stage of the game . . . but it is unsustainable if it continues as it is going.
So what is it that we do propose instead of replacing Social Security with Capital Homestead Accounts?
Reform.  That’s right, we’re in favor of Social Security reform, not replacement or abolition. 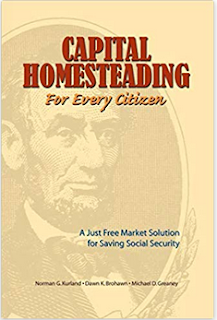 The larger program is outlined in Capital Homesteading for Every Citizen (2004), but we can summarize it here.  The first thing is to reassure people that all the promises made will be kept, at least in essence.  To achieve this,
·      Merge the FICA tax into the general tax rate and abolish the Trust Fund.  The concept of owing money to one’s self is financial sleight-of-hand and only gives the illusion of wealth.
·      Make receipt of future benefits need-based.  It was originally intended to be a welfare program, and there is no reason why people who don’t need welfare should receive it while others who receive an inadequate amount should get more.  This, however, is only possible if the program is based on the need of the recipient, not the amount paid in by the participant.
·      Immediately implement a “Capital Homesteading” program that has the potential to turn every child, woman, and man into an owner of capital on borrowed money with non-recourse loans repaid with the future dividends and collateralized with capital credit insurance.
(Yes, given the current understanding of dividends, private property, money, and credit, this makes no sense — which is why we say reform in all those areas are needed, and as we have addressed the issue in previous blog postings.  This is just a summary today, not the whole program.)
That’s it.  We are talking a system completely separate from Social Security, not privatizing Social Security — or abolishing wages.  If you have issues with any of this, visit the CESJ website before going ballistic.
#30#
Posted by Michael D. Greaney at 6:00 AM