This is the time of year when people give each other the Dickens in the numberless readings and dramatic adaptations of A Christmas Carol, that is, as well as all the parodies, spoofs, rip-offs, and cartoons.  A personal favorite among the later comes from the old New Yorker/Saturday Review of Literature cartoon series by the late Burr Shafer (1899-1965), “Through History With J. Wesley Smith,” known as “History’s Greatest Wrong-Guesser.”


The cartoon showed Smith in a nineteenth century London club glowering while informing another member, “It’s new story by that Dickens fellow — about a worthy banker named Scrooge who finally degenerates into a sentimental weakling.”  Harry Truman once remarked he was pleased that he was smart enough to understand Shafer’s points in his humor. 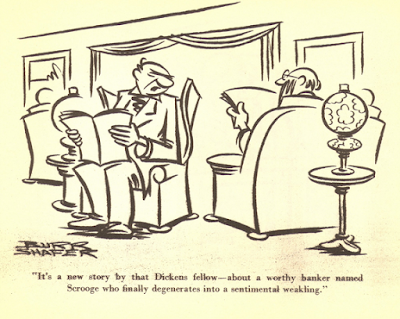