With so many members of the CESJ core group in town who knew and worked with Don Alberto Martén Chavarría, founder of the solidarity movement in Costa Rica, we thought we’d let people know a little bit more about it, especially as it provides a core organization that might provide a core organization around which to put together the rebuilding of the entire region.  There can obviously be improvements to make it more consistent with the Just Third Way, but the solidarity movement is a great advance over previous arrangements: 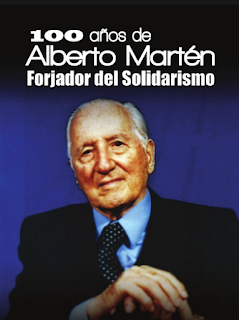 Costa Rican solidarism began with the social reforms of 1940-1943.  Driving the effort was Lic. Alberto Martén Chavarría, named a “Benemérito de la Patria” before his death and renowned as an eminent intellectual.  On September 15, 1947, Don Alberto announced his “Plan Martén” to make every person a capital owner, which — consistent with the theories of Father Heinrich Pesch — constitutes the foundation of solidarism.  Today, Plan Martén, is an important Costa Rican “export” to other countries in North and South America.
In the decades since its founding, the solidarity movement has grown to nearly 1,500 associations, as well as approximately 400,000 affiliates, being the premier organized social labor force in the country. It contributes to a harmonious relationship between workers and entrepreneurs, as well as peace and social justice, and the integral development of participants and their families. It is a key element in equitable, sustainable, inclusive, and participatory human development in Costa Rica.
But what is “solidarism”?
Solidarism is a system that fosters production, democratizes capital ownership, and satisfies the aspirations or needs of entrepreneurs and workers. In addition, it believes that capital and labor — the employer and the worker — must be united to increase production and improve the socio-economic conditions of workers.

According to the Law of Solidarity Associations No. 6970, “solidarity associations are social organizations that are inspired by a human attitude, through which man identifies with the needs and aspirations of his fellow men, compromising the contribution of their resources and efforts to meet those needs and aspirations in a just and peaceful manner.”
The fundamental aims of solidarity associations are: to seek justice and peace, harmony between workers and management, and the integral development of participants and their families. These principles apply to both the public and private sector, and conform to strict democratic principles.
Solidarity associations are recognized as corporate persons under the law.  To achieve their objectives, they can own property, enter into contracts, and carry out any lawful operation aimed at the socioeconomic improvement of their members, in order to enhance human dignity and raise the standard of living. They can provide saving, credit, and investment facilities for their members, as well as any other profitable activity. They can also develop housing, scientific, sporting, artistic, educational, recreational, cultural, spiritual, social, and economic programs, as well as any other that legitimately fosters the bonds of union and cooperation among workers and between them and their employers.

The government and administration of these associations is exclusively the responsibility of affiliated workers. However, the employer may designate a representative, with the right to speak but not to vote, to attend general assemblies and sessions of the board of directors of the solidarity association. This constitutes a fundamental strength of solidarism, since it is a guarantee of the good management and the transparent and effective administration of the economic resources of the solidarity workers and the contributions of the employers.
While not consistent with the monetary, financial, and tax reforms of the Just Third Way, members contribute no less than three percent but no more than five percent of their salaries to the association instead of financing using “pure credit” extended by commercial banks. They also receive monthly employer “contributions,” which are fixed by agreement between the employer and the workers affiliated with the association. The contribution of most companies is 5.33% of the salary of each worker. This contribution remains in the association as a reserve for the payment of mandatory legal benefits. Any surplus is distributed to the workers at year end.

With solidarity, unemployment insurance is transformed into an effective right (in a premium of seniority), since the employer's contribution is paid to the worker in every case of termination of employment (even in cases of resignation and dismissal justified).  In contrast to other worker organizations, such as labor unions, in solidarity associations the positions of directors (members of the board of directors) and of prosecutors receive no compensation.
Solidarism has no political, partisan, religious or ideological commitments, but encourages its members to support and strengthen representative and participatory democracy. It is intended to solidly and fraternally unite employers and workers so that, by helping each other, they can achieve greater common and individual wellbeing.
In solidarism, the person is a being in family and for the family. It pays great attention to the spiritual and civic formation of the worker, because he considers that, before being a producer, he is a human being.
#30#
Posted by Michael D. Greaney at 6:00 AM