To succeed on the ideological front, it would help to organize on a regional basis, perhaps within a regional bank with central banking capabilities, such as the Central American Bank for Economic Integration. From such a base it would be easier to advise on the infrastructural changes that would be necessary within one or more of the developing countries willing to cooperate on the new agenda for stimulating private sector growth linked to broadened ownership.
The strategic objectives would be to maximize growth rates, jobs, and productivity of the private sector within selected countries or target areas, with a zero rate of inflation, and maximum ownership and profit sharing opportunities among all private sector workers as a supplement to free market wage rates.
The four main components of this agenda for economic justice are:
·      A new social contract with workers based on expanded capital ownership;
·      A two-tiered capital credit system for local banks;
·      A regional SDR to establish lower-tier-capital credit; and
·      The multinational corporation as a primary vehicle for accelerating private sector growth linked to expanded ownership.
Today we look at —
A Regional SDR to Establish Lower-Tiered Capital Credit (II)
The third major component in the agenda for economic justice is to mobilize friendly countries in a development region like the Caribbean Basin in support of a new unit of international credit. The IMF cannot be expected to play this role. As mentioned earlier, the Central American Bank for Economic Integration might be the ideal place to start this new initiative. CABEI could, with the backing of the United States and countries which might respond positively to these ideas, issue a new currency, a Caribbean Basin SDR, to be used for regional economic development linked to expanded capital ownership and issued exclusively through the lower-tier discount window of the regional central bank as outlined below:

Eligibility for access to the lower-tier discount rate at the regional central bank should be based on the following criteria:
(1) The privilege of discounting “eligible” paper should be limited exclusively to commercial banks declared “eligible” by the regional central bank.
(2) “Eligible” loan paper should be:
(a) Limited to private-sector productive credit instruments;
(b) Issued for any commercial, industrial, or agricultural purposes or ventures determined to be economically feasible by the lending bank. (Credit for speculation in securities or commodities, unfriendly acquisitions, consumer or home purchase credit, public-sector programs, or for other non-productive purposes should be declared specifically ineligible for lower-tier interest rates.);
(c) Designed to be repaid on a self-liquidating basis, primarily through projected future pre-tax profits of the enterprise guaranteeing the loan’s repayment; 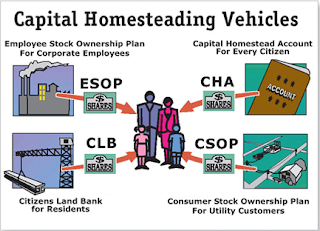 (d) Made the direct debt obligation of a capital credit mechanism that is “qualified” for ownership-expanding purposes by the regional bank or some expanded ownership authority approved by the cooperating countries in the region, including an ESOP trust for corporate employees; a general stock ownership corporation (GSOC), a professionally-managed real estate planning and development corporation for spreading equity ownership among residents of development communities; production and marketing cooperatives owned by workers and farmers; and small businesses and family farms which provide all their regular full-time workers with equitable opportunities to share in ownership and profits; consumer stock ownership plans (CSOPs) to spread equity ownership among customers of highly capital-intensive enterprises, like public utilities, cablevision, mass transit systems, etc.; and Village Corporations, for equity participation by rural workers in integrated agro-industrial enterprises; 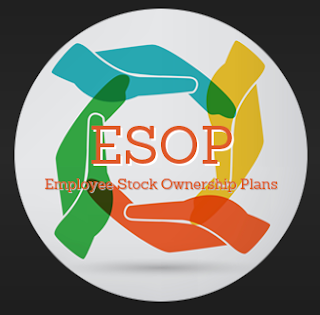 (e) Collateralized by whatever tangible and intangible assets are to be acquired with the loan proceeds, plus shares of corporate stock to be acquired by an ESOP or other qualified capital diffusion mechanism;
(f) Guaranteed by the general credit of the sponsoring enterprise;
(g) Endorsed for negotiability by the member bank or banks discounting such paper;
(h) Insured to cover the risk of default, when appropriate, by a premium paid by the borrower or the lending banks to a regional central bank-approved public or private capital diffusion insurance company;
(i) Supported, when appropriate, by documented business plans and feasibility studies justifying the need for capital credit; and
(j) Endorsed by every collective bargaining unit representing employees of the sponsoring enterprise whose members are to receive ownership benefits as a result of the loan.
(3) All credit charges (including bank administrative charges and profits, the risk of default, etc.) above the fixed central bank discount rate of 1% or less, would be set by marketplace competition between qualified member banks. While higher-risk loans would naturally cost more, the normal bank mark-up on money to their best business customers would still keep the lower-tier prime rate at about 3%.
(4) The regional central bank could also require that all new currency issued through the lower-tier discount window be matched by “eligible paper,” creating an asset-backed currency reflecting the economy’s true increases in productive capacity. The central bank could add a 100% reserve requirement for lower-tier participation. This would eliminate the power of member banks under fractional reserve banking to leverage their lending capacity for “non-eligible” purposes with currency supplied at lower-tier rates. The supply of new money would thus be tied closely to real income-producing growth of the economy, thus keeping the region’s overall money supply under tightened control of the regional central bank.

Other Advantages of a Two-Tiered System
The two-tiered interest system would not involve tax-payer dollars. No loan funds or interest rate subsidies would come from the taxpayers or in any way increase government borrowings. (In fact, this radical lowering of the cost of money to local banks and their business borrowers-by accelerating growth in private investment, jobs, and productivity should quickly begin to cut government deficits.)
Since the two-tiered interest strategy would strike directly at the underlying causes of inflation-by discouraging excessive demand with higher interest rates and by encouraging maximum production with 3% prime rates or lower–an “inflation premium” would not be justified for capital credit linked to broadened ownership.
“Eligible” commercial banks, not the regional central bank itself, would still scrutinize feasibility of each loan before it was made. Approved local banks with access to the discount windows of the regional central bank would make all loans and set interest charges to eligible borrowers. Thus, bank lending practices could continue to insulate the central bank from political pressures to favor one borrower over another.
For both the upper and the lower tiers, the market would still determine the cost of money, including bank charges and profits. Bank markups and differential risk premiums which are normally included in interest rates would not be reduced. Both the volume of loans through the commercial and agricultural departments of local banks would greatly expand, along with bank profits. Once commercial loan officers fully understand their expanded role and new business opportunities under the two-tiered credit system, they can be expected to support it. (Today less than 20% of all U.S. new capital formation is financed through commercial banks.)
#30#
Posted by Michael D. Greaney at 6:00 AM