How to Make Tax Reform Even Worse


All the recent talk about tax reform, good, better, and worst, has focused on the debate as to which philosophy of taxation, and which specific tweaks to the existing system, will best stimulate an acceptable rate of economic growth.  Commentary has ranged from the sublime to the ridiculous, with the usual barrage of inane and erudite remarks, interspersed with more or less veiled attacks on the intelligence, motives, and fashion sense of anyone on the other side, but no one has raised the real issue here:


What is the real function of taxation? 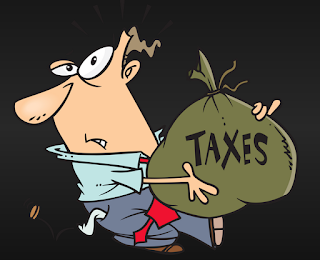 One of the most serious problems facing government today is understanding the proper role of taxation.  The Wall Street Journal has been running articles discussing what tax reforms will best stimulate economic growth.  This actually avoids the real issue, which is, What is the purpose of taxation?"
Is it to stimulate or put a damper on economic growth?  No.  The sole purpose of taxation is to raise the money to run government.  That's all.
Unfortunately, as ordinary people have lost the means of owning capital at the same time that capital is replacing them from their jobs, the State has had to assume increasing responsibilities for taking care of people.
What this really means, as the solidarist labor economist Goetz Briefs pointed out in his 1937 book The Proletariat, is that the taxpayer has assumed the responsibility . . . at the same time that taxpayers are less and less able to pay unless they own capital!
In response, the State starts creating money by emitting bills of credit.  This finances government and redistributes wealth with inflation instead of by direct taxation.
This also creates a vicious circle that puts a greater and greater burden on the people who have only wages or pensions on which to live.  At the same time, ironically, it spares the wealthy owners of capital whose profits increase with inflation as they simply raise prices.
So, in the ideal world where people gain income from both capital and labor, ALL income above a level sufficient to meet ordinary living needs (including education and healthcare) should be taxed at the same rate.  In the current state of society, however, it makes little sense to tax wage income at a higher rate than property income, or even exempt property income from taxation.  That just means that the people least able to pay are paying a heavier burden — which becomes even greater when the government inflates the currency.
It makes more sense, therefore, whether under Capital Homesteading or in the current state of society not to tax property incomes (or any other income) at a greater rate than wage or "ordinary" income.  This has the added benefit of encouraging financing investment out of future savings by means of which everyone can become an owner, instead of past savings that restrict ownership to the currently wealthy.
Once everyone has the means to own capital and does own capital, of course, the tax system should be reformed to levy the same tax rate on everybody.  This is because everybody would then have an equal ability to pay; one of Adam Smith's four principles of taxation is that you only tax those who can afford to pay taxes(!).  After all, why tax people who can't pay, unless you're hoping for an excuse to put them in jail?
#30#
Posted by Michael D. Greaney at 6:00 AM