Continuing our examination of a program that could be instituted to rebuild Puerto Rico and the rest of the Caribbean, today we begin looking at Part II of the “strategy paper” that led to the Presidential Task Force on Project Economic Justice, “Project Economic Justice: A Beachhead for Regional Infrastructural Reform,” to be followed by President Reagan’s speech to the Task Force.  Today we post the first section of Part II, along with an introductory section that will be repeated for each section as it is posted: 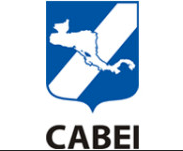 To succeed on the ideological front, it would help to organize on a regional basis, perhaps within a regional bank with central banking capabilities, such as the Central American Bank for Economic Integration (CABEI). From such a base it would be easier to advise on the infrastructural changes that would be necessary within one or more of the developing countries willing to cooperate on the new agenda for stimulating private sector growth linked to broadened ownership.
The strategic objectives would be to maximize growth rates, jobs, and productivity of the private sector within selected countries or target areas, with a zero rate of inflation, and maximum ownership and profit sharing opportunities among all private sector workers as a supplement to free market wage rates.
The four main components of this agenda for economic justice are:
·      A new social contract with workers based on expanded capital ownership;
·      A two-tiered capital credit system for local banks;
·      A regional SDR to establish lower-tier-capital credit; and
·      The multinational corporation as a primary vehicle for accelerating private sector growth linked to expanded ownership.
Today we look at —
A New Social Contract With Workers Based on Expanded Capital Ownership
The traditional wage system rests on a “conflict theory” of management-labor relations. The traditional system takes for granted that workers and owners have different interests and therefore assumes that they will be in conflict. That assumption vanishes under a system which attempts to maximize the ownership opportunities of working people, whenever possible enabling the management and non-management workers to acquire up to 100% of the firm they work for. 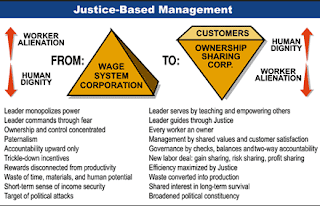 The expanded ownership system assumes a merger of interests among all persons with an ownership stake in the enterprise. If implemented properly, maximum profits and maximum justice go together. Job security is enhanced by everyone agreeing to accept modest base wages, generally set in the freely competitive market-place. This allows the company to operate with low fixed costs when times are rough. But workers participate in a monthly cash bonus plan and an annual cash bonus plan, both based on a formula linked to productivity and profits. A wage differential may be instituted so that the highest paid manager is paid a multiple of what other full-time workers are paid, with his increases also coming from his proportionate share of productivity and profits of the overall company; in this way all members of the team prosper or tighten their belts together. 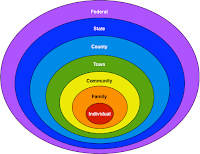 The best ESOP models allow employees to vote their ownership stake in the company, normally measured by their shares of stock. An employee-owned company is generally structured to permit delegated powers and responsibilities, with a minimum of formal meetings or group decision-making. Thus, it is a system which must be delicately structured (like a republican form of government) to balance efficiency with justice; a high degree of autonomy for leadership decisions, with high levels of management accountability and disclosure of results; professionalism at the top, with self-management of the workplace. The basic principle of management is that of “subsidiarity,” where authority is left as close as possible to those responsible for doing the work.
Workers earn their ownership shares, generally based on credit extended to them individually or jointly and repayable with their share of future profits. Ideally, the tax system would avoid the double tax on corporate profits, so that the capital credit for workers could be repaid with future dividends. In the United States workers are taxed on the bonuses or dividends they receive in cash, but they are not taxed until retirement on the stock they accumulate within an ESOP trust. Tax laws that allow workers to accelerate the rate of their equity accumulations help promote savings and investment within the private sector, while reducing the need for redistributive taxation. (See the “Expanded Ownership Act” introduced by Senator Long for additional tax reforms to encourage employee stock ownership.) 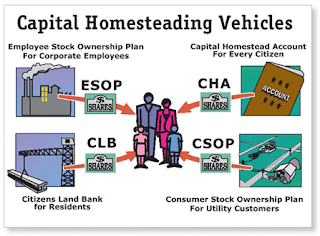 Remember, one of the unique features of an ESOP is that it systematically extends the benefits of capital credit among all workers of a company. This allows the employees to borrow to buy outstanding stock from an existing owner (including the government, where it wishes to denationalize a nationalized enterprise), or to buy newly issued stock directly from the company for meeting the expansion or working capital needs of the company. A properly designed loan to an ESOP is more secure than a straight loan to the company because, in addition to normal security on loan repayment, the workers have a stake in the outcome and there are special tax advantages for all parties.
This “ESOP Advantage” can easily be extended to every child, woman, and man in the Caribbean by means of a regional “Capital Homestead” or “Economic Democracy” Act, so that all forms of individual and joint ownership with the full rights of private property can be employed to maximize participation in economic growth by everyone.
#30#
Posted by Michael D. Greaney at 6:00 AM