Last week — last year, in fact — we looked at how, if everybody who consumes, produces, and everybody who produces, consumes, things would work a lot better in the world.  That’s because Say’s Law of Markets has four things going for it that most people don’t look at.  And they are?
• One, capital is productive, and is productive in the same way that labor is productive. 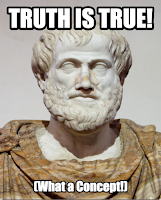 This is just the first principle of reason applied to economics: “That which is true is as true, and is true in the same way, as everything else that is true.”  Deny that capital is productive in the same way as labor, and you get into a mess of contradictions you’ll never be able to get out of . . . not the least of which is the fact that you can’t have different kinds of truth.  You can have different truths, obviously, but not different kinds of truth, e.g., some that are half true or one third true, or some that are true today and the day after, but not the rest of the week.
• Two, all things being equal, the only way to consume is to produce.
• Three, money is anything that can be accepted in settlement of a debt.
• Four, new capital formation can be financed with future as well as past savings.
All of these things seem obvious, but modern economics as a whole has dedicated itself to denying them as a fundamental principle.  This has led to an extremely distorted understanding of money, credit, banking, and finance, which in turn has led to making the underlying problems even worse.
And what is the main problem?

People who are unable to produce, and therefore are unable to consume.  Remember: all other things being equal, the only way to consume is to produce.  When people cannot produce, something must be done to meet their consumption needs, or what was a simple economic problem (how people can consume) turns into a major political problem (how to keep order in society when people are starving).
Thus, what should be the major, if not sole focus of government — how to assist people in becoming and remaining productive (thereby growing in virtue and all that other good stuff) — becomes transformed . . . twisted, if you will.  Governments implement policies that try to guarantee that most if not all people have sufficient effective demand to enable them to consume when they do not or cannot produce. 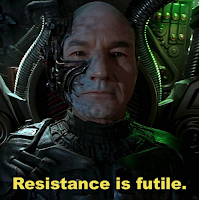 This in turn requires ever-increasing levels of State interference not only in the economy, but in every aspect of life as people (many of whom are absolutely convinced they are doing the right thing) struggle either to redistribute enough wealth while permitting others to retain enough to finance new capital to create jobs, or retain enough while permitting others to redistribute enough to keep people alive.
It becomes easy to see why Aristotle and Aquinas emphasized that a seemingly small error in the beginning leads to gigantic errors in the end . . . and here we have not one small error, but four rather significant ones.  Consequently, here’s what happens:
When labor is the sole factor of production . . . everybody starves to death.  If you think that’s an exaggeration, you try stripping yourself buck naked and run around trying to scrounge up enough to eat using absolutely no technology at all, not even something to keep your hair out of your eyes.  Assuming you live long enough to let it grow that much.
More realistically, when labor is the predominant factor of production, most people can sell their labor for enough to generate an income sufficient to maintain them and their dependents in reasonable comfort.  Of course, it also gives some people with pointy sticks and guns the incentive to try and get something for nothing, and turn other people into slaves, but that’s a discussion for another day. 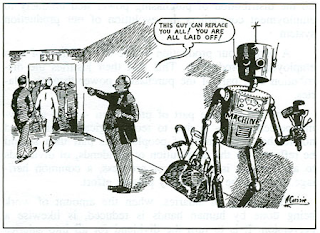 As technology advances, the effect is to reduce the role of labor and decrease its value as a factor of production relative to technology.  True, advancing technology also spurs economic growth in general, which creates new jobs and increases the demand for, and thus the real value of labor overall.
. . . up to a point.
And that point?  When the added value of the general economic growth spurred by advancing technology is less than the cost of the labor required for new jobs, or other new technology costs less than creating new jobs, labor will decrease in value in both relative and absolute terms to technology.  Real income to labor will decrease at the same time the demand for labor declines, while real income to owners of capital will increase at the same time that the demand for new technology grows.
. . . up to a point.
And that point?  When the decrease in real income to labor is such that overall demand decreases enough to render new capital formation financially unfeasible, i.e., new capital won’t pay for itself out of future profits because future profits are either insufficient to repay the debt, or there aren’t any profits because the owners of capital can’t meet the costs of production out of sales to a diminished customer base. 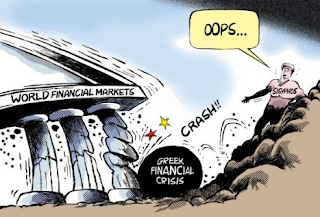 So what happens?  Governments try to encourage new capital formation in order to create jobs by messing with the tax system, and to increase effective demand to make the new capital financially feasible by messing with the monetary system.  Producers get favorable tax treatment to form new capital, and punitive tax treatment to redistribute the income from capital.  The government creates massive amounts of debt-backed money to stimulate or increase effective demand, which redistributes demand by inflating the currency, decreasing effective demand and discouraging production.
Yes, this is all contradictory, but it works.
. . . up to a point.
And that point?  When producers no longer produce more value than the government redistributes by inflating the currency, or taxes away too much of other people’s profits for redistribution.  At that point, people lose faith in the currency and have no confidence in the financial or economic system.  Everything goes belly-up until a dictator steps in to restore order.
Obviously, what is needed is a solution that can make ordinary people productive again without massive government interference . . . which doesn’t work, anyway.  We’ll look at a possible solution tomorrow.
#30#
Posted by Michael D. Greaney at 6:00 AM