Back in 1984 Father William Ferree, S.M., Ph.D., Dr. Norman Kurland, and a number of others came together in a cafeteria at the American University in Washington, DC, and organized the interfaith Center for Economic and Social Justice (CESJ).  From the first — possibly because of the cafeteria connection — CESJ events have almost always included food and drink.  There has even been talk of putting together a collection of recipes one day. 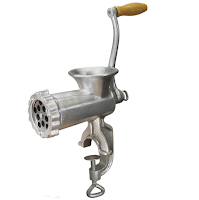 Be of good cheer.  This is not a recipe posting.  Frankly, we’re not sure how to categorize it, except possibly as a riff on binary economics dragging in food . . . something of which we are particularly fond, finding it hard to survive without some.
So, how are we dragging in comestibles?  What started us thinking was a FaceBook posting showing a meat grinder with the usual, “If you recognize this, like and share.”
Well, we recognized it, but we didn’t like and share.  Instead, we looked over some of the comments, most of which were along the lines of, “Where can I get one?” and people telling them to look at garage sales and E-Bay.

Amateurs.  We got all the equipment we needed to make sausage from “The Sausage Maker” in Buffalo, New York, so we gave them the link, and advised them to get Rytek Kutas’s book on sausage making, even if we think it’s a little pricey (but what books aren’t, these days?).  He wasn’t a particularly good writer, and the recipes sometimes need tweaking — he mixed weight and volume measurements sometimes for spices, which is confusing.  He tells you what you need to know, however, and that’s the main thing.  We also added some of our own “secrets,” such as making your own casing for lunch meats from unbleached muslin (old farmer’s trick), and getting regular powdered milk and pulverizing it in a blender instead of buying the special finely powdered milk as a binder. 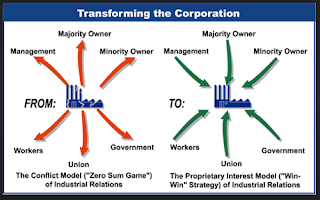 Now, we have no idea if the Sausage Maker, Inc., is worker-owned.  We don’t know if they have Justice-Based Management.  They should, of course, and could avoid all corporate income taxes by becoming a 100% worker-owned S-Corp ESOP along the lines outlined by Equity Expansion International, Inc.  We haven’t even ordered from them for a while.  Our goal was just to give information about a place where, if you were really into doing things yourself, saving money, and getting a higher quality product than is generally available commercially except at a prohibitively high cost, you might want to check them out.  We’ve always been perfectly satisfied.
And now for the main point of this posting.
With the ascendancy of Keynesian economics, there appeared an artificial dichotomy in “the dismal science” (which doesn’t have to be dismal at all) between “micro” and “macro” economics.  This resulted from the Keynesian basis on the Currency Principle, which is that (most simply put) the amount of money in the economy determines the velocity of money, the price level, and the number of transactions.
Keynes believed that only the government can legitimately create money.  This is a logical conclusion for a collectivist trapped in the slavery of past savings.
Unfortunately, Keynes also believed that the proper backing for the money supply is government debt.  This meant that the split between “microeconomics” (domestic or household economy) and “macroeconomics” (national economy) — implicit from the very beginning in the Currency Principle — became part and parcel of the science of economics.
All of a sudden there was justification for the government going directly contrary to common sense.  Of course it is essential that individuals and private sector organizations such as businesses save.  That is essential to finance new capital formation.  There won’t be any new capital if people can’t save!
That’s the micro level, however, the level of the individual, family, or single business enterprise.
And the macro level?
Well, the money has to come from somewhere, doesn’t it, or there won’t be anything for people to save!  And since only the government legitimately creates money, and only government debt can back the money. . . .
You see where this goes.  The belief that the micro economy differs fundamentally from the macro economy can be traced to — and is justified by — the idea (among others) that it is good for individuals to save, but bad for governments.  The utterly insane corollary also gains political and economic acceptance: that it is bad for individuals to be in debt, but good for governments.
We’ll continue with that thought Monday.
#30#
Posted by Michael D. Greaney at 6:00 AM