Last Thursday we looked at the reason why Keynesian economics divides the science into “micro” and “macro”: to justify crazy stuff that no one with any common sense would accept if it wasn’t presented to him or her by people hiding their pointy heads behind Ph.D.s . . . which could easily stand for, “Pointy-headed Dunces.”
Why, specifically?  So that politicians have a good, “scientific” reason for spending as much as they can get away with, and going into astronomical amounts of debt that they keep chanting they don’t have to repay or we wouldn’t have a money supply.
None of this nuttiness could be reconciled if the micro level and the macro level weren’t artificially separated.  Nor does Keynesian economics allow for any reconciliation; the Keynesian system absolutely requires acceptance of fundamental contradictions if it is to be maintained.
. . . which, of course, violates the first principle of reason, the “law of contradiction”: nothing can both be and not be at the same time under the same conditions.  (Unless you’re a Keynesian economist, evidently. . . .)
There is good news, however.  Binary economics is not based on the Currency Principle, but on the Banking Principle.  And what is the Banking Principle?
Most simply put, the Banking Principle is that the velocity of money, the price level, and the number of transactions determine the amount of money in the economy, not the other way around, as the Currency Principle has it.  That’s because under the Banking Principle, money is anything — anything — that can be used in settlement of a debt, that is, to carry out a transaction.
That means that under the Banking Principle there is never anything like a shortage of money.  Or a surplus.  Everything else being equal, there should always be exactly enough money in the economy to carry out all transactions.  Given that every consumer is a producer, and every producer is a consumer, supply will equal demand, and demand will equal supply.
If something can be put into a contract, it can be money.  If one form of money isn’t satisfactory or acceptable in a particularly transaction, well, take your money (called a mortgage or bill of exchange) to a commercial bank, and have it converted into currency or a currency substitute that is acceptable, and use that in the transaction.
That is, in fact, why commercial banking was invented.  I have chickens, and you have hogs.  I want hogs, but you don’t want chickens.  Instead, you want cows, but the guy with cows doesn’t want hogs but apples . . . but the apple guy doesn’t want cows. . . .
What do we do?  Easy.  We go down to the commercial bank and trade a contract for future delivery of chickens, hogs, cows, apples, . . . whatever . . . for the bank’s promissory note denominated in “dollars,” an arbitrary unit with a fixed value that we have all agreed upon as a measure of value.  The bank issues banknotes or creates demand deposits backed by the promissory note (which is backed by our promises to deliver chickens, hogs, cows, and apples — or cats), and we carry out our transactions using “dollars” instead of actual chickens, hogs, cows, or apples (or cats).  When our contracts are due and payable, we either hand over the chickens, hogs, cows, or apples that the contract obligates us for, or (if the contract so provides) other “dollars” that equal the value of what we were to deliver. 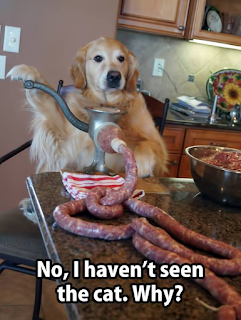 If it’s that easy, then why would governments insist that there is a difference between the micro and macro levels?  Why do you think?  It gives the politicians all the excuse they need to spend money, and go into debt without limit.  If it weren’t for Keynesian economics, governments might actually have to limit their spending to what they could collect in taxes or borrow from other people’s savings, not to the amount of debt they could force on the economy before people caught on to the scam.
The bottom line here — and to bring it full circle back to legitimate sausage making (not the unpalatable hash that Keynesian economics has made of virtually everything) — there is no real difference between micro and macro economics, any more than there is between micro and macro production.  Small is not beautiful any more than big is bodacious.  It’s whatever fits the circumstances best in the most optimal fashion.
Do you want sausage customized to your particular taste that you don’t have to spend an arm and a leg getting?  Do you want production and consumption to be in balance with all of the guesswork removed?  Do you want to be in control of your own life?
Try looking into the Just Third Way.  You might be pleasantly surprised.
#30#
Posted by Michael D. Greaney at 6:00 AM