The Problem of Wealth, II: The Capitalist Solution

In a sense, this posting might be considered a trifle redundant.  That of a few days ago covered the agenda of the World Economic Forum currently meeting in the resort town of Davos, Switzerland.  Briefly, the discussions center on two issues in the struggle to find a viable solution to the growing problem of poverty.  These are, one, how to create jobs, and, two, how to train people to fill those jobs.
Sounds simple, right?  Given that the real way to fight poverty is to make people productive, and the way to be productive is to have a job, then — obviously — the way to lift people out of poverty is to find them jobs.  The whole of Keynesian economics is based on the assumption that the only way to have adequate income is to have employment.  If you want to eliminate poverty, your goal is full employment.
Oddly enough, full employment is the goal of both the capitalists and the socialists, except for a few socialist sects like social credit.  Social credit, the brainchild of Major C.H. Douglas, is one of the few schools of economic thought that acknowledges the productiveness of technology.  True, social credit theory embodies some serious flaws otherwise, but it got at least one thing right.
Consistent with the focus on human labor as the sole factor of production, at least for the vast majority who own no capital, both the capitalists and socialists insist that a wage system job is the goal, while redistribution on the basis of need is an expedient.  The difference is in how the capitalists and the socialists view the expedient.
To the socialists, redistribution is a fundamental human right, perhaps the only real right.  Whether or not someone contributes to production, he or she must receive what is needed for a decent life.  People should, of course, work for what they get, but they have an absolute right to receive what they need, regardless.
To the capitalists, redistribution is a matter of prudence, an act of charity.  It is a moral, but not a legal duty.  Such charity may be necessary at times, but the goal must always be to put someone to work in a wage system job.
Ironically, both the capitalists and the socialists are right . . . sort of, in a limited and very distorted fashion.  Both groups have a lot to learn.  The socialists need to learn that what people have an absolute right to is not the results of production, but the means to become productive.  What the capitalists need to learn is that having an absolute right is meaningless if only a few people have the means to exercise it.
So — why is the capitalist solution to global poverty off base?  Why aren’t job creation and job training sufficient to establish and maintain a stable economic order?  Won’t that make people productive?
Job creation and job training are not merely insufficient as a solution to the problem.  They are egregiously counterproductive.
That’s because human labor is not the sole factor of production, whether or not enhanced by land or technology.  Land and technology are also productive, and productive in the same way — “that which is true is as true, and is true in the same way, as everything else that is true.” 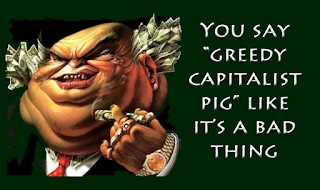 Thus, if a thing is productive, it is productive as that term is meant with respect to human labor, and is productive in the same way as human labor.  The owner of land or technology is therefore as productive, and productive in the same way, as the owner of labor.
There is only one difference between owning labor and owning capital.  Still, given the natural right of private property, it is not a legal difference.
The difference is that human labor cannot be separated or alienated from the human being.  (What human labor produces can, of course, be so separated; it’s called “slavery.”)  External possessions, on the other hand — such as land and technology — can be separated from human beings.  The problem of poverty in the modern world is not one of not enough jobs employing human labor, but of not enough ownership of capital.
That’s because as technology advances, it displaces human labor from production.  This would be a good thing, as Hilaire Belloc pointed out over a century ago, if everybody owned that technology.
But they don’t.  The socialists try to solve this problem by abolishing private ownership of capital.  The capitalists try to justify the problem by insisting that concentrated ownership of capital is necessary to finance new capital, and that new capital is necessary because it creates jobs!
And the capitalists are 100% wrong.
We’ll take a look at why on Monday . . . after the World Economic Forum concludes its business tomorrow and issues its recommendations to create jobs and train people to fill them.
#30#
Posted by Michael D. Greaney at 6:00 AM