Yesterday was Thanksgiving Day in the United States, and — believe it or not — there is a great deal to be thankful for.  For one thing, you’re reading this, which proves that you can read this.  Another is the publication of Economic Personalism.  Still another is that with a new administration coming in, there just might be a wiser head or two realizing politicians and academics have to start thinking outside the box instead of trying to find a different or bigger box to hide in:

• Economic Personalism.  The book, Economic Personalism: Property, Power and Justice for Every Person, is now available on both Amazon and Barnes and Noble at the cover price of $10 per copy.  If you’d like to “try before you buy” (or just don’t have room on your shelves for another book), download the free copy in .pdf available from the CESJ website.  If you’d like to order in bulk (i.e., ten or more copies) at the wholesale price, send an email to publications@cesj.org for details.  CESJ members get a $2 rebate per copy on submission of proof of purchase.  Wholesale case lots of 52 copies are available at $350, plus shipping (whole case lots ONLY).  Prices are in U.S. dollars.

• Dr. Jane James.  Dr. Jane James, a Clinical Assistant Professor of Social Work at the University of Southern California, has introduced a number of doctoral candidates to the Just Third Way and is working to present the paradigm to leaders in Academia, starting (naturally enough) with U.S.C.  At present, a major focus is strategizing on how to get these ideas to the incoming administration in the United States, especially as the danger is that political leaders as well as academics and religious leaders will continue to mistake critically needed emergency measures for solutions, and not take steps to implement the Economic Democracy Act. 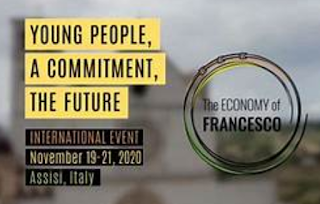 • Economy of Francesco.  The three-day conference on global economics at Assisi in Italy sponsored by the Vatican closed last week with results that can only be called disappointing, whatever your orientation.  If you were a supporter of the conference, you had to be disappointed at the near-total lack of media response.  For those who watched the presentations, they came off as remarkably lacking in substance and — as is not unusual for presentations by Young People™ — tended to take the viewers’ presumed values for granted and while production values were generally good came off as pretentious fluff.  The general effect was one of scolding people for not going along with some extremely vague, albeit generally well-intentioned goals with no practical means suggested for attaining them except that (other) people should do the right thing as defined by Young People™.

• Woke Capitalism.  Frankly, the “other side” of the argument in favor of Big Business™ hasn’t done much better, although the arguments are presented in a somewhat more coherent manner.  As described by Andrew V. Abela, Dean of the Busch School of Business at the Catholic University of America in Washington, DC, in his op-ed piece in today’s Wall Street Journal (“Woke Capitalism in a Secular World,” WSJ, 11/27/20, A-13), all that is necessary for capitalism to triumph is to adhere to a sound ethical framework . . . which sidesteps the issue of whether a system based on concentrated capital ownership and rule by Oligarchs and Plutocrats is in any way ethical to begin with.  “Ethical capitalism” is, after all, a little like “happy sadness” or “white black.”  In Rerum Novarum (1891), Pope Leo XIII called for widespread direct capital ownership by “as many as possible of the people.”  This is the antithesis of both capitalism and socialism, as explained in CESJ’s newest book, Economic Personalism.

• Pouring on the Cash.  There is also the problem of the experts who insist on confusing essential, if temporary expedients with a lasting solution.  Alan  S. Blinder of Princeton University in the same issue of the Wall Street Journal in which Dr. Abela published his apologia for capitalism, opined that “A Speedy Recovery Depends on More Aid. Will Trump Deliver?” (WSJ, 11/27/20, A-15).  Setting aside the fact that such matters are properly the purview of the Congress, a “speedy recovery” does not depend on infusions of funny money that do nothing to turn unproductive people into productive people.  All it does is stimulate a temporary increase in consumption.  Yes, as Dr. Harold Moulton pointed out in 1943 in The New Philosophy of Public Debt, Keynesian “pump priming” may be necessary at times, but it is not a solution.  It is a temporary expedient intended to kick start an economy . . . which has been proven time and again to be inadequate, especially when it continues instead of being a one-time thing.  What is really needed is the Economic Democracy Act to turn people who currently do not produce into people who do produce. 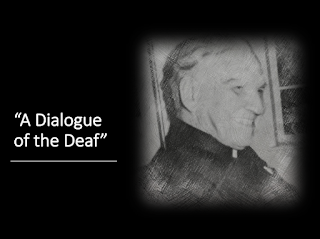 • Sensus Fidelium Videos, Update.  The complete series of sixteen videos on of the series on socialism we’ve done with the “Sensus Fidelium” YouTube channel is now available, along with some book reviews and other selected topics.  For “interfaith” presentations to a Catholic audience they are proving to be popular, with nearly 70,000 views to date.  They aren’t really “Just Third Way videos,” but they do incorporate a Just Third Way perspective.  You can access the playlist for the entire series by clicking on the link: “Socialism, Modernism, and the New Age.”  The point of the videos is to explain how socialism and socialist assumptions got such a stranglehold on the understanding of the role of the State and thus the interpretation of Catholic social teaching, and even the way non-Catholics and even non-Christians understand the roles of Church, State, and Family, and the human person’s place in society.

• Blog Readership.  We have had visitors from 36 different countries and 43 states and provinces in the United States and Canada to this blog over the past week. Most visitors are from the United States, Canada, the United Kingdom, the Philippines and Italy.  The most popular postings this past week in descending order were “News from the Network, Vol. 13, No. 47,” “The Purpose of Production,” “JTW Podcast, Socialism, Part 16: Where Do We Go From Here?” “A Basket Case?” and “Hope for the Future.”