A (Very) Short Treatise on Money and Banking

In the previous posting on this subject, we noted that a lot of the problems involving money and credit could be solved fairly simply (though not necessarily easily) by talking things out and persuading economists and policymakers to shift their thinking about such things (and, of course, do it our way. . . .).

That’s sounds easy in practice, and in some respects it is, but getting matters to that point can take a bit of doing.  It can even seem impossible, especially these days when so many people feel powerless, anyway . . . but that is the job of social justice — the real kind, not the whitewashed socialism that often goes under that label, sailing under false colors.

That is, when a task is too big for one person to handle, the “laws and characteristics of social justice” tell us the solution is not to give up or destroy whatever is causing the problem. Instead, the proper course of action is to organize with others and work to reform the institutional structures of society until the problem is solved. As Alexis de Tocqueville explained,

The political associations that exist in the United States are only a single feature in the midst of the immense assemblage of associations in that country. Americans of all ages, all conditions, and all dispositions constantly form associations. They have not only commercial and manufacturing companies, in which all take part, but associations of a thousand other kinds, religious, moral, serious, futile, general or restricted, enormous or diminutive. The Americans make associations to give entertainments, to found seminaries, to build inns, to construct churches, to diffuse books, to send missionaries to the antipodes; in this manner they found hospitals, prisons, and schools. If it is proposed to inculcate some truth or to foster some feeling by the encouragement of a great example, they form a society. Wherever at the head of some new undertaking you see the government in France, or a man of rank in England, in the United States you will be sure to find an association. . . . The English often perform great things singly, whereas the Americans form associations for the smallest undertakings. It is evident that the former people consider association as a powerful means of action, but the latter seem to regard it as the only means they have of acting. (Alexis de Tocqueville, “Of the Use Which the Americans Make of Public Associations in Civil Life,” Democracy in America, Volume II, Book II, Ch. V.)

Now, the first thing to realize when discussing money, credit, banking, and finance is that even most of the experts don’t know quite as much about these things as they think they do.  Many people are completely unaware that there are actually three different kinds of institutions that go by the name of “bank.”  This makes it next to impossible to understand how or why one type of bank must never be confused with another type of bank, nor be used incorrectly.  Each type of bank has a specific role to fill.  One of the “crimes” of Keynesian economics is to completely confuse the different types of banks and what they do, claiming there is only one kind.

By coincidence — there is no correlation between the fact that there are three different types of liberal democracy and banking — there are three basic types of banks.  These are banks of deposit, issue or circulation, and discount. 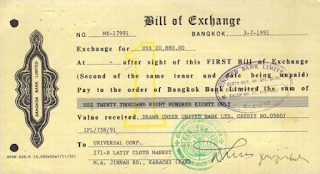 To understand the different types of banks, however, it is essential to understand “the first principle of finance.”  That is to know the difference between a “mortgage” and a “bill of exchange.”

In this context, a mortgage is a financial instrument defined as “a pledge or security for the payment of a debt or the performance of some other obligation,” the essence being that the asset exists, is identifiable, and “backs” the mortgage.  Because it is a “past savings” instrument, a mortgage bears interest.

In this context, a bill of exchange is a financial instrument defined as a written order that binds one party to pay a fixed sum of money to another party on demand or at a predetermined date.  It is not backed by a specific existing asset, but by the “creditworthiness” of the issuer.  Because it is a “future savings” instrument, a bill of exchange is “discounted,” i.e., passes at less than its face value until it matures and is redeemed.

A bank of deposit is what most people think of as a bank.  It is defined as a financial institution that takes deposits and makes loans.  A bank of deposit deals exclusively with past savings.  Things like credit unions, savings and loans, industrial banks (not what they sound like, but too long to explain here), mortgage companies, and so on, are banks of deposit.

A bank of issue or of circulation as a stand-alone institution is very rare today.  A bank of circulation is defined as a financial institution that takes deposits, makes loans, and issues promissory notes, usually intended to circulate as money in the community.  Deposits don’t have to be in monetary form.  John Law, for example, proposed that land be turned into circulating media by “land banks” by the landlord issuing a mortgage, depositing it in a land bank that would issue promissory notes in the form of banknotes secured by the mortgage on the land.  The “cheese banks” of Parma take possession of unaged parmesan cheese produced by local farmers, store it in caves for aging, and issue negotiable contracts that the farmers can take and sell to factors for cash now, and the factors redeem the contracts when the cheese is aged and can be sold at a profit to wholesalers and retailers.

A modern commercial or mercantile bank is a combination of a bank of issue and a bank of discount, and confuses matters further by assuming the function of a bank of deposit for non-commercial customers.  Nevertheless, we must recognize the fact that commercial banks — and central banks that run on the same principles — are critical institutions that must be understood and used properly if society is to advance in an equitable and just manner, with respect for the dignity of the individual and the personal sovereignty of every human being.