In the previous posting on this subject, we took a brief look at the current situation of the Commonwealth of Puerto Rico — and it is not good.  In social justice, however, we learn that (at least in social justice terms) “nothing is impossible.”  That doesn’t mean that something that is genuinely impossible can be done, e.g., flap your arms and fly to the Moon.  Rather, it means that by organizing using the techniques of social justice, what is impossible for one lone individual to accomplish becomes very easy (relatively speaking, anyway).

Thus, no one can flap his arms and fly to the Moon, but anyone can get organized with thousands, even millions of others, organize a space program, and send a mission to the Moon.  It’s been done.  Similarly, no one, not even a U.S. president, can wave a magic wand and make debt disappear, but he, she, and/or it can go to Congress, ask for the Economic Democracy Act, get it implemented, make people productive, and start paying down debt.

How long will it take?  We’ve done some crude estimates, and without causing pain (economic, psychological, or anything else) to anyone, are pretty sure the total national debt can be cleared away in a little over half a century.  By making it a national priority, it might be done in half that time, albeit with a significant amount of effort.  After all, in the 1870s France managed to pay off an indemnity deliberately intended to destroy the country in less than three years by making the payment the Number One Priority for the entire country. 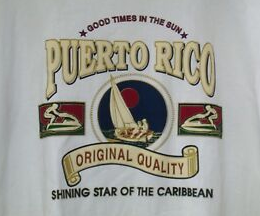 But to get back to Puerto Rico, the island was not always an economic disaster area.  Following World War II, the island abandoned its reliance on sugar and promoted a shift to industry.  A number of favorable tax provisions combined with local government subsidies made it attractive to U.S. investors.

At the same time, to counter the spread of Marxism in Central America and the Caribbean Basin, the U.S. promoted Puerto Rico as “the Shining Star of the Caribbean,” a model for countries that might otherwise be drawn into the Soviet sphere of influence, as was Cuba.

The capital to finance these enterprises came from U.S. institutional investors who grabbed up triple tax exempt and highly rated Puerto Rican-issued bonds.  Government employment skyrocketed.  Combined with massive emigration to the United States, Puerto Rico sustained a relatively low unemployment level.  This ensured a tax base sufficient to meet debt service payments.  Clearly, if the island was prosperous before, there is no reason why it can’t be so again — and that will be the subject of the next posting on this subject.