Today we have our third monthly “special edition” of the News from the Network that has a number of features that we are sure you will find interesting:


Quote of the Month

This month’s quote from Irving Fisher (1867-1947) was selected due to its significance in helping to understand the institution of “money.”  Admittedly, we do not agree completely with the monetary theory behind Fisher’s theories, nor completely with his theories.  For example, he formulated the Quantity Theory of Money Equation, M x V = P x Q, and then — as Dr. Harold Moulton pointed out — didn’t apply it correctly.  Fisher also considered money and credit a commodity, contradicting his own definition, but that takes nothing away from this quote taken by itself:

— Irving Fisher (The Purchasing Power of Money: Its Determination and Relation to Credit Interest and Crises.  New York: Macmillan and Co., 1931, 5.)

• Save the Economy By Spending. This week in the Wall Street Journal, there was an article relating how Federal Reserve officials plan on saving the economy again: spend more money.  (“Top Fed Officials Urge More Spending,” WSJ, 09/24/20, A-3.)  As Jean-Baptiste Say pointed out over two hundred years ago, however, you don’t stimulate economy activity by consuming more, but by producing more . . . as long as people own both labor and capital so that all production can be used for consumption income.  Otherwise, “multiplying barren consumptions” (creating demand without producing) as Keynesian economics requires simply makes the problem worse.

• EWTN Bookmark. Michael D. Greaney, CESJ’s Director of Research, will appear on EWTN’s Bookmark show with Doug Keck this Sunday, 10:00 am EDST (US).  The book will be Ten Battles Every Catholic Should Know.

• Is Pope Francis Wary of Economics and Finance?  With the resignation of Cardinal Angelo Becciu, there may be an explanation of Pope Francis’s sometimes puzzling attitudes towards economics and finance.  The fact that a high ranking Vatican official was able to get away with what he was doing as long as he did suggests that Pope Francis may be so uncomfortable with financial matters that he lets presumed “experts” guide him even against what would be his better judgment were he better informed on the subject.  True, many people are uncomfortable with economics and finance, but the principles of the Just Third Way of Economic Personalism are based on common sense, and could go a long way toward reducing the discomfort or eliminating it entirely.

• Sensus Fidelium Videos.  While not (entirely) earth-shaking, the series of videos being put out by the Sensus Fidelium YouTube channel are proving to be surprisingly popular, especially considering the fact that the channel is explicitly Catholic and religious.  Still, the story being related should be of interest to people of all faiths and philosophies who are concerned about how the world might have gotten itself into the shape it’s in and a possible way of getting out of it.

• Economic Personalism Book. The final edits are in, and now we are waiting on formatting and other things to get the book published and available to the public.

Social justice encompasses economic justice. Social justice is the virtue which guides us in creating those organized human interactions we call institutions. In turn, social institutions, when justly organized, provide us with access to what is good for the person, both individually and in our associations with others. Social justice also imposes on each of us a personal responsibility to collaborate with others, at whatever level of the “Common Good” in which we participate, to design and continually perfect our institutions as tools for personal and social development.


This month we bring you another “Just Third Way Classic” article, Dr. Norman Bailey’s piece in the Summer 1966 issue of The Yale Review:

The American Economy: Power and Paradox

Extract (slightly edited): “The United States, the most economically advanced nation in the world, has for some time been experiencing a disturbing series of economic dilemmas, similar at least in their seeming defiance of solution.  In the midst of plenty, poverty continues, and one “massive” governmental program after another fails to affect it.  The stock market continues to act erratically, and seemingly without relation to actual economic conditions.  Measures taken to deal with our deteriorating balance of payments turn out to be mere stopgaps.  Prices refuse to decline, regardless of recession or boom, and yet there is a distinct profit squeeze.  Directly productive investments in the public sector, in health, education, and transportation, are relatively starved, while billions are paid out to people who do nothing or who produce commodities no one wants.”

Read More of “The American Economy: Power and Paradox”

This month’s video is from what is proving to be a popular series on the background of the development of Economic Personalism:

12. The Act of Social Justice 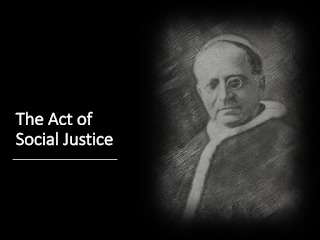 • Letters to Candidates.  Consider writing a letter to candidates running for national office to introduce them to the idea of the Just Third Way as a possible economic (and political) vision for this or any other country’s future.

We found the following item in The Emporia News (Emporia, Kansas) from August 25, 1881, page 2.  Read from a Just Third Way perspective, it graphically illustrates the economic, social, and political — and personal! — benefits of combining ownership of both capital and labor in the same people:

An eastern exchange, in an article relative to the future of the South, under the caption of “Glimpses of the New Dixie,” says: “The South of 1881 is in a transition state.  A new generation, not born under the curse of slavery, is coming into possession of its fields, its shops, and the avenues of trade and transportation.  Idleness, which was once thought the only honorable condition for white men, is more and more despised as unmanly.  The young men are not afraid of work, and many of them are achieving by the labor of their own hands and brains greater results than their fathers obtained from the unwilling toil of slaves.  At the same time the negroes, who were always workers, are acquiring the ownership of small farms, or where still only hired laborers are more settled and trustworthy than in the years following their emancipation.  A steady increase in the value of the staple crops of the south speaks well for its industrial* condition  Then there are the hopeful beginnings of new manufacturing enterprises to note, and a considerable increase of population, and a great improvement in the equipment of lines of travel, showing growth of business.  Altogether we must regard the appearance of the states south of the Potomac and the Ohio as very hopeful.  Their politics have not advanced as fast as their industry.*  They are still too  much under the control of confederate brigadiers who turned professional politicians after the war, and who have no ideas beyond keeping running for their own benefit the machinery of Bourbon Democracy.**  But there are encouraging signs of a breaking up of the crust of sectional feeling that has smothered free discussion and prevented the development of healthful antagonistic political organizations.  The new south will before long pull its politics out of the ruts of intolerance and ignorance.”

* In the sense of being industrious.

** A term current from 1872 to 1904.  A “Bourbon Democrat” was usually a Southerner and a member of the Democratic Party who held “conservative” political, fiscal, and social views (believe it or not, the Republicans were once the liberal party!), and were often quite open about keeping former slaves and their descendants in what was assumed to be their proper place, and keeping concentrated control over money and credit.  Woodrow Wilson was a Bourbon Democrat until the presidential campaign of 1912 when the populist William Jennings Bryan, the chief opponent of Bourbon Democracy throughout his career, threw his support to Wilson to defeat the progressive Theodore Roosevelt, since the Old Guard Republicans (who had become indistinguishable from the Bourbon Democrats) were backing William Howard Taft, and Wilson had to be distinguished from Taft to steal votes from Roosevelt and get the Black vote.  Once in office, Wilson reverted to his roots, tried to sabotage the Federal Reserve, and reinstituted racial segregation in the federal government.

Now, we know that matters developed a little differently than the article hoped.  We think, however, that the reason was not inherent racism, but the closing off of the opportunities and access to the means of becoming capital owners that occurred within a decade of when this article was published, as noted by Frederick Jackson Turner in his “Frontier Hypothesis.”  With the end of “free” land under the Homestead Act, economic opportunity in the form of access to ownership of both labor and capital dried up, and those at the bottom (especially racial minorities) tended to stay at the bottom.  We think that a new “Homestead Act,” such as the proposed Economic Democracy Act (formerly the Capital Homestead Act) that opens up democratic access to the opportunity and means to become owners of all forms of capital would go a longer way toward achieving a holistically just society than any amount of empty campaign rhetoric from vapid political candidates.

• Blog Readership.  We have had visitors from 32 different countries and 37 states and provinces in the United States and Canada to this blog over the past week. Most visitors are from the United States, Canada, India, the United Kingdom, and Australia.  The most popular postings this past week in descending order were “JTW Podcast: Communism, Part 8: Monsignor New Deal,” “A Philosophy of Law,” “A Judicial Pascal’s Wager,” “News from the Network, Vol. 13, No. 38,” and “Cultural Marxism.”