Trying to report news items that have nothing to do with the upcoming election and stick to our last of working to implement and maintain the Just Third Way of Economic Personalism can get a little difficult at times.  We think we’ve managed it again for this week, so if you’re wondering how to relegate politics to a minor annoyance and let people live their lives the way they think best within a just social order, read on:

• Federal Reserve Keeps Interest Rates Low.  In an incredibly expected moved, the Federal Reserve Board of Governors again voted to keep interest rates down to ensure that their buddies in government and on Wall Street don’t have to pay too much to keep buying votes and playing the market.  Of course, the idea that interest-free (but not cost-free) credit should be provided to turn displaced workers and everyone else into owners of advanced automated machinery via the Economic Democracy Act (formerly the Capital Homestead Act).  This would allow every child, woman, and man to be productive, bring basic industries back to the U.S. (or establish and maintain them in every country that wants to ensure its own basic needs are covered), restore a stable and asset-backed reserve currency, halt, even reverse environmental degradation, and quite a number of other things, too numerous to mention.  The Economic Empowerment Act is not a panacea, but it is a more just basis for an economy than the world has been saddled with for the past two centuries or so.

• Massive Income Shift. The Rand Corporation just released a study and people are expressing shock . . . shock . . . as in Louis-in-Casablanca’s “shocked to find that gambling is going on in here.”  Of course, the “shocking” finding is that median pay for working stiffs is around $50,000, while the non-wage income of the upper 1% has skyrocketed.  According to the study, if recent income gains had been distributed “equitably” (although the criteria for equitability are not evident), wage earners would be getting $109,000 median income.  Of course, no one is talking about how if wage workers were getting more than twice what they are now the price level would probably more than double, leaving wage workers worse off than before, but so what?  From a Just Third Way perspective, the solution is obvious: diminish the role of speculative stock market gains, and make people productive with both labor and capital so they can share equitably in gains on a rational and moral basis instead of hinting not-so-subtly that the greedy upper 1% should surrender their ill-gotten gains to the wage serfs.

• Economic Democracy v. the Wage System.  Economics experts throughout the world these days take for granted that the only way most people can have income is by being paid wages or given welfare.  This is “economic democracy” the way Walter Bagehot’s theories were political democracy.  According to Bagehot, democracy meant the rule of England and the British Empire by the wealthy commercial and industrial élite.  Everything else, such as the queen, House of Lords, religion, family, etc., were just for show, something to keep the masses in order and give them the illusion that they were somehow as good as the real people who were in charge.  Not surprisingly, Bagehot hated the United States for its egalitarian, personalism form of democracy.  As far as he was concerned, in English type democracy the aristocracy of wealth — “a chosen people” (Walter Bagehot, The English Constitution. Portland, Oregon: Sussex Academic Press, 1997, 17) — governed the lower classes for their own good, while the old aristocracy degenerated into useless and expensive anachronisms.  Not surprisingly, Bagehot despised America and its institutions, and greatly admired the totalitarian philosopher, Thomas Hobbes.  Bagehot’s economic and political theories had a great deal of influence on the work of John Maynard Keynes.

• World Day of Prayer for the Care of Creation.  On September 1, 2020, Pope Francis delivered his message for the care of creation.  It is a short document, relatively easy to get through . . . but somewhat disappointing.  There is nothing actually wrong with what the document says.  The problem is more with what is not said.  The message seems to be that if people just do what was right, the world would be a much better place.  This is almost — but not quite — what the socialists and modernists have called “the Kingdom of God on Earth.”  There are a few hints that could be taken as alluding to what Pius XI proposed as an acceptable alternative to the Kingdom of God on Earth, namely, the Reign of Christ the King (which is not of this world, as anyone familiar with the New Testament can tell you), but it’s very muffled.  What seems to be missing is the whole point of the natural law social teachings of the Catholic Church for the past 200 years: that the purpose of life is to become more fully human to prepare for your final end, whatever it might be; life is not an end in itself, or “anything goes.”  This applies to all faiths and philosophies.

• What is “Infallibility”? This isn’t getting beyond our book here, as many people — even (or especially) Catholics — misunderstand this whole “papal infallibility” thing.  The fact is many people have no real idea what it means.  “The Infallibility of the Teaching Office of the Roman Pontiff” (renamed that way to try and avoid people thinking the pope is infallible as a human being or in everything he does as pope) was formally defined in the First Vatican Council for a very good reason.  It was in order to (hold your breath) limit some very exaggerated notions people had put on the power of the pope, notably that of Félicité de Lamennais and his “theory of certitude” that (simplified) meant that the pope speaks infallibly every time he opens his mouth, and reason resides only in the collective and must therefore be interpreted by the pope. No, even when the science is theology, the pope does not and cannot speak infallibly as pope on anything other than faith and morals, very narrowly defined. Nor does it mean that people can understand infallibly; private interpretation of papal teachings is not usually a good idea if you fail to correlate it with common sense (which is why the primacy of reason was defined along with papal infallibility in the Council) or apply it to something to which it does not apply, e.g., economics or politics. The pope can also err in how he states even an infallible teaching if it leads to misunderstanding, and of course in applying it; the pope is defined as an infallible teacher in faith and morals, not an “impeccable” practitioner, in which he is like the rest of us. 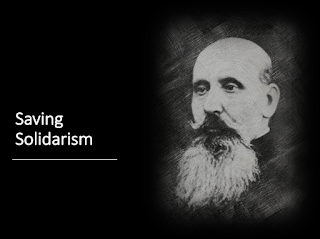 • Sensus Fidelium Videos, Update.  We now have a total of eleven videos of a projected sixteen — the latest being “Saving Solidarism” — we’ve been doing with the “Sensus Fidelium” YouTube channel.  They seem to be proving popular, with more than 22,000 views to date.  They aren’t really “Just Third Way videos,” but they do incorporate a Just Third Way perspective.  You can access the playlist for the entire series by clicking on the link: “Socialism, Modernism, and the New Age.”  The point of the videos is to explain how socialism and socialist assumptions got such a stranglehold on the understanding of the role of the State and thus the interpretation of Catholic social teaching, and even the way non-Catholics and even non-Christians understand the roles of Church, State, and Family, and the human person’s place in society.

• Blog Readership.  We have had visitors from 40 different countries and 42 states and provinces in the United States and Canada to this blog over the past week. Most visitors are from the United States, Canada, Spain, the United Kingdom, and Australia.  The most popular postings this past week in descending order were “JTW Podcast: The Crucifixion of Fulton Sheen,” “News from the Network, Vol. 13, No. 37,” “The Economic Dilemma,” “Cultural Marxism?” and “Is Industrialization Evil?”