As we saw in the previous posting on this subject, there appears to be a bit of a bruhaha (but no one is laughing . . .) following the death of Ruth Bader Ginsberg and a possible successor.  In an age focused on mindless prejudice to the point of obsession, it’s interesting that the objections to the possibility of a practicing Catholic being appointed to the United States Supreme Court seem virtually unchanged from the rhetoric of a number of fringe groups from the late 1700s down to the 1950s.

As an semi-fun exercise, substitute any “minority” of your choice or even a random selection into the comments made about Judge Amy Coney Barrett of the United States Seventh Circuit Court, add an issue or attitude presumably characteristic of that “minority,” and prepare to be appalled at the naked bigotry thereby revealed.

For example, take the following quote from Diane Feinstein, commenting on Barret’s appointment a few years ago:

Now let us suppose Barrett is from Mars, Mars having recently been declared the 53rd state, right after the District of Columbia and the Commonwealth of Puerto Rico.  Here’s Feinstein’s complaint translated into that context:

“Why is it that so many of us on this planet have this very uncomfortable feeling that Martian culture and Terran interests are two different things, and I think whatever a planet is, it has its own culture. A planet’s interests are totally different,” [Diane] Feinstein said.

“And I think in your case, professor, when you read your speeches, the conclusion one draws is that the Martian culture lives loudly within you. And that’s of concern.”

Now, what we find particularly intriguing about Barrett is the fact that she is a justice of the Seventh Circuit Court and is accused of letting “Catholic” (actually natural law) principles influence her decisions . . . as if it is somehow a virtue for a judge to hand down a decision based on something he or she believes to be unjust.  What Feinstein and others are actually afraid of is that Barrett as a judge will use the court to legislate rather than enforce the law . . . which is precisely what those who are “on this side” (as Feinstein put it) have been doing since at least 1857 and Scott v. Sandford, the Dred Scott case, that changed how the U.S. Constitution was interpreted by the Supreme Court.

Frankly, even if — horror of horrors — Barrett were to be appointed to the Court and — oh, terror! — even if a majority of the justices overturned Roe v. Wade or any other decision, it wouldn’t make a bit of difference.  Why?  Because as legislators have (almost) always known, and as Albert Venn Dicey pointed out in Lectures on the Relation Between Law and Public Opinion in England During the Nineteenth Century (1905), unless “public opinion” — the real thing, not what the polls tell us or politicians want to believe — goes along with, and supports a law in the way intended, what happens is disaster, or at least something very surreal.

For example, the Fugitive Slave Act of 1850 and the Volstead Act of 1919 (“Prohibition”) were the two most disobeyed laws in U.S. history.  Why?  Because a lot of people simply didn’t agree with them or accept them.  “Public opinion” was against the laws, and people had the power to disobey them. 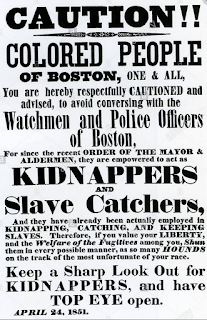 Technically, Roe v. Wade forces no one to have an abortion, any more than Obergefell v. Hodges forces a man to marry a man, or a woman to marry a woman.  Various politicians have arranged matters so that people who find abortion morally repugnant are forced to pay for it with their tax dollars, and people opposed to “gay marriage” are forced to go along with something that they personally find objectionable, but those — while obvious injustices — are another issue.  It is interesting, however, how quickly a rather reasonable request for toleration almost instantly becomes a demand that others not merely tolerate, but actively support (financially and otherwise) behavior that they find horrifying.

Now we’re getting into something that will (to put it mildly) annoy the pro-life movement.  That is, even more than what we just said about the uselessness of overturning Roe v. Wade . . . which is the wrong case to go after, anyway.  As we’re argued before, the case that needs to be overturned is the one that set in stone the precedent for judicial activism, the Slaughterhouse Cases of 1873.

And what will annoy people in the pro-life movement more than the fact that their cherished goal is almost completely ephemeral?  Pointing out that they’re completely missing the real goal of a total pro-life movement: to empower people with control over their own lives.  Once people have power over their own lives, we predict that abortion and same-sex marriage and a number of other things will fall of their own dead weight in a generation.

We’ll even make a “Pascal’s Wager” on this.  Empowerment is good for everyone, pro-life or pro-choice, so make the experiment.  Institute an effective program that would empower every child, woman, and man and see if abortion, etc., is still around in a generation.  If we’re wrong, we’re no worse off than now in one respect, and enormously better off by gaining power over our own lives.  If we’re right, people who want abortion, etc., will have the power to do it, but without forcing others to pay for it against their will.  They, too, stand to lose nothing.

And what do we find so interesting about the fact that Barrett is a judge on the Seventh Circuit Court?  We’ll look at that in the next posting on this subject.