A Philosophy of Law

With the death of Supreme Court Justice Ruth Bader Ginsberg, speculation has shifted into high gear as conservatives push for what they think will be a conservative justice, and liberals for a, er, liberal justice.  That’s a little simplistic, but it’s the view most people have of the situation.  The problem is that it’s a little bit more complicated than that.

In the Catholic World Report, for example, there is an article describing the frenzy that accompanied the appointment of Amy Coney Barrett’s appointment in 2017 to the United States Seventh Circuit Court in Chicago.  The hearings rapidly devolved into an exercise in paranoia that the United States would be subverted by the forces of rum, Romanism, and rebellion through the sinister intrusion of Catholic dogma into the judicial process.

This was the subject of the article, “‘Dogma  Lives Loudly in You’ — Amy Coney Barret’s 2017 Confirmation Hearing” in Catholic World Report.  As stated in the article,

The problem is actually a bit deeper than that.

The issue is not “dogma” versus “law,” but the philosophy of law to which one adheres.   As the solidarist jurist Heinrich Rommen noted in his book on the natural law, there are two basic philosophies of jurisprudence, depending on one’s view of the human person, which in turn is based on the form of “liberal democracy” one follows.

The Aristotelian-Thomist understanding of natural law, lex ratio (law is reason), assumes as a given that right and wrong are determined by human nature, whether or not one accepts that God created man.  In this view, each human person is sovereign and has certain inherent (inalienable) rights that are an integral part of human nature, particularly the rights to life, liberty (freedom of association), and private property.

While the exercise of life, liberty, and private property is necessarily limited and socially determined (man being by nature a “political animal”), the rights themselves are absolute as part of human nature, hence, “natural law.”  These rights may never justly be violated.

People delegate certain rights to the collective and allow the exercise of others to be defined, but the source of rights remains the human person.  This is the basis of American type liberal democracy as embodied in the Declaration of Independence and the Constitution.

The “Ockhamist” or Grotian understanding of natural law, lex voluntas (law is will) that right and wrong are based on the command of something or someone accepted as a Supreme Being, as Rommen pointed out, ultimately means that “might makes right.”  The collective or an élite is sovereign, not each human person. 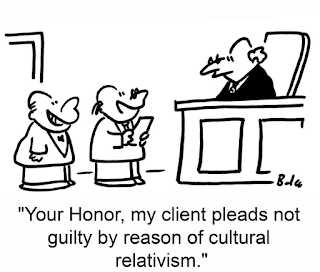 In this understanding of natural law, there is no such thing as an inalienable right of human persons, only of humanity as a whole.  This is because all rights come from “the people” or are handed down from an economic or political élite.

Based on a distortion of Duns Scotus’s thought combined with a form of neo-Platonism, lex voluntas leads inevitably to pure moral positivism and finally nihilism.  Essentially, in this view of the law, anything goes as long as you can get enough people to go along with it.

“The People” or an élite is the source of rights, which are doled out to actual human beings as deemed expedient or necessary, thus an abstraction created by human beings takes precedence over human beings created by God.  As Fulton Sheen noted in his doctoral thesis, “God and Intelligence,” the natural order is turned upside-down, collective man is at the top, human beings are in the middle, and God is at the bottom, the servant of man.

This is the basis of English type liberal democracy in which an élite is sovereign and leads to capitalism, and European type liberal democracy in which the collective is sovereign and leads to socialism.  These usually start to drift towards one another to form what Hilaire Belloc called “the Servile State,” although not quite in the form he envisioned.

Whether one accepts lex ratio or lex voluntas determines one’s view of the U.S. Constitution and the meaning of “rule of law.”  Under lex ratio, the Constitution is a grant of rights from the people to the State, and the courts may not make law, only interpret it in light of the Constitution.  This is “original intent.”

Under lex voluntas, the Constitution is a grant of rights from the State to people, and the courts may make law any time they like simply by forcing people to go along with something and having the power to do it.  This is “the living Constitution.”  Ultimately, the only thing that matters is the will or even whim of the court.

It thus makes perfect sense under the theory of the living Constitution to impose a religious test for public office and to claim that “right” and “wrong” mean different things, depending on circumstances.  This is because moral positivism is simply a way of saying might makes right, and minorities who are not strong enough or that do not have the right views must either remain silent or be eliminated, whichever is most expedient.

The real issue, therefore, is not the hidden or explicit anti-Catholic or anti-religious bias of elected officials or the courts, but whether their view of the Constitution and the role of the State is consistent with the vision of the founders of the United States.