How Everyone Can Win in November, Part II

Imagine, if you will, a scene in the White House within a few hours of Joe Biden announcing that he is dropping his support for government funding of abortion, as suggested in the previous posting on this subject.  There is (as you might imagine) a great deal of consternation and wringing of hands. 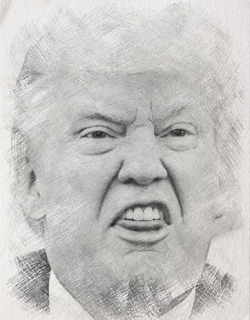 “What are we going to do?” wails one White House wight. “Biden will now get the pro-life vote!  They know that not even you can abolish abortion on demand unilaterally, and they’ll take this as a great victory!  And, frankly, Chief, you’ve ticked off a lot of people!”

“Whoa, there, cowboy,” says another compadre.  “We can’t just ignore this.  We have to come up with something to top it.  You’ve campaigned as the pro-life champion.  If he steals your thunder, you’ll just be a flash in the pan!”

“For mixing metaphors, or for saying you need a new vision?” asks another anguished associate.  “Face it, Chief, if you don’t come up with something new, Biden will be getting hailed to in January.”

“I have an idea,” says one brave soul.  “One that will snatch the pro-life vote away from Biden, and leave him hanging out to dry.  It will also make America and the rest of the world greater than it’s ever been.”

Looking around at the decimated group in the Oval Office, President Trump starts to say, “You’re fi . . . Lay it on me, Dude.”

“Sure thing, Chief,” says the Brave Soul.  “Look, even if Biden stops all government funding of abortion, sure it will be a great victory for everybody . . . but it doesn’t really do anything to stop it, not really.  It leaves the underlying problem in place, right?  Neither we nor the Democrats have really addressed the underlying problem.”

“Which is?” Trump prompts after the Brave Soul’s dramatic pause.

“Lack of power,” says the Brave Soul.  “I mean, look.  How many people really want to have abortions?  Except for some ideologues who aren’t quite screwed on too tight anyway, people get abortions because they feel powerless to do anything else.”

“I like what I’m hearing,” says Trump.  “I find myself strangely fascinated.  Tell me more.”

“Which you won’t be able to do once I have power, right Chief?” the Brave Soul grins.  “The question then becomes how to get power to the people.”

“So is everybody else,” he adds magnanimously.  “Continue.”

“Recall that Daniel Webster said that ‘power naturally and necessarily follows property’,” says the Brave Soul.  Anticipating any questions, he continues, “Webster was, as you know, a nineteenth century America statesman.” 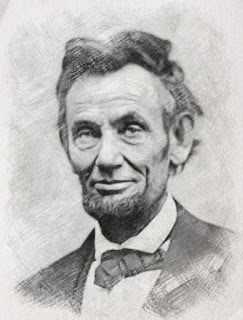 “Now,” the Brave Soul goes on, “who was one of America’s greatest presidents?”

Trump thinks a while.

“This isn’t Jeopardy, Chief,” the Brave Soul says, “but yes, Lincoln.  In 1862 his Homestead Act resulted in thousands of people gaining ownership of capital in the form of land, without having to put up any purchase money except for the $6 filing fee.”

“But wasn’t the land taken from the Native Americans?” asks one un-fired associate.  “And isn’t the amount of land limited?”

“In many cases and absolutely, respectively,” agrees the Brave Soul.  “It wasn’t perfect by any means, but it was still the single greatest economic initiative that we know of in the history of the world.  It turned the United States from a relative backwater country supplying raw material to the British Empire — mostly cotton grown by slaves — to an industrial, commercial, and agricultural powerhouse that today is still the greatest economy in the world.”

“Run by wage slaves,” chimes in another Brave Soul.

“Exactly,” beams the first Brave Soul.  “And that is why we need a new Homestead Act and a new Emancipation Proclamation, all rolled into one, to make — and keep — America great again.”

“‘Make America Great Again’,” says Trump.  “I like that.  Somebody write it down.  We might be able to use it.”

“How can we do that?” asks the other Brave Soul.  “Redistribute Bill Gates’s and Warren Buffet’s stuff?” 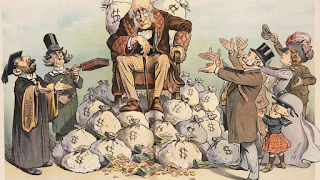 “Not necessary,” says the Brave Soul.  “If everybody in the country is allowed to purchase new capital that pays for itself out of its own future profits, anybody and everybody can become a capital owners without taking anything from anybody else.”

“You mean my stuff is safe?” says Trump, with obvious relief.

“You bet, Chief,” says the Brave Soul.  “Financing new capital formation that pays for itself doesn’t require either borrowing or re-distributing money from the rich, or taking away anything else they own right now.  It only requires that everybody be given access to the same opportunity and means that the rich have to finance new capital that they then own.”

“Yeah, but doesn’t that need collateral”? asks someone.  “You need money to make money, you know.”

“You sure do,” says the Brave Soul.  “But what is collateral?  It’s security for a loan, a guarantee that if the loan isn’t repaid, the lender will get his or her money back.  ‘Capital credit insurance’ can do the same thing.”

“Bu where’s the money to come from?” asks another.  “You said the rich don’t have to give up anything.”

“Well, they don’t have to give up their wealth,” admitted the Brave Soul, “but they do have to give up something: their current near-monopoly on ownership of future wealth.  As for the money, commercial and central banks were invented to create new money that repays itself by being put to productive use.  A bank of that type creates money for new capital, and when the new capital becomes productive, the loan is repaid and the money cancelled.”

“But what if the new capital isn’t productive?” insists the other.  “Isn’t that inflationary?”

“No,” says the Brave Soul.  “The insurance pays off the loan and that money is cancelled.  ‘Money’ is fungible, as long as the same amount of money is created and cancelled, there is neither inflation nor deflation, regardless where it came from.”

“What should we call this ‘capital homesteading’ program?” someone asks.

“Or we could just go with ‘Economic Democracy Act,” someone says.

Well, maybe it wouldn’t play out quite like that, but that’s beside the point.  The important thing here is that if Trump wants to trump (sorry) Biden’s ace of putting aside abortion, he’s got to have something (if you’ll excuse the expression) great — and that’s just what the Economic Democracy Act (formerly the Capital Homestead Act) could do.  By giving a way to turn every American into a capital owner, Trump could win in a landslide.

Now, to make certain we keep things fair, in the next posting on this subject, we’ll show how Biden and Trump can slug it out in a way that benefits everyone, including themselves, regardless who wins.