Why Have Core Values?

As a follow-up to the previous posting on this subject, we decided to look at the issue of why organizations such as CESJ — or any organization, for that matter — even have core values in the first place.  Obviously, the best place to start looking for an answer is CESJ itself.  Why does CESJ have core values?  Because —

Successful organizations start with people firmly committed to a set of core values, which cannot be compromised without weakening the organization. CESJ’s strength, unity and programs flow from our founding principles, agreed upon by consensus from our first meeting on April 7, 1984. Our core values were developed to guide us in our work, to attract others sharing these values and to serve as the very basis of CESJ’s existence.
As an organization open to all people, we think that our core values, once understood, are universally appealing. We see this reflected in the broad diversity of the backgrounds of those who come together because of these shared values. The essence of our founding principles has not changed from the founding of CESJ. But, as we discuss them together and with others, we will continue to refine and clarify our values by consensus.
That’s a good description of why CESJ has core values, but where does CESJ get off making the claim for all “successful organizations”?  Well, the first answer is “solidarity,” defined briefly as a characteristic of groups per se.
Of course, there’s more to it than that.  A lot of people have taken on “solidarity” as a popular buzz word, especially since the pivotal role played by the Solidarność (Solidarity) movement of the 1980s in Poland in ending Soviet rule, and the pontificate of Pope John Paul II (Karol Józef Wojtyła, 1920-2005, elected 1978).
It makes sense, then, to examine the role of solidarity in the thought of Karol Józef Wojtyła, in which the concept holds an important place.  As he would later state — putting the word in quotes — solidarity is a “virtue,” the habit of doing good, but not in the same sense as, e.g., justice and charity.  In his encyclical issued as pope on the twentieth anniversary of Populorum Progressio he explained that solidarity —
. . . is above all a question of interdependence, sensed as a system determining relationships in the contemporary world, in its economic, cultural, political and religious elements, and accepted as a moral category.  When interdependence becomes recognized in this way, the correlative response as a moral and social attitude, as a “virtue,” is solidarity. (Solicitudo Rei Socialis, § 38.) 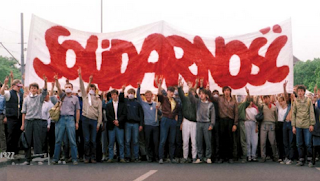 Specifically, solidarity is a principle that fulfills and completes that general justice which permeates all virtue, a sort of “general social charity.”  Solidarity, in fact, appears to relate to social charity as legal justice relates to social justice, viz, a general virtue as it relates to a particular virtue.  It is not a particular virtue (a virtue that is defined by a specific “act” directed at a specific “object”; a general virtue, unlike a particular virtue, does not have a defined, “particular” act or a direct object.), nor does it exclude non-Christians.
Solidarity is, of course, a virtue Christians necessarily have, but not one that is exclusive to Christians.  As Wojtyła noted, “Solidarity is undoubtedly a Christian virtue. In what has been said so far it has been possible to identify many points of contact between solidarity and charity, which is the distinguishing mark of Christ's disciples.” (Ibid., § 40.)
In the context of Wojtyła’s Thomistic personalism, then, solidarity describes an awareness of rights and duties within a particular group that define how sovereign individuals relate as persons to one another and to the group as a whole.  All people as members of a group have solidarity when they have that awareness and are able to participate fully as members of that group.
Solidarity in Wojtyła’s thought is an essential prerequisite for social justice, for (as we will see) only members of groups can carry out acts of social justice.  By this means cooperation is achieved, not by absorbing people into the group or collective, but by mutual interaction and give-and-take in exercising rights and attaining the common goals and aspirations of the group.
Solidarism as conceived by Wojtyła is thus in sharp contrast to that of, e.g., the sociologist David Émile Durkheim (1858-1917). Durkheim, whose conception of God was a “divinized society” (Fulton J. Sheen, Religion Without God.  New York: Garden City Books, 1954, 54), held that only the collective has rights.  Individual ethics are merely expedient and necessarily give way before the demands of social ethics.  As Joseph Alois Schumpeter (1883-1950) put it, for Durkheim, “religion is the group’s worship of itself.” (Joseph A. Schumpeter, History of Economic Analysis.  New York: Oxford University Press, 1954, 794.)
So, clearly it is important to have solidarity, properly understood.  And as to why every organization needs the core values around which solidarity is built, there are at least seven reasons (probably more) as to why organizations need to identify and live out the core values of that organization.  Specifically,
·      They determine organizational characteristics. What makes that particular organization distinct from all other organizations? What differentiates it? One way to do this is with a set of core values.
·      They dictate personal involvement and alignment. When an organization takes on people, it wants them to be in alignment with its values. People can always be trained in skills, but they must be in alignment with the organization’s core values.
·      They communicate what is important. What’s important to the organization can be clarified in the values for everyone to see for people inside and outside the organization.
·      They influence overall behavior. Core values influence how people act.
·      They inspire people to action. People take positive action because they aspire to live up to those core values.
·      They contribute to the overall success of the organization.
·      They shape the organizational culture.
We will start to examine CESJ Core Values point by point in the next posting on this subject.
#30#