At the top of the news this week is the Corona virus, but we don’t know better than anyone else what has happened, what could happen, or what will happen, so we’ll stick with other stories until we do know:


• High Times.  If you have been having high times a little too often (so to speak), you might want to be a little on guard.  It seems there’s a little warning that is not appearing on your packet of weed.  It seems that “Cannabinoid Hyperemesis Syndrome, or CHS, causes severe abdominal pain, nausea and “cyclic vomiting” among regular marijuana users — and can lead to extreme dehydration and, in rare cases, death.”  Of course, whether anyone smoking the stuff really cares about any of this is something of a moot point, but less dangerous side effects have been known to get something banned.  Ever hear of cyclamates?  Laboratory rats were fed such enormous quantities of the chemical that it might have killed them anyway, but the doses were thousands of times greater than any human being could consume.  Then there was the hysteria about nitrates . . . you know, the stuff that preserves bacon and hot dogs?  Even Julia Child weighed in on that one, noting that a human being would have to eat several times his or her own weight of hotdogs each day (which itself would kill you) before getting anywhere near the danger level.

• Encouraging the Rich.  Some people are up in arms over Jeff Bezos purchasing the most expensive piece of real estate in Hollywood for much less than a percentage point of his net worth.  This is wrong-headed.  The criticism, that is.  We should encourage the rich to spend their income instead of reinvesting it.  When the rich spend their income on consumption, they create jobs and spread it around.  When they reinvest it, they make themselves richer.  But if the rich don’t reinvest their wealth, how are we supposed to finance economic growth?  That’s a two-part answer: 1) The increased consumer demand resulting from the rich spending their income instead of saving/reinvesting it increases the demand for new capital, and thus new ownership opportunities. 2) If the financing for the new capital comes out of future savings (future profits of the capital itself) instead of past savings, then everyone can take advantage of the new opportunities for capital ownership, not to mention refraining from cutting consumption also keeps demand up.  However you look at it, consumption by the rich is a good thing, not something to protest. 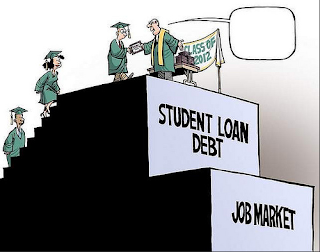 • Student Debt.  The forgive-student-debt movement has been gaining momentum, although a few voices are being raised about the possible dangers such a massive debt forgiveness might have on the economy, as well as on Academia itself.  We’re not aware of anyone who holds student loan debt as investments, but even if it is “the corporations,” those corporations have shareholders, and the shares are often traded on the exchanges.  According to Forbes, there is total outstanding student loan debt of approximately $1.5 trillion in the U.S.  The question is, if that debt is forgiven, who pays?  One unforeseen problem: the IRS includes forgiveness of debt as income . . . fully taxable income.  Can a former student with $250,000 of outstanding loans afford a sudden addition of non-cash income of that much?  At a 30% tax rate, the taxes due — and due at the time the debt is forgiven — is $75,000.  You can get into big trouble if you default on student loans, but you won’t go to jail unless you disobey court orders about rescheduling, etc.  You can go to jail for not paying your taxes.  And what about the value of the shares of the companies holding non-government student debt?  The taxpayer is going to get stuck for that.  The government cannot order a private company to forgive debt without compensating the company.  And the debt held by state and federal government?  The taxpayer gets stuck for that, too.  At one stroke, over $1 trillion could be added to the deficit.  And that probably means the full hit of $1.5 trillion would be assumed by the federal government since no state could take that kind of write off.  Now, about that “free tuition” movement . . . in Europe, all that has meant is that other charges to the students go up.  The total cost remains about the same and in some cases actually increases.  The problem doesn’t go away.  It gets worse. And we haven't even mentioned the "jobs market," an interesting concept in and of itself. . . .
• Shop online and support CESJ’s work! Did you know that by making your purchases through the Amazon Smile program, Amazon will make a contribution to CESJ? Here’s how: First, go to https://smile.amazon.com/.  Next, sign in to your Amazon account.  (If you don’t have an account with Amazon, you can create one by clicking on the tiny little link below the “Sign in using our secure server” button.)  Once you have signed into your account, you need to select CESJ as your charity — and you have to be careful to do it exactly this way: in the space provided for “Or select your own charitable organization” type “Center for Economic and Social Justice Arlington.”  If you type anything else, you will either get no results or more than you want to sift through.  Once you’ve typed (or copied and pasted) “Center for Economic and Social Justice Arlington” into the space provided, hit “Select” — and you will be taken to the Amazon shopping site, all ready to go.
• Blog Readership.  We have had visitors from 29 different countries and 39 states and provinces in the United States and Canada to this blog over the past week. Most visitors are from the United States, Canada, the Philippines, India, and Spain.  The most popular postings this past week in descending order were “Social Justice IV: The Characteristics of Social Justice,” “Thomas Hobbes on Private Property,” “The Purpose of Production,” “News from the Network, Vol. 13, No. 6,” and “Religion and All That.”
Those are the happenings for this week, at least those that we know about.  If you have an accomplishment that you think should be listed, send us a note about it at mgreaney [at] cesj [dot] org, and we’ll see that it gets into the next “issue.”  Due to imprudent language on the part of some commentators, we removed temptation and disabled comments.
#30#