Modern politics is a wonder . . . you wonder why no one running for office has picked up on the obvious advantages of adopting the Just Third Way of economic personalism as a main plank of a platform.  That being said:


• Saving Social Security.  This past Sunday former New York City mayor Michael Bloomberg announced his plan to save Social Security and revamp America’s retirement system.  Part of the billionaire contender’s proposal is to raise the minimum benefit to above the poverty line.  Which poverty line does not appear to have been specified, nor the effect of increasing demand without a corresponding increase in production, but doubtless these details will be revealed in the future.  Bloomberg is “consider[ing] options for preserving and strengthening Social Security’s long-term finances, while maintaining and enhancing benefits for the neediest recipients.”  His plan includes a “supplement” to lower-income retirement options with a public savings option with automatic contributions for all income earners.  Unfortunately, Bloomberg was a trifle vague about funding the increased benefits.  He does not appear to have considered something along the lines of Capital Homesteading, which would help people meet their needs through their own efforts instead of relying on redistribution or cutting current consumption to save for retirement.  (This item was obviously written prior to the debates on Wednesday night and might be moot at this point. . . .)

• Congress and Widespread Ownership.  According to the monthly bulletin of the National Center for Employee Ownership in Oakland, California, Congress is getting ready to discuss implementation of the “Mainstreet Employee Ownership Act” and its regulation.  As the background memo stated, “Congress’[s] charge to ensure the federal agencies who deliver capital access programs do not discriminate against certain business[es] based solely on their ownership structure. Because these businesses have been proven to be a net positive on local economies and creating real wage growth for workers, it is incumbent upon Congress and the federal agencies it oversees to make it easier, not harder, for businesses to operate in an employee-owned model.”  Next step logically would be a Capital Homestead Act. 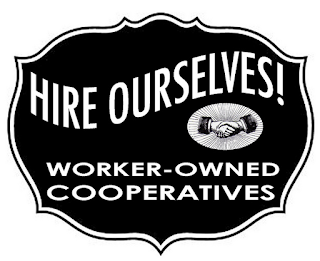 • State of the Cooperative Report.  Also according to the NCEO, in January the U.S. Federation of Worker Cooperatives and the Democracy at Work Institute issued an annual report on the state of worker cooperatives in the United States.  There are 465 (known) worker cooperatives.  They employ 6,454 people with annual revenue of about $505 million.  They are scattered throughout the country, with  most of them being in the San Francisco Bay Area, the corridor from Washington, D.C. to Boston, and Puerto Rico.  Most were founded as start-ups.  A quarter of known worker coops, however, converted to the cooperative form from other business organizations. 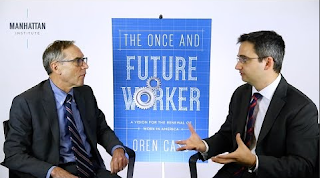 • American Compass.  A new think tank is forming that — although being described by some as “anti-free market” — is simply saying that the free market is not an end in and of itself.  “American Compass” is an initiative of Oren Cass (formerly of the Manhattan Institute and author of The Once and Future Worker (2018), is being launched in May of this year.  The new organization will strive “to embody the principles and practices of a healthy democratic polity, combining intellectual combat with personal civility. [They] welcome converts to [their] vision and value disagreement amongst [their] members. [They] work toward a version of American politics that remains inevitably partisan and contentious but operates from a common commitment to reinforcing the foundations of a healthy society.”  Viewing the website and the description of Cass’s book, it appears that they are not familiar with either the work of Louis Kelso and Mortimer Adler, or the Just Third Way, which have the potential to address the problems they cite.  Everything seems geared toward improving the wage system instead of going beyond it to an ownership system.
• Interfaith Dialogue.  In response to a question about the role of natural law in faiths and philosophies other than those adhering to the Abrahamic tradition and Aristotelian philosophy, we gave this response: “All faiths and philosophies have some idea of natural law. The differences come in how it is discerned and how it is interpreted. Most will agree on fundamental principles. Genuine interfaith dialogue generally consists of reconciling semantic issues on natural law, not debating purely religious matters based on faith. CESJ’s framework for interpretation is Aristotelian-Thomist, but that does not invalidate others.”  To this one individual responded, “Thanks, this is the simplest and most coherent description of ‘interfaith dialogue’ I’ve seen.”
• Shop online and support CESJ’s work! Did you know that by making your purchases through the Amazon Smile program, Amazon will make a contribution to CESJ? Here’s how: First, go to https://smile.amazon.com/.  Next, sign in to your Amazon account.  (If you don’t have an account with Amazon, you can create one by clicking on the tiny little link below the “Sign in using our secure server” button.)  Once you have signed into your account, you need to select CESJ as your charity — and you have to be careful to do it exactly this way: in the space provided for “Or select your own charitable organization” type “Center for Economic and Social Justice Arlington.”  If you type anything else, you will either get no results or more than you want to sift through.  Once you’ve typed (or copied and pasted) “Center for Economic and Social Justice Arlington” into the space provided, hit “Select” — and you will be taken to the Amazon shopping site, all ready to go.
• Blog Readership.  We have had visitors from 35 different countries and 37 states and provinces in the United States and Canada to this blog over the past week. Most visitors are from the United States, India, the United Kingdom, Spain, and Canada.  The most popular postings this past week in descending order were “Social Justice IV: The Characteristics of Social Justice,” “Thomas Hobbes on Private Property,” “News from the Network, Vol. 13, No. 3,”  “The Green Economy,” and “News from the Network, Vol. 13, No. 7.”
Those are the happenings for this week, at least those that we know about.  If you have an accomplishment that you think should be listed, send us a note about it at mgreaney [at] cesj [dot] org, and we’ll see that it gets into the next “issue.”  Due to imprudent language on the part of some commentators, we removed temptation and disabled comments.
Just to see if you read this far, here's a video treat for you.  It's less than five minutes.
#30#