All eyes today are on the stock markets of the world instead of the productive, primary markets.  We’ll give in to popular pressure and explain why this is a bad idea, but that’s as far as we’ll go: 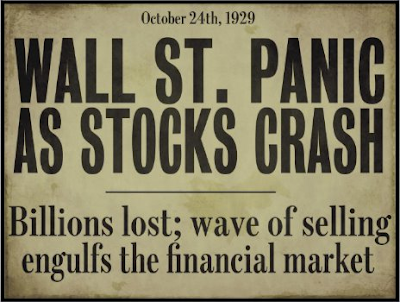 • The Downer Dow.  Just in case you’re starting to panic (as of this writing the Dow has gone down by nearly 1,000 . . . so far), it might be good to keep one or two things in mind.  One, the stock exchanges of the world are what is known as “secondary markets,” essentially secondhand shops (or “shoppes”, if you prefer Ye Fake Olde Englishe yt is actually deliberately archaic Jacobean) for used debt and equity.  Stock exchanges produce nothing.  They are clearinghouses where people who want to sell financial instruments meet other people who want to buy financial instruments.  Everything else being equal (the economists’ favorite copout), it doesn’t matter who or what owns the “underlying” (financial language for the asset the financial instruments represent) as long as it, a, exists, and, b, is productive.  Yeah, yeah, yeah, we know that “everything else” is NOT equal; for example, recent analyses by the European Investment Bank have found that on the average SOEs (“State-Owned Enterprises”) have ROIs (“Returns On Investment”) approximately half that of privately owned businesses, and that — according to the National Center for Employee Ownership (NCEO) in Oakland, California — 100% worker-owned companies with participatory management and profit sharing typically outperform otherwise comparable firms by 150%.  (Translation: privatize SOEs by selling them to the workers and instituting Justice-Based ManagementSM and you can expect a 300% increase in ROI.)  Two, the Crash of 1929 did not cause the Great Depression of 1930-1940.  It was, rather, a trigger that revealed serious weaknesses in the U.S. financial system, such as combining investment and commercial banking and the lack of adequate collateral for business loans.  With commercial banks creating money willy-nilly for stock market speculation, when the bubble burst they stopped all un- or inadequately collateralized lending, even to otherwise sound businesses . . . which immediately became unsound when they could no longer obtain credit and loans were called.  Businesses that a short time before had been blue chip companies were forced to lay off workers or even went bankrupt.  With the repeal of Glass-Steagall and the obsession with the stock market today, the primary, productive market is already in trouble and has been for some time.  Instead of bailing out Wall Street, then (as we predict people will start demanding), there should be a focus on repairing Main Street, with something like Capital Homesteading.
• Slavery and Socialism.  Talk about grasping at straws.  In today’s Wall Street Journal there was a letter to the editor from an academic carefully explaining that “Slavery Was a Dystopic Form of Socialism” (WSJ 02/28/20, A-3).  Uh, yeah, uh, Kingfish.  Socialism being defined succinctly (if not entirely clearly when people in general don’t understand property) as “the abolition of private property,” it is difficult to figure out how extending private property to the right to own other human beings — an exaggeration of private property to the point of criminality — is the same as the abolition of private property!  We’re reminded of the capitalist and the socialist who defined “distributism.”  The former declared that what G.K. Chesterton meant by distributism is what he (the capitalist) meant by “democratic capitalism,” while the latter asserted that what G.K. Chesterton meant by distributism is what he (the socialist) meant by “democratic socialism”!  Capitalism and socialism are the same thing!!  Of course, from a Just Third Way perspective the whole discussion is nonsense, as this comparison matrix reveals.
• Ukraine Privatization.  The rather gloomy picture of the Ukrainian economy painted by the International Monetary Fund is actually a golden opportunity for the country.  Ukraine is faced with privatizing 1,500 SOEs, but with only the usual suspects — rich domestic investors and rich foreign investors — as potential buyers.  What they should do — according to the late Walter Reuther, president of the United Auto Workers union — is to sell existing SOEs to the workers and keep fixed costs low by taking future increases out of profits instead of adding to costs.  For future growth, institute a Capital Homesteading program to make every Ukrainian an owner.
• Shop online and support CESJ’s work! Did you know that by making your purchases through the Amazon Smile program, Amazon will make a contribution to CESJ? Here’s how: First, go to https://smile.amazon.com/.  Next, sign in to your Amazon account.  (If you don’t have an account with Amazon, you can create one by clicking on the tiny little link below the “Sign in using our secure server” button.)  Once you have signed into your account, you need to select CESJ as your charity — and you have to be careful to do it exactly this way: in the space provided for “Or select your own charitable organization” type “Center for Economic and Social Justice Arlington.”  If you type anything else, you will either get no results or more than you want to sift through.  Once you’ve typed (or copied and pasted) “Center for Economic and Social Justice Arlington” into the space provided, hit “Select” — and you will be taken to the Amazon shopping site, all ready to go.
• Blog Readership.  We have had visitors from 34 different countries and 46 states and provinces in the United States and Canada to this blog over the past week. Most visitors are from the United States, Canada, the United Kingdom, Spain, and the Philippines.  The most popular postings this past week in descending order were “Fulton Sheen on ‘the New Christianity’,” “Philosophies at War,” “Stewardship,” “News from the Network, Vol. 13, No. 8,” and “Social Justice IV: The Characteristics of Social Justice.”
Those are the happenings for this week, at least those that we know about.  If you have an accomplishment that you think should be listed, send us a note about it at mgreaney [at] cesj [dot] org, and we’ll see that it gets into the next “issue.”  Due to imprudent language on the part of some commentators, we removed temptation and disabled comments.
#30#