The media are still clogged with politics and religion, which means that important items that have some bearing on the Just Third Way get short shrift.  Since we haven’t been getting too many news items from our faithful readers (that are fit to print, anyway), we have managed only a few short but important items this week:


• Death of Cardinal Silvestrini.  CESJ was saddened to learn of the death of Achille Cardinal Silvestrini  (1923-2019) of brain cancer on August 29 of this year.  His Eminence served as Vatican Secretary of State for Internal Affairs and Prefect of the Congregation for the Oriental Churches under Pope Saint John Paul II.  He was instrumental in arranging CESJ’s two audiences with John Paul II, and hosted CESJ’s 1992 seminar at the Vatican on the role of private property in capital in combating global poverty.  He invited the entire CESJ delegation to his villa for a tea following the conclusion of the seminar for heads of religious orders.  The seminar led to the publication of CESJ’s “small press bestseller” Curing World Poverty: The New Role of Property (1994), free e-copies of which are available on the CESJ website.  CESJ is currently exploring the possibility of offering a facsimili of the first edition print on demand.
• Article Newman.  Dr. Robert A. Gervasi, President of Ohio Dominican University in Columbus, Ohio, has published an article on the upcoming canonization of John Henry Cardinal Newman.  The article, “The Idea of a University,” appeared in the September 8, 2019 issue of The Catholic Times, “The Diocese of Columbus’ News Source.”  In addition to explaining a little about Newman’s importance (necessarily very little, as conveying the true import of Newman and his career is virtually impossible in a one-page article, even one with small print), the article points out a small problem in Catholic Academia, that also seems to afflict other Catholic institutions including parishes and social clubs (and which we suspect other denominations and organizations deal with as well): the belief that anyone who deviates from a particular party line, or even fails to express sufficient enthusiasm for the party line, is not a Real Catholic™.  Self-appointed inquisitors on both sides of the socio-political aisle somewhat misleading labeled “liberal” and “conservative” are fond of making lists or declarations that, e.g., “90% — or even 99.9999999999999% — of ‘Catholic’ (‘people’ who ‘disagree’ with ‘you’ are ‘always’ put in ‘quotes’) Colleges and Universities Are No Longer Catholic, and What’s More Never Were.”  Somewhere along the way the question of whether or not something is true got misplaced. 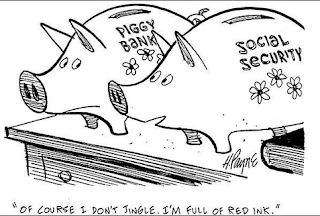 • Social Security Reform.  Yet another proposal has surfaced for reform of the Social Security system to prevent bankruptcy as projected in fifteen years.  As usual, the real problem is not addressed: the lack of productive capacity other than by labor on the part of many Americans.  The system is only tweaked, not really reformed, viz. raising the age to receive full benefits so that people can work longer.  This, however, fails to address the fact that most production of marketable goods and services is not the result of labor, but of capital, and the situation is only getting worse as technology advances.  For example, if a machine can do ten times the work of a human being, the human being still can’t compete if he works twice as hard; the human being is then 20% as efficient as the machine instead of just 10%.  Then consider the fact that most machinery is not merely ten times more productive than a human being, but thousands of times more productive.  Making people work 45 years instead of 40 is not going to fix matters.  The only solution, as Louis Kelso pointed out more than half a century ago, is for as many as possible of the people to own capital, supplementing and in some cases replacing labor as the factor they contribute to production.  One such proposal is Capital Homesteading.
• Hong Kong Mask Law.  Authorities in Hong Kong are reactivating an old British colonial law that outlaws wearing masks in public in an effort to stop protestors from wearing gas masks.  When protestors wear gas masks, it inhibits the effectiveness of tear gas in dispersing crowds and interferes with facial recognition for future prosecution.  No word has been received on whether the Hong Kong police will be prosecuted for shooting live ammunition at protestors or whether the mainland government will be indicted for its human rights violations, particularly Article 17 of the United Nations’ Universal Declaration of Human Rights (which it signed and played a key role in writing) that states every person has the right to own private property, individually or in free association with others.
• Pot Goes to Pot.  Like, totally bogus, Dude.  It seems, like, you know, uh, what were we talking about?  Got any M&Ms?  Oh, yeah.  It seems like Constellation Brands, Inc., took such a hit (in a bad trip kind of way) on their investment on cannabis-based products that they’re trying to make up the losses by pushing alcoholic seltzer water.  Evidently Constellation and the rest of the boozy fizz-water market that is temporarily in the ascendant over beer learned nothing from Coors’ Zima fiasco.  Evidently the feeling is still strong in business as in politics that two wrongs make a right.
• Shop online and support CESJ’s work! Did you know that by making your purchases through the Amazon Smile program, Amazon will make a contribution to CESJ? Here’s how: First, go to https://smile.amazon.com/.  Next, sign in to your Amazon account.  (If you don’t have an account with Amazon, you can create one by clicking on the tiny little link below the “Sign in using our secure server” button.)  Once you have signed into your account, you need to select CESJ as your charity — and you have to be careful to do it exactly this way: in the space provided for “Or select your own charitable organization” type “Center for Economic and Social Justice Arlington.”  If you type anything else, you will either get no results or more than you want to sift through.  Once you’ve typed (or copied and pasted) “Center for Economic and Social Justice Arlington” into the space provided, hit “Select” — and you will be taken to the Amazon shopping site, all ready to go.
• Blog Readership.  We have had visitors from 24 different countries and 37 states and provinces in the United States and Canada to this blog over the past week. Most visitors are from the United States, Spain, Canada, the United Kingdom, and the Philippines.  The most popular postings this past week in descending order were “News from the Network, Vol. 12, No. 39,” “How Commercial Banks Create Money,” “Repo Men?,” “Some Thoughts on Fractional Reserve Banking,” and “Is Liberty Diabolical?”
Those are the happenings for this week, at least those that we know about.  If you have an accomplishment that you think should be listed, send us a note about it at mgreaney [at] cesj [dot] org, and we’ll see that it gets into the next “issue.”  Due to imprudent language on the part of some commentators, we removed temptation and disabled comments.
#30#
Posted by Michael D. Greaney at 6:00 AM