Money and the Invisible Hand


This will allow us to come to a better understanding of what money and credit are by looking at what money and credit do . . . or are supposed to do if the financial system and the economy are set up in accordance with the principles of economic and social justice and, frankly, just plain common sense.
Contrary to popular myth, Smith is not the High Priest of Laissez Faire Capitalism and the Apostle of Greed.  Although his “invisible hand” argument has been used to justify the belief that “greed is good,” nowhere did Smith ever make that claim.
Instead, what he said — using the invisible hand as a metaphor for a properly arranged economic and financial system — was that, assuming that people act in conformity with the principles that guide how the system functions, the system will operate for the benefit of everyone.  This is in spite of the greed and rapacity of the rich, not because the rich are being selfish and greedy.  The system will do good even if the people using the system intend no such thing.
To illustrate, take the system of roads as an example.  If drivers always stop at red lights in the manner prescribed by the system, then people will be able to cross the street at the light safely and cross traffic can proceed without causing a wreck.  Does every driver who stops at a red light do so in order not to hit pedestrians or refrain from causing wrecks?  Of course not.  Many people stop at a red light because the rules of the system say that is what must be done.
Thus, even though a driver does not intend that any good result from stopping at a red light, even though he may curse rather loudly and view it as a great inconvenience, if he obeys the law requiring that he stop at a red light, no one will be hurt.
At the same time, suppose that someone who intends only good refuses to stop at a red light . . . even for the best of reasons.  He is late for work and doesn’t want to get fired; she is picking her kids up at school and doesn’t want them standing around in the rain; whatever.
A great deal of damage can be done by someone who tries to circumvent the system, even with the best of intentions.  The driver who is cursing everybody and everything because he caught yet another red light is benefiting society by staying within the system, while the driver who intends only good goes outside the system and people die when he runs them down while going through a red light.
Thus, as Smith pointed out, the greedy and rapacious individual who does not intend to do good, indeed, doing good is the furthest thing from his mind, nevertheless benefits society when he pursues his self-interest but stays within the parameters of the system.  This is because he cannot benefit himself except by benefiting others, whether or not he wants to. 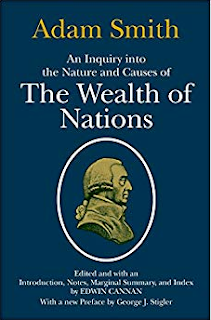 In the labor-centered economy that Smith was looking at, even the greediest individual could not satisfy any but his most minimal desires except by employing others to work for him.  At the same time, people who claimed that others should be provided with what they need without having to produce something greatly harmed society, for if people could get what they needed without being productive, they would have no incentive to produce anything.
Thus, in a sense, Smith’s invisible hand argument is the corollary to his first principle of economics.  As he expressed it in The Wealth of Nations, “Consumption is the sole end and purpose of all production.” (Adam Smith, An Enquiry into the Nature and Causes of the Wealth of Nations, IV.8.49.)  In other words, in a rational system, nothing is produced that is not intended to be consumed by someone.  Producing for any other purpose amputates the invisible hand (so to speak) by attempting to circumvent the system.
This, in fact, was one of the biggest mistakes made by John Maynard Keynes.  Instead of producing solely and exclusively for consumption, Keynes said the economy must produce a surplus to provide savings for new capital investment.  There must be goods produced that are not for consumption in order to be able to accumulate savings to produce more unconsumed goods in the future!
But if you don’t produce except to consume, then — obviously — you can’t consume unless you produce!  And that leads us directly to Say’s Law of Markets, which we will look at in the next posting on this subject.
#30#
Posted by Michael D. Greaney at 6:00 AM