The End of Democracy

As we saw in the previous posting on this subject, had he not been assassinated, there is evidence suggesting that Abraham Lincoln would have used the 1862 Homestead Act as the first step on a total social reformation, putting the financial system on a sound basis and opening up opportunities for everyone to own capital other than land.


Compared to what prevailed in Europe, however, the situation in the United States was sometimes idyllic, especially for ordinary people.  Still, following the Civil War, America began experiencing the results of flaws inherent in the system as applied, or that had been introduced into the system contrary to the founding principles of the country.
Slavery had been abolished, but at a terrible cost, both in lives and in the often-unnoticed fundamental change in the philosophy of law and government.  The Fourteenth Amendment overturned the Dred Scott decision, but had not been tested.
That soon came, however, as a direct result of the greed of the carpetbaggers who swarmed into the former Confederacy to grab as much as they could.  Of these, one of the worst was Louisiana governor Henry Clay Warmoth (1842-1931), “a shrewd, avaricious and unscrupulous man.” (“The Louisiana Thieves,” New Orleans Commercial Bulletin, Monday, August 8, 1870.) At his direction, the state legislature established the “Crescent City Live-Stock Landing and Slaughter-House Company.”  This was a monopoly over the entire slaughtering business in and around New Orleans to be owned by friends of Warmoth.
The butchers, mostly former Confederate soldiers, sued, and “the Slaughterhouse Cases” of 1873 went all the way up to the United States Supreme Court.  In what William Crosskey called a contradictory and “most craftily written decision” (Crosskey, Politics and the Constitution, op. cit., 1130), the 5-4 judgment completely nullified the Fourteenth Amendment and reinstituted the Dred Scott decision that took sovereignty away from human beings and vested it in the collective. 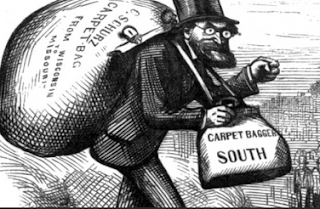